Question 1.
How is sex-ratio calculated?
Answer:
Sex ratio can be calculated with the number of females per 1000 males in the population.

Question 2.
As 2011 Census, the population has increased to 121 crores approximately in India. Write any two reasons for it.
Answer:

Question 3.
Give the main reason for decreasing the death rate during the last decade in India.
Answer:

Question 4.
Observe the following table and answer the questions a, b, c and d.

(d) How do you understand female literacy?
Answer:

Question 5.
Observe the given bar graph and answer the questions. 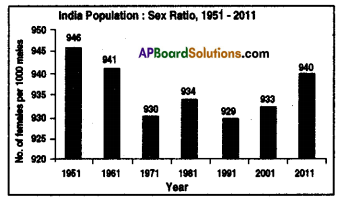 (c) What do you mean by sex ratio?
Answer:
Sex ratio is the number of females per 1000 males in the population.

(d) Mention the reason behind the low female population in India.
Answer:

Question 7.
Observe the following table and answer questions a and b.
Census 2011 – Data related to literacy rate in Kerala and Bihar

(a) What is table about?
Answer:
The table is about literary rate in Kerala and Bihar considering census 2011.

Question 9.
What is important regarding population study?
Answer:
It is important to understand population numbers, its distribution and characteristics that provide the basic background for understanding and appreciating the other aspects.

Question 11.
What is a census?
Answer:
A census is a procedure of systematically acquiring and recording information about the members of a given population.

Question 12.
Who collects the census?
Answer:
A central government institution, the Census of India, organizes the collection and record¬ing of this information.

Question 16.
What is sex ratio?
Answer:
Sex ratio is the number of females per 1000 males in the population.

Question 19.
What does the census show regarding child births? Give reasons for that.
Answer:
The census shows that in the age group 0-5, the number of girls who survive is much lower than boys. This can only happen if there is some discrimination in their care and nutrition otherwise the physical chance of survival is better for girls.

Question 21.
Give an example of the state which has positive sex ratio.
Answer:
Kerala.

Question 22.
What are the reasons for female foetus infanticide?
Answer:
Due to the preference for male children parents may decide to abort female child before birth. Many adults consider female children as a burden.

Question 23.
Write about women’s education.
Answer:
Women’s education has been a powerful force in reducing discrimination against women. There is definitive evidence that women’s literacy and schooling reduce child mortality and work against the selective neglect of the health of girls.

Question 25.
What is literacy?
Answer:
Literacy: Literacy is key for socio-economic progress.

Question 29.
What is birth rate?
Answer:
Birth rate is the number of live births per thousand persons in a year.

Question 30.
What is death rate?
Answer:
Death rate is the number of deaths per thousand persons in a year.

Question 31.
What is the change in birth rate and death rate at present?
Answer:
There has been the rapid decline in death rates but till recent times, birth rates were not decreasing substantially.

Question 32.
Why did the famines decline after 1900?
Answer:
After 1900 famines declined because of famine relief, movement of grain, ration shops and an active public voice in a democracy.

Question 35.
What is the change in population size? How it can be expressed?
Answer:
The change in the size of a population is the difference in the number of inhabitants of a country/territory during a say during the last ten years. Such a change can be expressed in two ways, (1) as absolute numbers, or (2) as a percentage change.

Question 36.
Write some reasons for population growth in India.
Answer:

Question 38.
Why do the plains have very high density of population?
Answer:
The northern Plains and the plain in the south have, high to very high population, densities, because of the flat plains with fertile soils and abundant rainfall.

Question 1.
Read the following paragraph.
A distressing aspect of gender bias in India that shows little sign of going away is the preference for boys over girls. One of the worst manifestations of this pro-male bias is the relatively high mortality rates of girls compared with boys. Many families consider female children as a burden. Women’s education has been a powerful force in reducing discrimination against women.
“Due to the difference in sex ratio, what would be the impact on society ?” Explain.
Answer:

Question 4.
Study the following graph and answer the given questions. 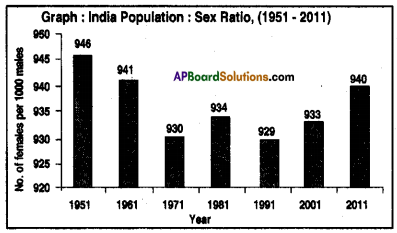 a) In which year, the highest sex-ratio was recorded?
Answer: 1951.
b) Identify the reasons for low sex-ratio in India.
Answer:

Question 6.
Write your observations about the population growth in india, from the graph given below: 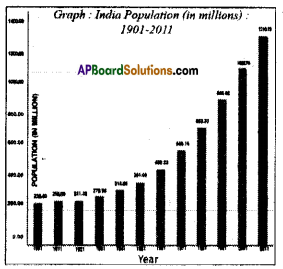 Answer:
I observed the following reasons:

The other factors which are responsible for high growth rate of population:

Question 7.
Observe the following graph and write a paragraph analyzing it. 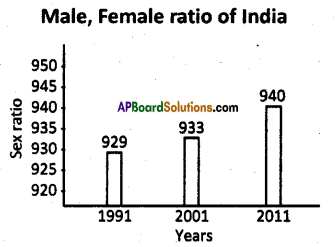 Question 9.
Give some examples of gender discrimination.
Answer:
Women and girls in particular face unequal opportunities for education and development. In the most basic needs of nutrition, child care and health also they are discriminated against – they get less of these things than males. This can happen even within the same family. This discrimination is not always obvious. Nor is it accepted.

Question 10.
What is rate or pace of population increase?
Answer:
The rate or the pace of population increase is important. It is studied in per cent per annum, e.g.: a rate of increase of 2 per cent per annum means that in a given year, there was an increase of two persons for every 100 persons in the base year. This works like compound interest. This is referred to as the annual growth rate. India’s population has been steadily increasing.

Question 11.
Describe the categories of the working population.
Answer:
The Census of India, groups the working population into four categories. Cultivators are farmers, who farm or supervise the land that they own or take on rent. Agricultural labourers are those who work on another’s farm for wages in cash or kind. Workers in household industries would be those who are manufacturing or repairing some product at home such as dehusking of paddy, bidi workers, potters, weavers, repair of footwear, manufacture of toys, matches, etc. Other workers would be those who are employed in factories, trading, casual labour and all other occupations.

Question 12.
Why did the birth rate remain high for such a long period?
Answer:
One set of reasons has to do with what has happened in the past. If in the overall population the percentage of young people is high, then in the coming years they would grow up, get married and have children. The total number of such children added would be high because we began with a population with a large number of young people.
The other reason is the number of children that couples wish to have. This in turn is related to how many children survive, what social security people have and the preference of male child in society. 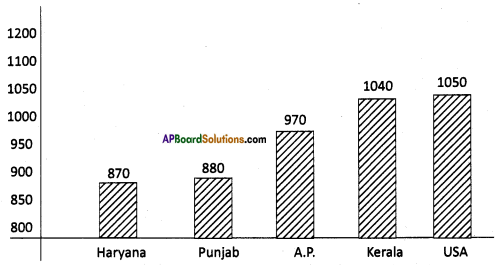 Question 15.
It is noted that within India certain parts like Kerala have a positive sex ratio. How can you appreciate it?
Answer:

Question 16.
“Over population creates many problems” Do you support this statement? Write in your own words.
Answer:

Question 1.
Answer the following of questions based on the graph given below. 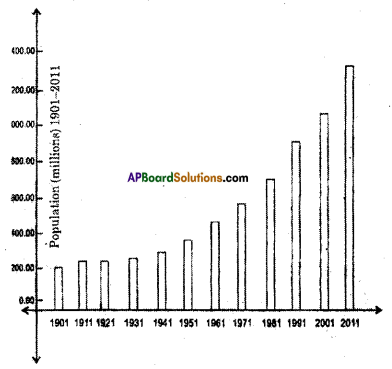 Question 2.
Observe the following graph and answer the questions that given below. 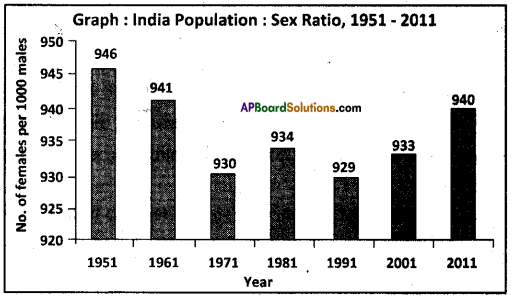 Question 3.
Observe the graph given below and answer the following questions. 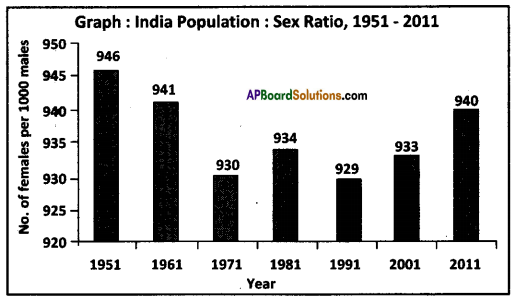 Question 4.
Study the graph and answer the following. 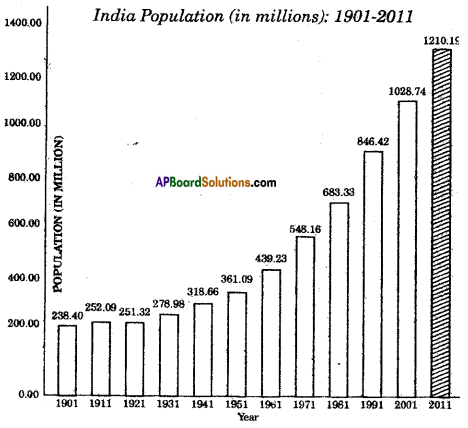 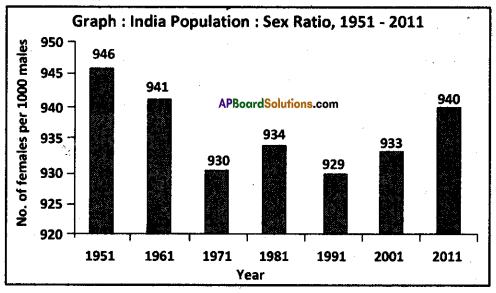 Question 8.
Plot the below information on a bar-graph. Write your observation.
Table : India Population: Sex Ratio 1951 – 2011

Question 9.
Read the given paragraph and comment.
We often hear people talk of population growth in alarming tones. These people are often literate and talk about others not benefitting because there are too many people who have to share very few resources.
Answer:
According to the given paragraph, the population growth affects many ways people should aware of this and the literate people talk about the benefits share of resources is not balancing. Very few people are using more resources whereas many people are using very less resources.
Countries like USA are using more natural resources though its population is less than 5% of the world population. In India, it is less than 16% of the population of the world is using less natural resources. In India population is steadily increasing. If population increases in this way, one day India would be the first in world population. Population is not a curse to the country development, it is a boon for the development of the country. People in any country can be divided into three categories. They are skilled, semi-skilled and unskilled. The Government has to utilise the services of the skilled for the nation’s development. The semi skilled should be made skilled. The unskilled should be provided with some training and so they would be doing some sort of productive work which would be strengthening Gross Domestic Product. Equal distribution of resources should be the target of the Government. The underdeveloped countries should focus on improving the qualities of work force. So population is not a problem. It’s a boon.

Question 10.
Observe the population pyramids and answer the questions. 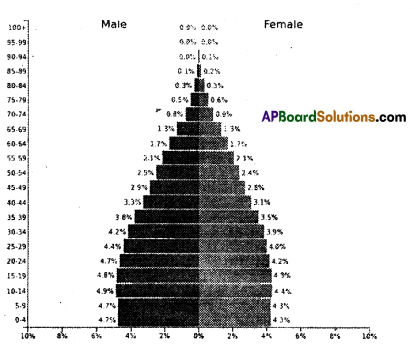 Question 11.
Read the following paragraph and write your opinion on it.
The third component of population change is migration. Migration is the movement of people across regions and territories. Migration can be internal (within the country) or international (between the countries). Internal migration does not change the size of the population but influences the distribution of population within the nation. Migration plays a very significant role in changing the composition and distribution of the population.
Answer:

Question 12.
Read the following paragraph and interpret.
Think of various ways in which the government should have special schemes for different groups. Examples could be midday meal schemes; Anganwadi programmes, etc. Why are they necessary?
Answer:

Question 13.
Read the following paragraph and write your comments.
Women’s education has been a powerful force in reducing discrimination against women. There is definitive evidence that women’s literacy and schooling reduces child mortality and work against the selective neglect of the health of girls.
Answer:

Question 14.
Read the following paragraph and interpret.
Why did the birth rate remain high for such a long period? One set of reasons has to do with what has happened in the past. If in the overall population, the percentage of young people is high, then in the coming years they would grow up, get married and have children. The total number of such children added would be high because we began with a population with a large number of young people.
Answer: 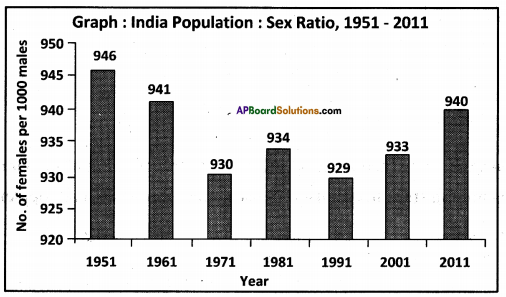 Question 16.
Observe the graph and describe it. 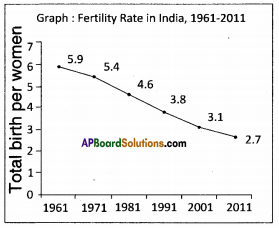 Question 18.
“Over population creates many problems”. Do you support this statement? Write in your own words.
Answer:

Question 19.
Locate the following in the given map of India. 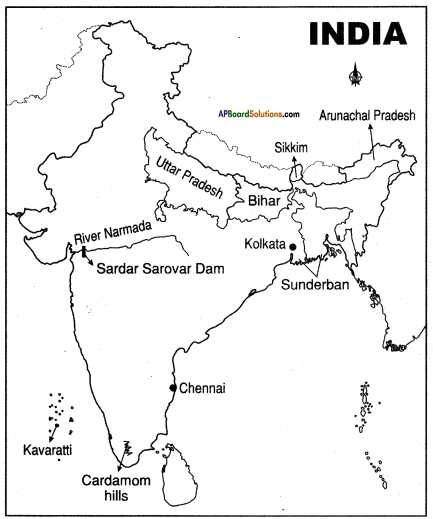