Question 1.
Read the given may and answer the question:

In which state, Indira Sagar Project is located and on which river?
Answer:
Madhya Pradesh, River Narmada.

Question 2.
Identify one state for each movement in given India’s political map relating to the following social movements.
Answer: 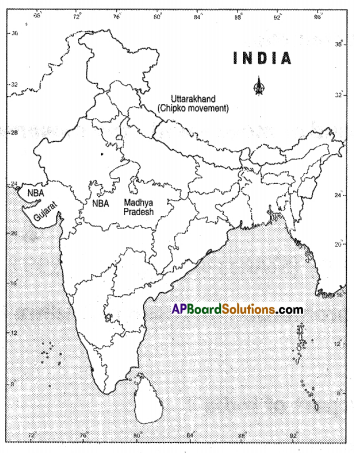 Question 10.
In which year was arrack officially banned?
Answer:
In 1993.

Question 13.
Which decades saw a new kind of movement – the movement against war and nuclear arms?
Answer:
The 1970s and 1980s.

Question 15.
When was the total arrack prohibition imposed in Andhra Pradesh?
Answer:
In 1995.

Question 17.
When did the Greenpeace Movement start in Europe?
Answer:
The Greenpeace movement initially started as a protest in 1971 against the American underwater nuclear tests near Alaska.

Question 1
Do you agree with the view that equal participation of men and women and equal opportunity for them is necessary for freedom and development of the country?
Answer:

Question 2.
What were the reasons for the American civil rights movement?
Answer:

Question 3.
Read the map given below and answer the following questions.

i) In which state, was Sardar Sarovar Project constructed?
Answer:
Gujarath.

ii) Name the movement that was held against the construction of dams on river Narmada.
Answer:
Narmada Bachao Andolan.

Question 6.
What would you do, if you were to solve the problem of liquor prohibition?
Answer:

Question 7.
During the last few decades, why is the pollution increasing day by day?
Answer:

Question 8.
What were the four main demands of Bhopal gas victims?
Answer:

Question 9.
Prepare a pamphlet on the importance of the Environment.
Answer:

Question 10.
Read the following paragraph and write your opinion.

“A large section of people who actively participated in the civil rights movement were black women, who felt that their voice was not being heard even within the movement which was dominated by men. In fact, no woman was allowed to speak in the famous Washington March. They felt that women needed to assert themselves for the equality of women.”

Answer:
This paragraph is about the inequalities in the society. Women discrimination is discussed. Their voice was not being heard. It means they were not allowed to say what they demand. Many of the black women participated in the Civil rights movement but not even a single woman was allowed to speak is the March. The women came to know that they should fight for their rights.

There was strong discrimination between the Whites and the Blacks. Especially the black women had no rights. The Americans purchased the black people from Nigeria and other African countries as if they purchase different commodities. They were treated as slaves. In 1960s there was a segregation of blacks and whites in schools, buses and public places. The blacks were discriminated against in appointments, housing and even in voting rights. So there was a movement against this discrimination.

White Aryan supremacy was the reason for this segregation. The Americans, the English, and French, and the Germans feel that they are Nordic race and their race is the supreme one. Dr. Martin Luther King delivered a speech that he had a dream that his children would one day live in a nation where they would not be judged by the colour of skin.

Special status is being given to some people based on their birth or position. In these days, everyone is coming out for study and employment. As this was not there, the movements began. Nowadays the women occupied many high positions. Banks, political parties are also being run by the women. About five states in India are being ruled by the women. Many IAS, IPS officers are there from women.

In conclusion, the women should be given priority, even in family matters. The head of the family may be the women. She could play a crucial role in taking decisions. Equal rights are to be given to women. They should be encouraged for higher education. There voice is to be given respect. In political scenario the wives of leaders occupied some positions but their husbands are ruling. This shouldn’t happen. Let the elected rule of themselves. I hope to see the world without any sort of discrimination.

Question 12.
What is the result of the anti-nuclear movement?
Answer:

Question 13.
What is the effect of globalisation on people?
Answer:

Question 14.
Read the passage and answer the following question.

“We, the undersigned, as American men of draftage, may be asked by our government to participate in the war in Vietnam. We have examined the history and the nature of this war, and have reached the conclusion that our participation in it would be contrary to the dictates of our consciences.

We therefore declare our determination to refuse military service (all citizens are required to do so by law) while the United States is fighting in Vietnam. Our intention in signing this statement is to unite with other draftage men who share our convictions, in order to turn our personal moral rejection of this war into effective political opposition to it.”

Give your opinion on the above article.
Answer:

Question 16.
‘The second half of the 20th -century was an era of growth, prosperity and growing tensions’ – Comment.
Answer:

Question 17.
Write the names of any two important treaties among the nations to prevent nuclear weapons.
Answer:
The USA and the USSR, the main competitors in the arms race began talks to cut down their nuclear arsenal.

Question 18.
Read the given passage.

Manipur today is composed of two distinctive geographical terrains: the valley and the hills. Before independence, the valley was under princely rule and the hill areas were relatively autonomous, mainly inhabited by the tribal population. In 1891 the British established their I control over the region though the king continued to rule the kingdom. The kingdom of Manipur signed a merger agreement with India in 1949 and Manipur was made a part of India. This agreement was disputed by many tribes which argued that they had been autonomous and did not agree to be a part of India.

Question 19.
The raise in the price level of oil will severely affect the social life-Express your opinion.
Answer:

Question 1.
Write an essay on ‘Appreciating the prominence of the basic features of Social Movements”.
Answer:

Question 3.
Explain the impact of globalisation and neo-liberalism on the lives of marginalised people.
Answer:

Question 5.
Observe the following table and write a paragraph analysing it.

Question 6.
Write about the advantages and problems the people faced, due to the construction of Dams.
Answer:
Advantages: They do not only help in irrigation but also in electricity generation, water supply for domestic and industrial uses, flood control, recreation, inland navigation and fish breeding.
Disadvantages: Due to the Dam construction people lost their fertile land. Tribal people lost the forest land and their livelihood. People are displaced from their native place to other places. It maintains more expenditure also. It also induced earthquakes, caused water-borne diseases and pests and pollution resulting from excessive use of water.

Question 7.
Read the following paragraph and write your opinion.

The economic and political changes happening world wide since 1990s, which go by the name pf ‘globalisation’ or ‘neo-liberalism’ have deeply impacted the lives of the underprivileged and poor. Tribal people, poor farmers, landless workers, women, urban poor working in the unorganised sector and industrial workers have been the worst hit. By and large these are also the people without access to formal education or adequate nutrition and health.

Answer:
This paragraph is about the consequences of globalisation. It mainly influences the poor people and tribal people and it affects workers working in the unorganised sector. The people who are illiterates and under-nutritious are mostly affected.

Due to technological advancement, various machinery came out. The developed technology is influencing all the sectors. In agriculture combined harvesters, threshers are used. Tractors and transplantation machines are used and so labourers lost their livelihoods Due to railways and dams the tribal people are affected. When railways are taken up for extension many of the trees are cut for keeping under the rails. Hence the forest dwellers face problems of displacement. When government plans for constructing dams to increase irrigation facilities it is compulsory to
construct near forests. These lead to the displacement of tribal people. Many of these people are illiterates. Many tribal people lost their livelihoods such as collecting honey, nuts and seeds. Industrial belts also increased near the outskirts of cities and towns. This leads to pollution. Many rural illiterates are affected by this. Computers, IT,

Telecommunication, transportation increased and so the poor and the tribals are impacted.
My suggestion to the government is that it should take care of the people about their displacement. Proper compensation is to be given on time. Officers also should implement existing laws.

Question 8.
What are the ways in which the Black Americans protested with the government?
Answer:

Question 9.
Read the following paragraph and answer the question.

Initially, the Sardar Sarovar Project was expected to be built with money borrowed from World Bank. After Intense protests, mobilisation, marches, hunger fasts and an international campaign World Bank decided to withdraw its funding.

Is it possible to build factories or projects or powerplants without throwing out farmers or tribal people?
Answer:

Question 10.
Answer the following questions after studying the table.

Question 11.
Answer the following questions after studying the table.

Read the passage and answer the following questions.
a) Which article protests, against the arbitrary arrest?
Answer:
Article 9.

b) What are the provisions of Article 10?
Answer:
According to article 10 everyone is entitled to a fair and public hearing by an independent and impartial judiciary.

Question 13.
Read the information and answer the following questions.

a) Write about civil rights movement of the USA.
Answer:
It was a movement to protest against discrimination of blacks in the USA in 1960s.

b) In which place Anti-Arrack movement in A.P. occurred?
Answer:
In Nellore District.

d) Who were the leaders of Human Rights Movement of the USSR.
Answer:
Alexander Solzhenitsyn and Andrei Sakharov.

Question 14.
What were the demands of the people of Bhopal regarding the great tragedy?
Answer:

Question 15.
Locate the following points on the outline map of world. 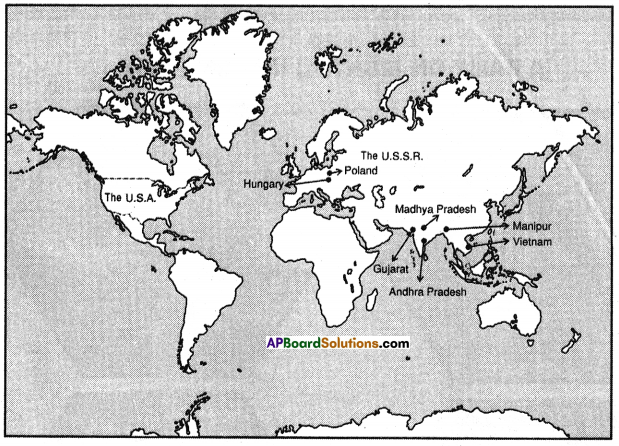 Question 16.
Locate the following in the given map of World. 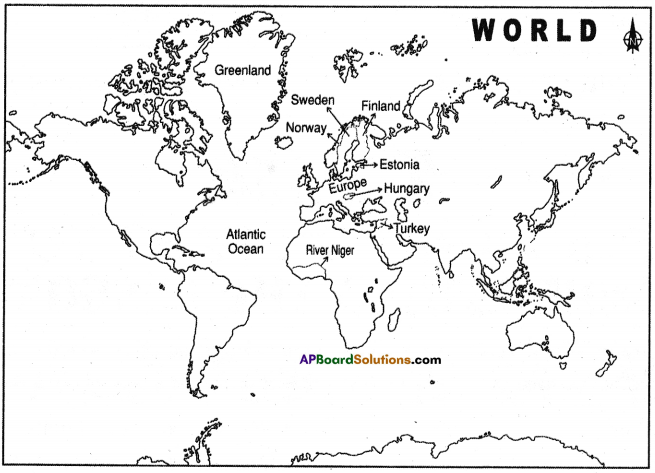