Question 1.
The sun rises two hours earlier in Arunachal Pradesh as compared to Gujarat in the west. But the clocks show the same time. How does this happen?
Answer:

Question 2.
If the Himalayas would not have been in its present position, how would be the climat conditions of the Indian sub continent?
(OR)
What is the geographical impact of the Himalayas in influencing the Indian climate?
Answer:

Question 3.
The Himalayas do not extend into which of the following states :
Madhya Pradesh, Uttar Pradesh, Sikkim/Haryana, Punjab, Uttaranchal.
Answer:

Question 4.
Which are the major physiographic divisions of India? Contrast the relief of the Himalayan region with that of the peninsular plateau.
Answer:

(OR)
Answer:
Influence of the Himalayas on Indian Agriculture: 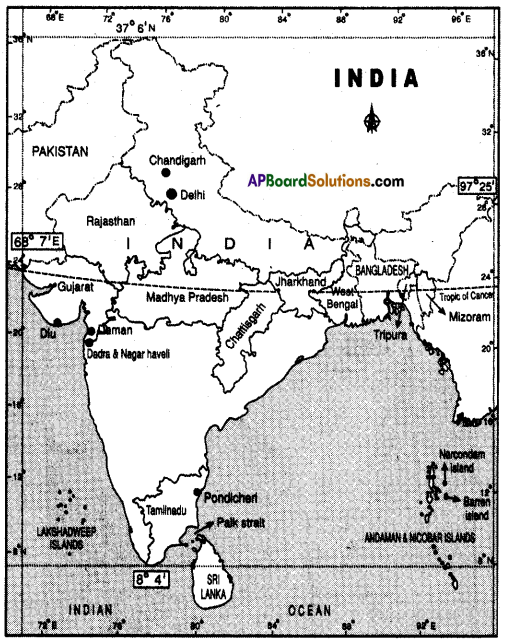 Question 10.
Plateau regions in India do not support agriculture as much as the plain regions -what are the reasons for this?
Answer: 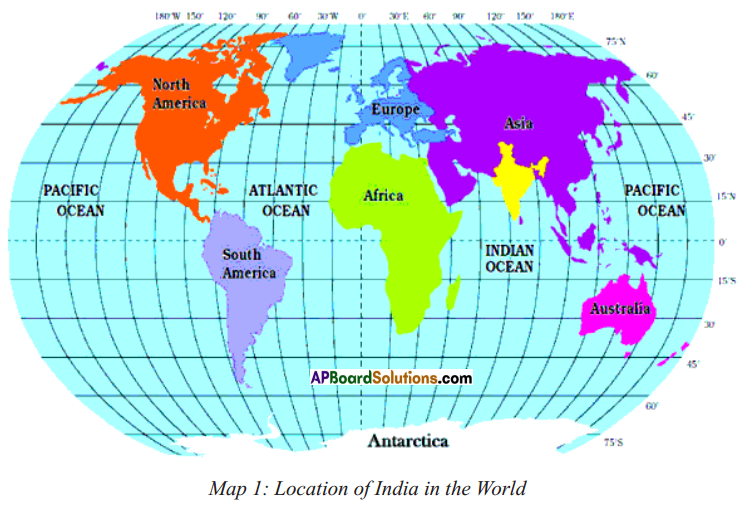 Look at the world map given above, and write a few lines about India’s location with reference to the places marked on this map.
Answer:
India is located to the north of the equator between 8°4′ and 37°6′ north latitudes and 68°7′ and 97025′ east longitudes.

Question 3.
Why do we often use the term “Indian peninsula”?
Answer:

Question 8.
Look at the map 2 on text page 3 and trace the boundary for India and colour this.
With the help of the scale given on the map, find out the total land boundary that India shares with Bangladesh. 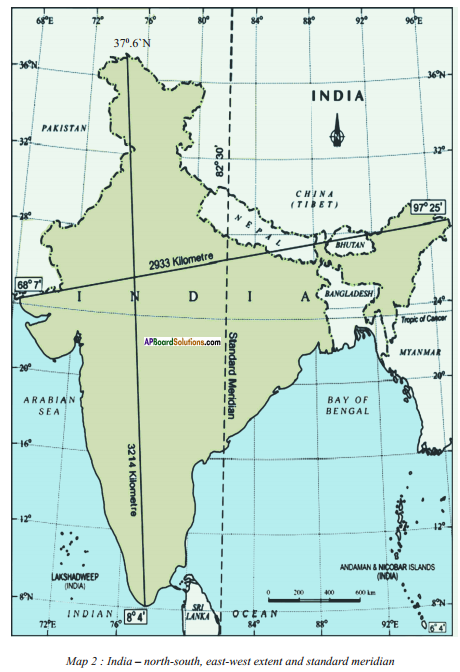 Answer:
The total land boundary that India shares with Bangladesh is 4,096.70 km.

Question 9.
Which of these data are for rising and setting times for the Sun at Ahmedabad and Imphal ?

Question 12.
Look at the Map 2 (on test page 3)and the raised relief map in your school. Using your finger trace the regions mentioned below:
a) Follow the course of Godavari and Krishna to identify the direction of slope of Deccan plateau.
b) Describe the entire course of the Brahmaputra River, with reference to landforms, heights, and countries.
Answer:
a) The direction of slope of Deccan plateau is West to East.
b) The course of Brahmaputra is with reference to 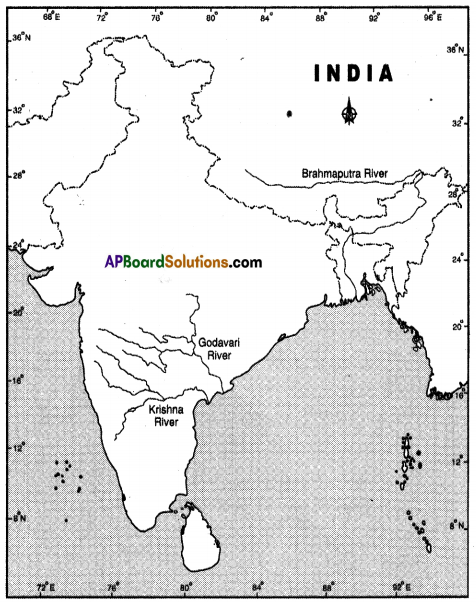 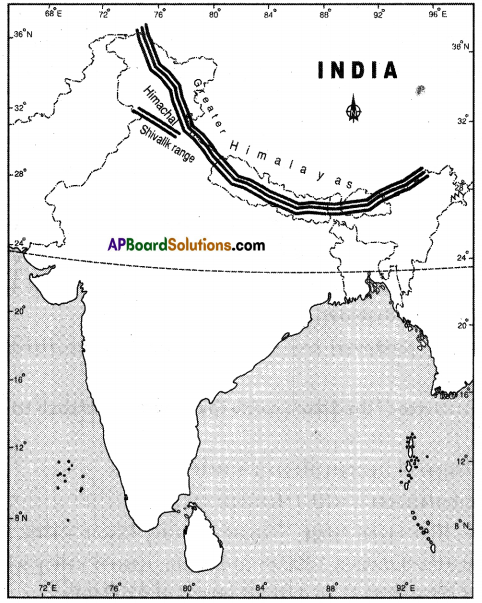 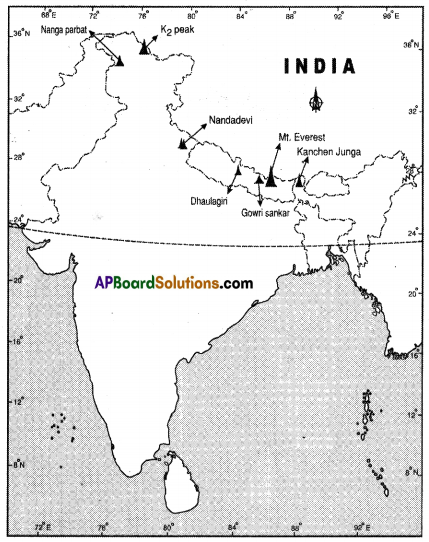 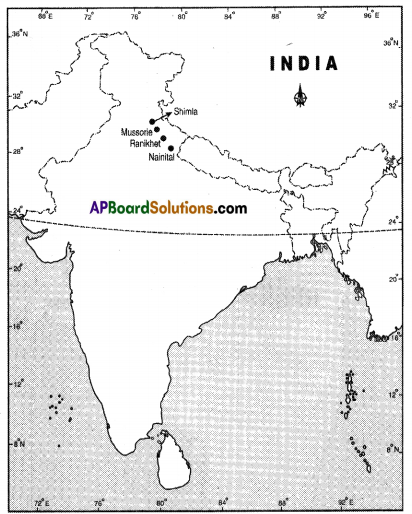 Question 17.
Locate the following ranges in the physical map of India. 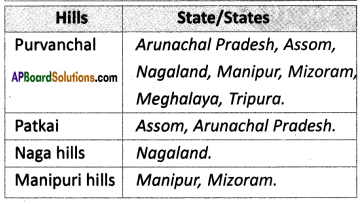 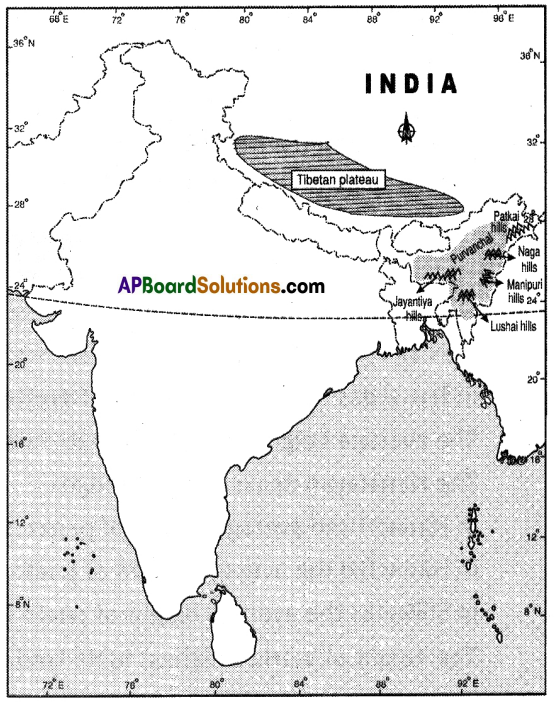 Question 18.
Locate the following on the Indian physical map of your atlas and on the raised relief map: Malwa plateau, Bundelkhand, Bhagelkhand, Rajamahal Hills and Chotanagpur plateau.
Answer: 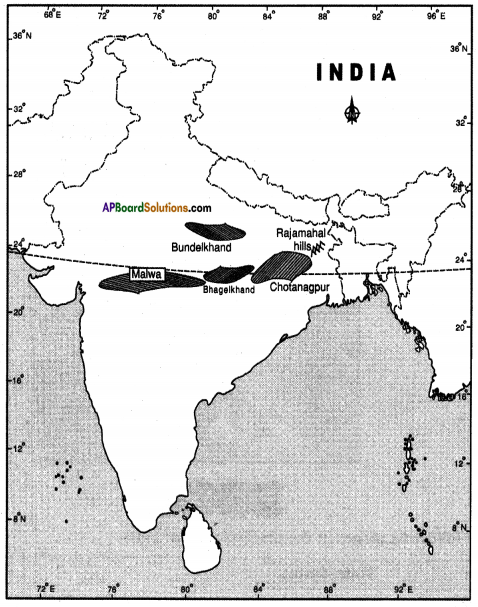 Question 21.
On the physical map of India identify the delta regions. How is their height similar or different ?
How do they compare in relation to the Indo-Gangetic Plains ?
Answer:
The height of these deltas is similar between 0 and 300 metres. The northern plain and deltas both are agriculturally developed. 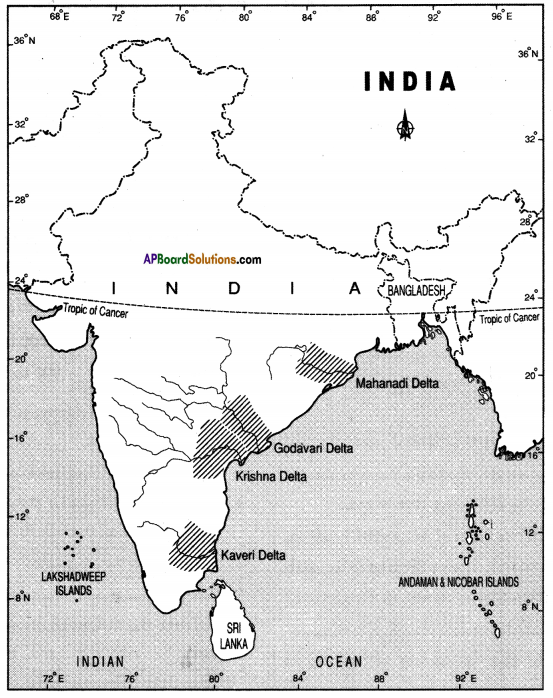 Question.
Using the raised relief map, and physical maps in your atlas make clay/ sand models of India on the ground. Use different types of sand or soil to mark different types of relief features. Ensure heights of the places are proportional and rivers are marked. Look at the vegetation map in your atlas and try to use leaves and grasses to decorate them. May be over the year you can also add other features of India into them.
Answer: Students’ Activity.