Question 5.
What is the Arab Spring?
Answer:
In 2013 several nations in Western Asia and Northern Africa like Tunisia, Egypt was influenced by each other’s revolutions and uprooting of dictators. This was called ‘Arab Spring’ in the media.

Question 6.
Mention any two factors which led to Globalisation.
Answer:
Globalization is a process of connecting countries across the globe.
Technology, Liberalisation of foreign trade and investment, foreign investment policy, WTO and other global institutions led to this globalization.

Question 7.
What is an MNC?
Answer:
An MNC is a multinational corporation, owns and controls production in more than one nation.

Question 9.
What is the investment?
Answer:
The money that is spent to buy assets such as land, building, machines and other equipment is called investment.

Question 10.
What is foreign trade?
Answer:
Foreign trade is any kind of trade with other countries of the world.

Question 11.
What do you mean by trade barrier?
Answer:
It is called a barrier since some restrictions have been set up by the Indian government on foreign trade and foreign investment. It can be tax on imports.

Question 12.
What is Globalisation?
Answer:
Globalization is a major change that occurred across the globe in the late 20th century. This has political, cultural as well as economic dimensions.

Question 17.
What is Outsourcing?
Answer:
Outsourcing means going out to a source outside the company to buy regular service.

Question 18.
How many countries are currently members of the WTO?
Answer:
The WTO has 164 member countries as on 29th July 2016.

Question 19.
In which year, the government started to remove barriers on foreign trade and foreign investment?
Answer:
In 1991.

Question 22.
Which organization lay emphasis on liberalization of foreign trade and foreign investment in India?
Answer:
The WTO.

Question 24.
Where is the main head office of the WTO?
Answer:
It is in Geneva – Switzerland.

Question 25.
What is the purpose of foreign trade?
Answer:
Foreign trade creates an opportunity for the producers to reach beyond the domestic markets. They can sell their products in other countries also.

Question 26.
State a positive aspect of India’s development strategy prior to 1991.
Answer:
The strategy has helped India in creating a large industrial base and an increase in industrial production.

Question 27.
What do you mean by export quotas?
Answer:
For the protection of local consumers, the government restricts giving limit of export of particular goods. This is called an export quota.

Question 28.
What is an import quota?
Answer:
For the protection of local manufacturers from the competition of producers of another country, the government imposes taxes on imported goods. This is called an import quota.

Question 29.
State any two impacts of liberalization and globalization in India.
Answer:

Question 31.
What is meant by modernization of the economy?
Answer:
The NEP accords top priority to modern techniques and technologies. It also promotes computers and electronics industries. It has made the Indian industries dynamic.

Question 32.
What is Joint Venture?
Answer:
At times MNCs set up production jointly with the local companies of the countries where they established their MNC operations.

Question 1.
Explain the effects of Globalisation in India.
Answer:

Question 7.
What will be the consequences of Globalisation, if it spreads to all sectors in future?
Answer:
More products will be available if globalization process is continued and spread. Quality of goods will be increased prices come down. Foreign investment is increased. Many new jobs will come up. IT services will be increased. Technology will be more used. Small scale industries will be closed. Culture and nationalism are also affected. Soil lose its fertility.

Question 8.
What do you understand by globalization?
Answer:
Globalization is a process associating with increasing openness, growing economic independence and deepening economic integration with the world economy. In other words, it means opening up of the domestic economy for foreign countries.

Question 9.
What is the role of media in ‘Arab Spring’?
Answer:
Media played a crucial role during the Arab Spring. Television Channels that were owned and run by people from other countries supported such mobilization which resulted in regulating the powers of local leaders. While events like Civil War or natural disasters like Tsunami are discussed within the national boundaries they also receive support and sympathy from around the world.

Question 10.
Give a picture of ‘Production across countries before large MNCs’.
Answer:
Until the middle of the twentieth century, production was largely organized within countries. Raw materials, food grains and finished products only crossed the boundaries of these countries. Colonies such as India exported raw materials and food grains and imported finished goods. Trade was the main channel connecting distant countries. This was before large multinational corporations (MNCs) emerged on the scene.

Question 11.
What is important regarding MNCs?
Answer:
MNCs not only sell their finished products globally but more important, the goods and services are produced globally. As a result, production is organized in increasingly complex ways. The production process is divided into small parts and spread out across the globe.

Question 12.
“Previously important decisions regarding the value of currency were taken by sovereign governments are today made by market player and forces”. Comment with an example.
Answer:

Question 1.
What is the influence of globalization on the Indian economic system? What are the advantages of extending globalization to India? Express your opinion.
Answer:

I support the setting up of Special Economic Zones:
The reasons:

Question 3.
“Among producers and workers, the impact of globalisation has not been uniform.” Write your opinions on it.
Answer:

Question 4.
Explain the factors that have enabled Globalisation.
Answer:

Question 7.
How can flexibility in labour laws support the present companies?
Answer:

The developments in information and communication technology have been even more remarkable and rapid. Telecommunication facilities are used to contact one another around the world to access information instantly and to communicate from remote areas.

Answer:
The given paragraph is about developments in technology especially with regard to information and communication technology. It has various effects on society and made the task of many people easy.

In the fast-growing world, every field is being updated and upgraded. There are so many reasons for these changes in technology. Due to globalization, getting and sending information should be fast. Email, Google, Internet, Wikipedia all these made our task easy. People also changed their lifestyles. Even in mobile phones various activities like e-banking, different payments like electricity bill, phone bill are paid. Many of the GOs and Memos are sent by mail.

It has negative effects also. Some youth are attracted by abscence films and pornographic videos are watched. Students can utilise it for their study. The government should take necessary action.

The benefits of globalisation have been unevenly distributed. It has benefited well-off consumers and also producers with skill, education and huge wealth. Certain services, enabled with technology, have expanded. On the other hand, thousands of small producers and workers have seen their employment and workers’ rights erode. It is important to understand the two¬sided nature of globalisation.

Conclusion: Finally developed countries and rich people are benefited and poor people are not benefited.

Read the following paragraph and write whether you agree with this paragraph or not. Mention why/why not.

At times, MNCs set up production jointly with the local companies of these countries. The local company benefits by the additional investments and the latest technology that the MNCs bring.

For a long time trade has been the main channel of connecting countries. In history, you would have read about the trade routes connecting India and South Asia to markets both in the East and West and the extensive trade that took place along these routes. You would also remember that it was trading interests which attracted various trading companies such as the East India Company to India.

Question 12.
Read the following paragraph and write your comments on it.

To put it simply, foreign trade creates an opportunity for the producers to reach beyond the domestic markets. Similarly, for the buyers, trade expands the choice of goods beyond what is domestically produced. Foreign trade thus results in connecting the markets or integration of markets in different countries.

Question 13.
Read the following paragraph and write’ your opinion on it.

Rapid improvement in technology has been one major factor that has stimulated the globalization process. For instance, the past fifty years have seen several improvements in transporta¬tion technology. As a result, goods are delivered faster across long distances at lower costs.

Question 14.
Read the following paragraph and write your comments.

Let us return to the example of imports of Chinese toys in India. Suppose the Indian government puts a tax on the import of toys. And because of the tax, buyers will have to pay a higher price on imported toys. Chinese toys will no longer be as cheap in the Indian markets and imports from China will automatically reduce. Indian toy-makers will prosper.

Question 15.
Identify these countries on an outline map of world. 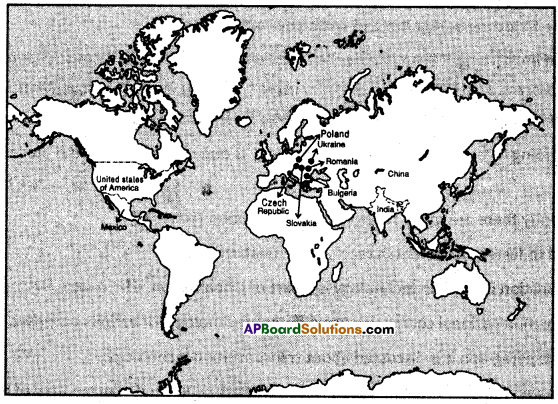