Question 1.
What is Fresnel distance ?
Answer:
“Fresnel distance is the minimum distance a beam of light has to travel before its deviation from straight line path becomes significant”.

Question 2.
Give the justification for validity of ray optics.
Answer:
The distances much smaller than ZF, the spreading due to diffraction is smaller compared to the size of the beam.

When the distance is approximately ZF, and much more than ZF, the spreading due to diffraction dominates over that due to ray optics (size of the aperature (a)]
Z = \(\frac{\mathrm{a}^2}{\lambda}\)
From this equation ray optics is valid in the limit of wave length tending to zero.

Question 4.
What is Malus’ law.
Answer:
Malus’ law : It states that the intensity of polarised light transmitted through the analyser varies as a square of cosine of the angle between the plane of transmission of analyser and polariser.
I ∝ cos2 θ; I = I0 cos2 θ.

Applications of Doppler effect in light:

Blue shift: When waves are received from a source moving towards the observer, there is an apparent decrease in wave length, this is called blue shift. 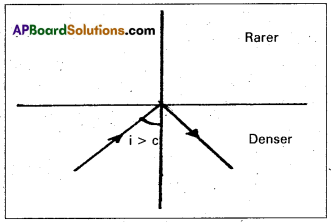 Huygen’s principle : According to Huygen’s principle, every point on the wavefront AB is a source of secondary wavelets and time during which wavelets from B reaches at C, Let \(\tau\) be the time taken by the wave front to advance from B to C.

Then distance BC = υ\(\tau\)
In order to construct the reflected wavefront, we draw a sphere of radius ux from point A.
Let CE represent the tangent drawn from C to this sphere.
AE = BC = υ\(\tau\) 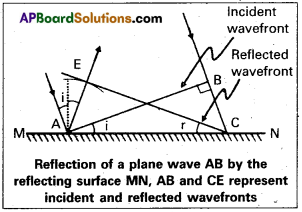 Consider the triangles EAC and BAC are congruent.
∴ Angles i and r would be equal. This is the law of reflection. 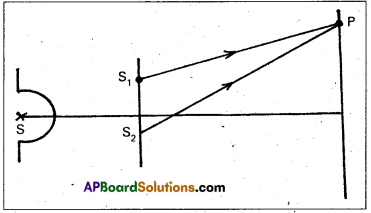 Question 4.
Does the principle of conservation of energy hold for interference and diffraction phenomena ? Explain briefly. (Mar. ’14)
Answer:
Yes, law of conservation of energy is obeyed. In case of constructive interference, intensity becomes maximum. Hence bright fringes are formed on the screen where as in the case of destructive interference, intensity becomes minimum. Hence dark fringes are formed on the screen.

Question 5.
How do you determine the resolving power of your eye ? (A.P. Mar. ’19)
Answer:
Make black strips of equal width separated by white strips. All the black strips having same width, while the width of white strips should increase from left to right.
Now watch the pattern with one eye. By moving away (or) closer to the wall, find the position where you can just see some two black strips as separate strips. 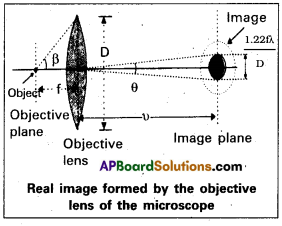 Note the width d of the white strips and measure the distance D of the wall from eye.
Then resolution of your eye = \(\frac{\mathrm{d}}{\mathrm{D}}\). 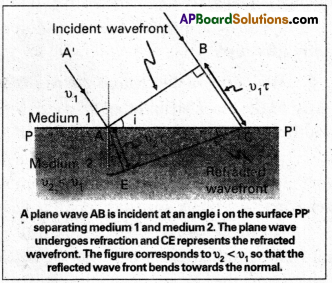 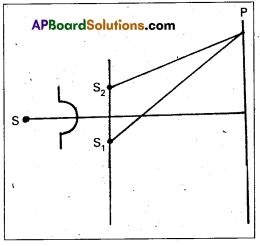 Question 3.
Describe Young’s experiment for observing interference and hence arrive at the expression for ‘fringe width’. ‘
Answer:
Interference : The modification of intensity obtained by the super position of two (or) more light waves is called interference.

i) It is the distance between two successive bright (or) dark fringes, denoted by p. 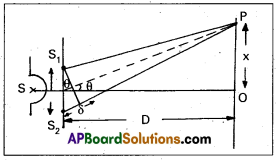 Question 4.
What is diffraction ? Discuss diffraction pattern obtainable from a single slit.
Answer:
Diffraction : The phenomenon of bending of light at the edges of an obstacle and light enters into the geometrical shadow is known as diffraction of light.
Example : The silver lining surrounding the profile of a mountain just before sunrise.

Diffraction of light at a single slit: 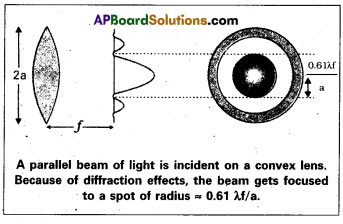 Derive the condition under which images are resolved : The size of the spot is very small, it plays an important role in determining the limit of resolution.
For the two stars to be Just resolved
f Δ θ ≈ r0 ≈ \(\frac{0.61 \lambda \mathrm{f}}{\mathrm{a}}\)
Δ θ ≈ \(\frac{0.61 \lambda}{\mathrm{a}}\) —– (1)
Thus Δθ will be small, if the diameter (2a) of the objective is large. This implies that the telescope will have better resolving power if a is large.
In case of microscope, the object is placed slightly beyond f. The corresponding minimum seperation (dMin) between the object and the objective lens is given by
dMin = \(\frac{1.22 \lambda}{2 \mu \sin \beta}\)
Where μ = Refractive index
μ sin β = Numerical aperture.

Question 12.
Explain how Corpuscular theory predicts the speed of light in a medium, say, water, to be greater than the speed of light in vacuum. Is the prediction confirmed by experimental determination of the speed of light in water ? If not, which alternative picture of light is consistent with experiment ?
Solution:
In Newton’s corpuscular picture of refraction, particles of light incident from a rarer to a denser medium experience a force of attraction normal to the surface. This results in an increase in the normal component of velocity but the component along the surface remains unchanged. This means
c sin i = v sin r or \(\frac{\mathrm{v}}{\mathrm{c}}=\frac{\sin \mathrm{i}}{\sin \mathrm{r}}\) = μ; Since μ > 1, ∴ v > c
The prediction is opposite to the experimental result: (v < c) . The wave picture of light is consistent with experiment.

Question 13.
You have learnt in the text how Huygens’ principle leads to the laws of reflection and refraction. Use the same principle to deduce directly that a point object placed in front of a plane mirror produces a virtual image whose distance from the mirror is equal to the object distance from the mirror.
Solution:
In figure, P is a point object placed at a distance r from a plane mirror M1 M2. with P as centre and OP = r as radius, draw a spherical arc; AB. This is the spherical wave front from the object, incident on M1 M2. If mirrors were not present, the position of wave front AB would be A’B’ where PP’ = 2r. In the presence of the mirror, wave front AB would appear as A”PB”, according to Huygen’s construction. As is clear from the fig. A’B’ and 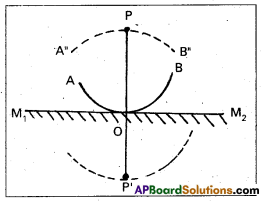 A”B” are two spherical arcs located symmetrically on either side of M1 M2. Therefore, A’PB’ can be treated as reflected image of A”PB”. From simple geometry, we find OP = OP’, which was to be proved.

Question 14.
Let us list some of the factors, which could possibly influence the speed of wave propagation :

Question 15.
For sound waves, the Doppler formula for frequency shift differs slightly between the two situations :

Question 17.
Answer the following questions :
(a) In a single slit diffraction experiment, the width of the slit is made double the original width. How does this affect the size and density of the central diffraction band ?
(b) In what way is diffraction from each slit related to the interference pattern in a double-slit experiment ?
(c) When a tiny circular obstacle is placed in the path of light from a distant source, a bright spot is seen at the centre of the shadow of the obstacle. Explain why ?
(d) Two students are separated by a 7m partition wall in a room 10 m high. If both light and sound waves Can bend around obstacles, how is it that the students are unable to see each other even though they can converse easily.
(e) Ray optics is based on the assumption that light travels in a straight line.fDiffraction effects (observed when light propagates through small apertures/slits or around small obstacles) disprove this assumption. Yet the ray optics assumption is so commonly used in understanding location and several other properties of images in optical instruments. What is the justification ?
Solution:
a) The size of centred diffraction band reduces by half according to the relation : size \(\frac{\lambda}{\mathrm{d}}\). Intensity increase four fold.

b) The intensity of interference fringes in a double slit arrangement is modulated by diffraction pattern Of each slit.

c) Waves diffracted from the edge of the circular obstacle interfer constructively at the centre of the shadow producing a bright spot.

e) Typical sizes of apertures involved in ordinary optical instruments are much larger than the wavelength.

Question 20.
Answer the following questions :
(a) When a low flying aircraft passes overhead, we sometimes notice a slight shaking of the picture on our TV screen. Suggest a possible explanation.
(b) As you have learnt in the text, the principle of linear superposition of wave displacement is basic to understanding intensity distributions in diffraction and interference patterns. What is the justification of this principle ?
Solution:
a) Interference of the direct signal received by the antenna with the (weak) signal reflected by the passing air craft.
b) Super position principle follows from the linear character of the equation governing wave motion. It is true so ions as wave have small amplitude.

Question 21.
In deriving the single slit diffraction pattern, it was stated that the intensity is zero at angles of nλ/a. Justify this by suitable dividing the slit to bring out the cancellation.
Solution:
Divide the signal slit into n smaller slits of width a’ = \(\frac{\mathrm{a}}{\mathrm{n}}\). Each of the smaller slits sends zero intensity in the direction θ. The combination gives zero intensity as well.