Students get through AP Inter 2nd Year Chemistry Important Questions 7th Lesson d and f Block Elements & Coordination Compounds which are most likely to be asked in the exam.

Question 4.
Why Zn2+ is diamagnetic whereas Mn2+ is paramagnetic ?
Answer:

Question 7.
Aqueous Cu2+ ions are blue in colour, where as aqueous Zn2+ ions are colourless. Why ?
Answer:

Question 9.
What is an alloy? Give example.
Answer:
Alloy : An intimate mixture having physical properties similar to that of the metal formed by a metal with other metals or metalloids or sometimes a non metal is called as an alloy.
Eg.: Invar — 64% Fe, 35% Ni, Mn 8cc in traces
Nichrome — 60% Ni,, 25% Fe, 15% Cr.

Question 10.
What is lanthanoid contraction ? (IPE 2016(TS))
Answer:
The slow decrease of atomic and ionic radii in lanthanides with increase in atomic number is called lanthanide contraction.

Question 26.
Why is it difficult to obtain M3+ oxidation state in Ni, Cu and Zn ?
Answer:

Question 28.
Why is Cr2+ reducing and Mn3+ oxidizing even though both have the same d4 electronic configuration ?
Answer:
Cr+2 is reducing as its configuration changes from d4 to d3, the latter having a half filled t2g level. On the other hand the change from Mn+2 to Mn+3 results in the half filled (d5) configuration which has extra stability.

Question 30.
Why do the transition metals readily form alloys?
Answer:
Because of similar atomic or ionic radii and similar characterstic properties of transition elements alloys are readily formed by these elements.

Question 31.
How do the Ionic character and acidic nature vary among the oxides of first transition series?
Answer:

Question 32.
What are the different oxidation s.tates exhibited by the lanthanoids?
Answer:

ii) Similarity in the size of elements of second and third transition series : Because of lanthanoid contraction, elements which follow the third transition series are considerably smaller than would otherwise be expected. The normal size increases from Sc → Y → La and disappears after lanthanides. Thus, pairs of elements such as Zr/Hf, Nb/Ta and Mo/w are almost identical in size.
Due to almost similar size, such pairs have very similar properties which makes their separation difficult.

1) Every complex compound has a central metal atom (or) ion. 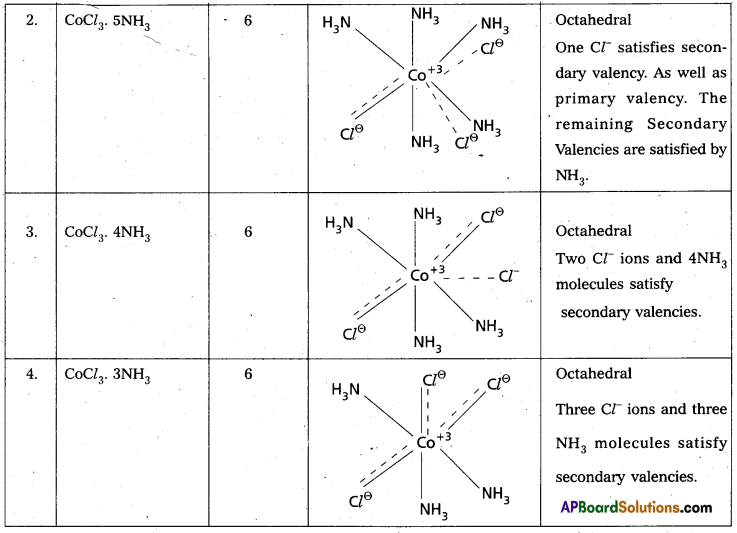 Question 4.
Using IUPAC norms write the formulas for the following.

Question 6.
Give the geometrical shapes of the following complex entities

On the basis of the numberof donor atoms available for coordination, the ligands can be classified as :

a) Unidentate : One donor atom, Eg.

a) Stereoisomerim : Stereoisomerism is a form of isomerism in which two substances have the same composition and structure but differ in the relative spatial positions of the ligands. This can be sub divided into two classes namely.
i) Geometrical isomerism and
ii) optical isomerism

a) (i) Geometrical isomerism :

The two forms are called dextro (d) and laevo (l) depending upon the direction they rotate the plane of polarised light in a polarimeter (d rotates to the right, l to the left). Optical isomerism is common in octahedral complexes involving bidentate ligands.

(ii) Co-ordinate isomerism : This type isomerism arises from the interchange of ligands between cationic and anionic entities of different metal ions present in a complex.
eg. : [CO(NH3)6] [Cr(CN)6] and [Co(CN)6] [Cr(NH3)6]

(iii) Ionisation isomerism: This form of isomerism arises when the counter ion in a complex salt is itself a potential ligand and can displace a ligand which can then become the counter ion.
eg. : [Co(NH3)5SO4] Br and [Co(NH3)5Br]SO4

(iv) Hydrate isomerism : This form of isomerism is known as ‘hydrate isomerism since water is involved as a solvent. Hydrate isomers differ by whether or not a hydrate molecule is directly bonded to the metal ion or merely present as free solvent molecules in the crystal lattice.

Question 12.
What is meant by chelate effect ? Give example.
Answer:
When a didentate or a polydentate ligand contains donor atoms positioned in such a way that when they coordinate with the central metql ion, a 5-or 6-membered ring is formed, the effect is known as chelate effect. Example

Since, all the electrons are paired, the complex is diamagnetic. Moreover (n – 1) d-orbitals are involved in bonding, so, it is an inner orbital or low spin complex.

F- is not a strong field ligand. It is a weak field ligand, so no pairing occurs. Thus, 3d- orbitals are not available to take part in bonding.

Because of the presence of five unpaired electrons, the complex is paramagnetic. Moreover, nd-orbitals are involved in bonding, so it is an outer orbital or high spin complex.

Oxalate ion being a strong field ligand pair up the 3d electrons, thus two out of the five 3d-orbitals are available for oxalate ions.

Since, all the electrons are paired, this complex is diamagnetic. It is an inner orbital complex because of the involvement of (n – 1) d-orbital for bonding,

Because of the presence of four unpaired electrons, the complex is paramagnetic. Since, nd orbitals take part in bonding, it is an outer orbital complex or high spin complex.

When ligands approach a transition metal ion, the d-orbitals split into two sets (t2g and eg), one with lower energy and the other with higher energy. The difference of energy between the two sets of orbitals is called crystal field splitting energy, Δ0 for octahedral field and Δt for tetrahedral field.

Question 15.
Explain the terms
(i) Ligand
(ii) Coordination number
(iii) Coordination entity
(iv) Central metal atom/ion.
Answer:
i) Ligand : The ions or molecules bound to the central atom/ion in the coordination entity are called ligands. These may be
a) simple ions such as Cl–
b) small molecules such as H2O or NH3
c) large molecules such as H2NCH2CH2NH2 or N(CH2CH2NH2)3 or even
d) macro-molecules, speh as proteins.
On the basis of the number of donor atoms available for coordination, the ligands can be classified as :