Students get through AP Inter 2nd Year Chemistry Important Questions Lesson 6(a) Group-15 Elements which are most likely to be asked in the exam.

Question 1.
Nitrogen molecule is highly stable – Why ? (IPE 2014)
Answer:
Nitrogen Molecule is more stable because in between two nitrogen atoms of N2, a triple bond is present. To break this triple bond high energy is required (941.4KJ/mole).

Question 3.
What is allotropy ? Explain the different allotropic forms of phosphorus. (IPE 2016(TS))
Answer:
Allotropy: The existence of an element in different physical forms having similar chemical properties is called allotropy.
→ Allotropes of ‘P’: → White ‘P’ (or) Yellow P. 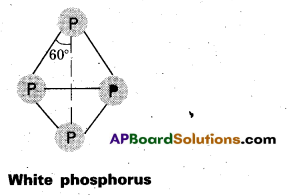 Red ‘P’ is polymeric consisting of chains of P4 tetrahedron linked together through covalent bonds.

Question 7.
Ammonia is a good complexing agent – Explain with an example.
Answer:
NH3 is a lewis base and it donates electron pair to form dative bond with metal ions. This results in the formation of complex compound.
Eg :

Question 14.
Give the uses of
a) nitric acid and
b) ammonia.
Answer:
Nitric acid : It is used in the manufacture of fertilizers, explosives, nitro glycerine, nitro toluence etc.,
Ammonia : It is used to produce fertilizers like urea liquid NH3 is used as a refrigerant.

Question 21.
Why does NH3 act as a Lewis base ?
Answer:
Nitrogen atom in NH3 has one lone pair of electrons with is available for donation. Therefore, it acts as a Lewis base.

Question 24.
Are all the five bonds in PCl5 molecule equivalent ? Justify your answer.
Answer:
PCl5 has a trigonal bipyramidal structure and the three equatorial P-Cl bonds are equivalent. While the two axial bonds are different and longer than equatorial bonds.

Question 26.
Explain the following .
a) reaction of alkali with red phosphorus.
b) reaction between PCl3 and H2O.
Answer:
a) Red phosphorus reacts with alkalies slowly and forms phosphine and hypophosphite.
P4 + 3NaOH + 3 H2O → PH3 + 3 NaH2 PO2
b) PCl3 is hydrolysed by water and gives H3PO3

Question 28.
Illustrate how copper metal can give different products on reaction with HNO3.
Answer:

Question 29.
H3PO2 is a good reducing agent – Explain with an example.
Answer:
In H3PO2, two H-atoms are bonded directly to P-atom which imparts reducing character to the acid.

Question 31.
PH3 has lower boiling point than NH3. Why ?
Answer:
Unlike NH3, PH3 molecules are not associated through inter molecular hydrogen bonding. That is why the boiling point of PH3 is lower than NH3.

Question 1.
How is ammonia manufactured by Haber’s process ? Explain the reactions of ammonia with
a) ZnSO4(aq)
b) CuSO4(aq)
c) AgCl(s) (TS Mar. ’17 IPE 2015(AP))
Answer:
In Haber process ammonia is directly synthesised from elements (nitrogen and hydrogen). The principle involved in this is

This is a reversible exothermic reaction.
According to Le Chatelier’s principle favourable conditions for the better yield of ammonia are low temperature and high pressure. But the optimum conditions are :
Temperature : 720k
Pressure : 200 atmospheres
Catalyst: Finely divided iron in the presence of molybdenum (Promoter).
Procedure : A mixture of nitrogen and hydrogen in the volume ratio 1 : 3 is heated to 725 – 775K at a pressure of 200 atmospheres is passed over hot finely divided iron mixed with small amount of molybdenum as promotor. The gases coming out of the catalyst chamber consists of 10 – 20% ammonia. Gases are cooled and compressed, so that ammonia gas is liquified and the uncondensed gases are sent for recirculation.

The liberated heat keeps the catalyst hot. The ’NO’ is cooled and is mixed with oxygen to give the dioxide, in large empty towers (oxidation chamber). The product is then passed into warm water, under pressure in the presence of excess of air, to give HNO3.
4NO2 + O2 + 2H2O → 4HNO3.
The acid formed is about 61% concentrated.