Pick out the correct answer :

Question 4.
When we increase the loudness of sound of a TV, the property of sound that changes is (AS 1)
A) amplitude
B) frequency
C) wavelength
D) speed
Answer:
A) amplitude

Question 5.
The characteristic of the sound that describes how the brain interprets the frequency of sound is called (AS 1)
A) pitch
B) loudness
C) quality
D) sound
Answer:
A) pitch

Question 7.
Explain the following terms : (AS 1)
a) amplitude
b) wavelength
c) frequency
Answer:
a) Amplitude :
The maximum variation in density or pressure from the mean value is called amplitude.
(or)

The maximum disturbance of particles of a medium from their mean position is called amplitude.

Question 8.
Deduce the relation between wavelength, frequency, and speed of sound. (AS 1)
Answer:
1) Speed of sound can be defined as the distance by which a point on the wave, such as a compression or rarefaction, travels in unit time.

2) Doctors can see the images of patient’s organs like liver, gall bladder, uterus, etc. to know the abnormalities in their functioning, using ultrasounds.

3) Engineers use the reflections of sound in designing concert halls and cinema halls.

4) Generally the ceilings of concert halls, conference halls, cinema halls are designed such that sound after reflection reaches all corners of the hall as shown in the figure.

Question 11.
Which has larger frequency – infrasonic sound or ultrasonic sound? (AS 7, AS 2)
Answer:

Question 12.
The grandparents and parents of two-year-old girl are playing with her in a room. A sound source produces a 28 kHz sound. Who in the room is most likely to hear the sound? (AS 2, AS 7)
Answer:

Question 13.
Does the sound follow same laws of reflection as light does? (AS 1)
Answer:

Question 14.
Why is soft furnishing avoided in concert halls? (AS 7)
Answer:

Question 15.
Two sources A and B vibrate with the same amplitude. They produce sounds of frequencies 1 kHz and 30 kHz respectively. Which of the two waves will have larger power? (AS 1)
Answer:
Frequency of source A = 1 kHz; Frequency of source B = 30 kHz

As the speed of wave increases with frequency and both the waves have same amplitude, the sound produced from source B has larger power.

Question 16.
What do you understand by a sound wave? (AS 1)
Answer:

Question 17.
Define the wavelength of a sound wave. How is it related to the frequency and the wave speed? (AS 1)
Answer:
Wavelength :
The distance between two consecutive compressions or rarefactions is called wavelength.

Question 18.
Explain how echoes are used by bats to judge the distance of an obstacle in front of them. (AS 1)
Answer:

Question 19.
With the help of a diagram describe how compression and rarefaction pulses are produced in air near a source of sound. (AS 5)
Answer: 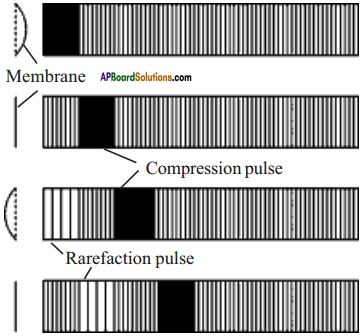 Question 20.
How do echoes in a normal room affect the quality of the sounds that we hear? (AS 7)
Answer:

Question 21.
Explain the working and applications of SONAR. (AS 1)
Answer: 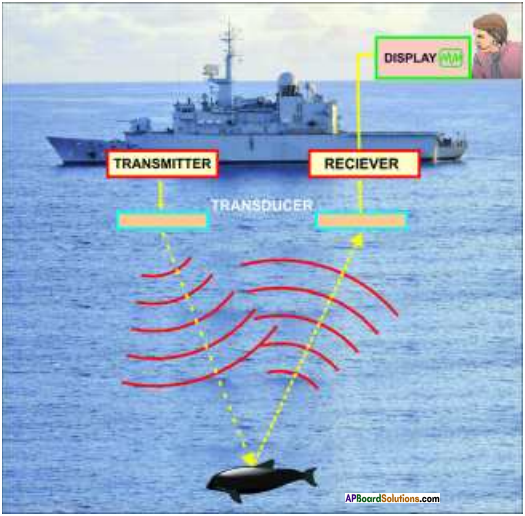 Application:
Marine geologists use this method to determine the depth of the sea and to locate underwater hills and valleys.

∴ Wavelength of the sound wave in air = 17 m

∴ Wavelength of the sound wave in water = 74 m

Question 25.
A man is lying on the floor of a large, empty hemispherical hall, in such a way that his head is at the centre of the hall. He shouts “Hello!” and hears the echo of his voice after 0.2 s. What is the radius of the hall ? (Speed of sound in air 340 m/s) (AS 7)
Answer:
Let the distance travelled by the sound wave = 2d m

Question 26.
“We know that sound is a form of energy. So, the large amount of energy produced due the sound pollution in cosmopolitan cities can be used to our day-to-day needs of energy. It also helps us to protect biodiversity in urban areas”. Do you agree with this statement? Explain.
Answer:

Question 27.
How do you appreciate efforts of a musician to produce melodious sound using a musical instrument by simultaneously controlling frequency and amplitude of the sounds produced by it.
Answer:

Question 28.
You might have observed that sometimes your pet dog starts barking though no one is seen near in its surroundings or no disturbance heard nearby. Does this observation raise any doubts in your mind about the peculiar behaviour of dog after your understanding about ‘range of hearing the sound’. If yes, write them.
Answer:

Question 29.
Find out the names of animals (and their photographs from internet) which communicate using infra-sonic or ultra-sonic sound and prepare a scrap book.
Answer:
Scrap book 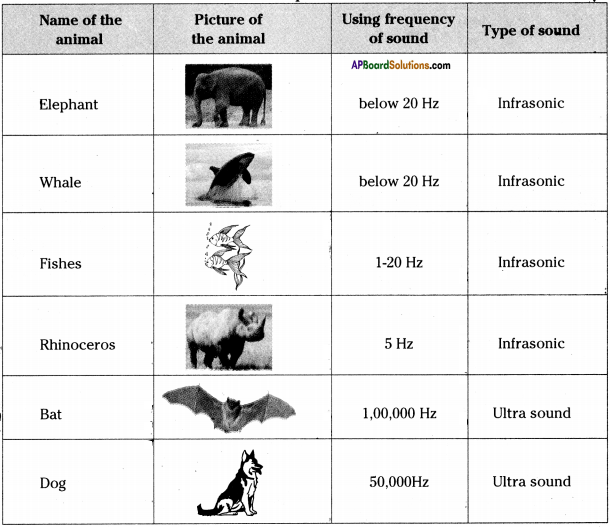 Question 2.
Does it travel by itself or is there any force bringing it to our ears?
Answer:
Sound does not travel by itself. When a sound is produced, the kinetic energy of the source, vibrates the nearest particles in the medium. These particles transfers energy and finally, it reaches our ears.

Question 3.
What is sound? Is it a force or an energy?
Answer:
Sound is a form of energy.

Question 6.
What do you infer from this?
Answer:
Sound is a form of energy which can travel in the form of waves through the medium.

Question 10.
What do you conclude from the above activity?
Answer:
We observe that vibrating tuning fork produces sound.

Question 13.
What part of our body vibrates when we speak?
Answer:
When we speak, vocal cord vibrates in our body.

Question 17.
Are they longitudinal or transverse?
Answer:
Sound waves in air are longitudinal.

Question 19.
What happens if you lift your tube slightly above the table?
Answer:
If we lift the tube slightly we cannot hear the sound clearly.

Question 22.
Do compressions and rarefactions in sound wave travel in same directions or in opposite directions? Explain.
Answer:

Question 23.
Does the frequency of sound waves depend on the medium in which it frawels? How?
Answer:
Yes.

2) As speed of wave differs from medium to fnedium, the frequency also changes, keeping the wavelengths constant.

Quality is the characteristic which enables us to distinguish between musical notes emitted by different musical instruments.

Question 28.
What change, would you expect in the characteristic of a musical sound when we increase its frequency one instance and amplitude in another instance?
Answer:
When frequency is increased, the pitch of sound increases. When amplitude is increased, its loudness increases.

Question 29.
What could be the reason for better reflection of sound by rough surfaces than polished surfaces?
Answer:

Question 30.
Why is an echo weaker than the original sound?
Answer:

Question 31.
In a closed box if you say hello, the sound heard will be Hellooooo ………. What does it mean?
Answer:
In a closed box, the multiple reflections of sound has no way to go out side. Hence we will hear the sound as hellooooooo ………

Question 33.
Why do we put cushions on the chairs, carpet on the floor, straw materials on the walls in cinema halls?
Answer:

Question 34.
What is the benefit of using ultrasound over light waves in the above applications?
Answer:

Question 1.
How can .you say that the sound is a form of energy?
Answer:

Question 2.
Prove that the sound is produced from a vibrating source.
Answer: 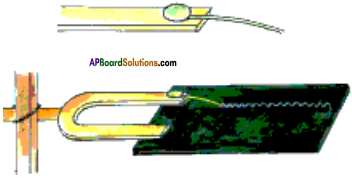 Question 3.
а) How do you demonstrate the formation of compressions and rarefactions in a slinky?
Answer:

b) Mow do you demonstrate the formation of crests and troughs in a slinky?
Answer: 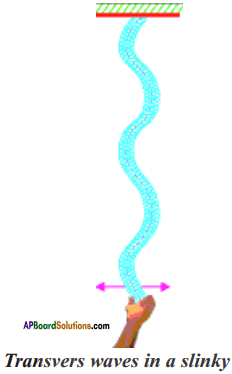 Question 4.
Describe an activity to listen the reflected sound.
Answer: 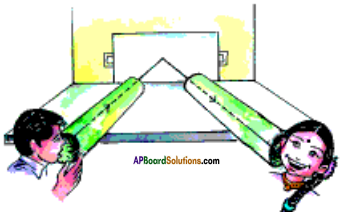