Students can go through AP Board 9th Class Maths Notes Chapter 4 Lines and Angles to understand and remember the concepts easily.

→ A ray is a part of line. It begins at a point and goes on endlessly in a specified direction.

→ A part of a line with two end points is called a line segment.

→ Points on the same line are called collinear points.

→ The angle is formed by rotating a ray from an initial position to a terminal position.

→ One complete rotation makes an angle 360°.

→ If two lines have no common points, they are called parallel lines. In the figure l // m.

→ If two lines have a common point then they are called intersecting lines.

→ Three or more lines meet at a point are called concurrent lines. 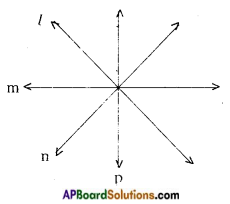 → Two angles are said to be complementary if their sum is 90°.

→ Two angles are said to be form a pair of adjacent angles if they have a common arm and lie on the either sides of the common arm. 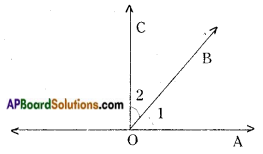 ∠1 and ∠2 are a pair of adjacent angles with OB as their common arm.

→ When two lines intersect, the pairs of vertically opposite angles thus formed are equal a = c and b = d. (from the figure)

→ When a pair of lines intersected by a transversal, there forms eight angles. 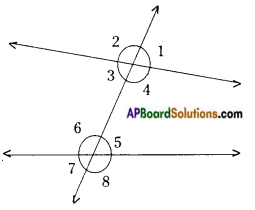 → If one side of a triangle is produced, then the exterior angle thus formed is equal to the sum of the two interior opposite angles.