Question 1.
Draw a labelled diagram of the T.S of the flagellum.
Answer: 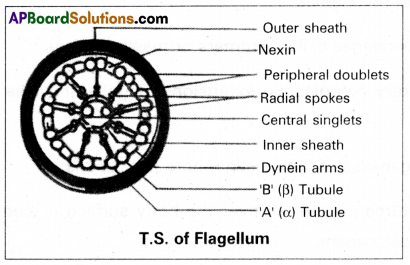 Question 2.
List any two differences between a flagellum and a cilium.
Answer:

Question 3.
What are dynein arms? What is their significance?
Answer:
‘A’ tube of each peripheral doublet bears paired arms along its length called dynein arms made up of protein dynein.
The dynein arms of the ‘A’ tubule face the tubule ‘B’ of the adjacent doublet.

Question 4.
What is a kinety?
Answer:
In the ciliate protozoans, a longitudinal row of kinetosomes together with kinetodesmata constitute a unit called kinety.

Question 6.
Why do we refer to the offspring, formed by the asexual method of reproduction, as a clone?
Answer:
As a result of the asexual method, the offsprings are, not only identical to one another but also exact copies of their parent. The term ‘clone’ is used to describe such morphologically and genetically similar individuals.

Question 7.
Distinguish between proter and opisthe.
Answer:
During transverse binary fission in Paramecium two daughters, individuals are formed. The anterior one is called proter and the posterior is called opisthe.

Question 10.
Define conjugation with reference to ciliates. Give two examples.
Answer:
Conjugation is a temporary union between two senile ciliates that belong to two different ‘mating types’ for the exchange of nuclear material and its reorganization. – Wichterman.
Ex: Paramecium and Vorticella.

All the kineties together form an infraciliary system, which is connected to a ‘motorium’, located near the cytopharynx. The infraciliary system and motorium form the ‘neuromotor system’ that controls and coordinates the movement of cilia.

Question 2.
Write the mechanism of bending the flagellum and explain effectively recovery strokes.
Answer:
The bending movement of a flagellum is brought about by the sliding of microtubules past each other due to the functioning of ‘dynein arms’ utilizing ATP. A flagellum pushes the fluid medium at right angles to the surface of its attachment, by its bending movement. 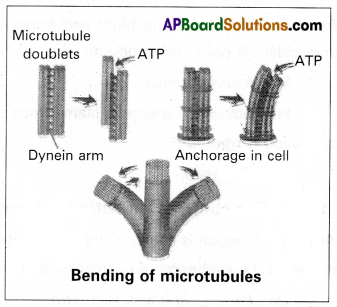 Bending movement of flagella and cilia: Dynein arms show a complex cycle of movements using energy provided by ATP (dynein arms are the sites of ATPase activity in the cilia and flagella). The dynein arms of each doublet attach to an adjacent doublet and pull the neighbouring doublet. So the doublets slide past each other in opposite directions. The arms release and reattach a little further on the adjacent doublet and again ‘puli’. As the doublets of a flagellum or cilium are physically held in place by the radial spokes, the doublets cannot slide past much. Instead, they curve and cause the bending of flagellum or cilium. Such bending movements of flagella and cilia play an important role in flagellar and ciliary locomotion.

The flagellar movement of many organisms is a sidewise-lash which consists of two strokes namely the effective or propulsive stroke and the recovery stroke. 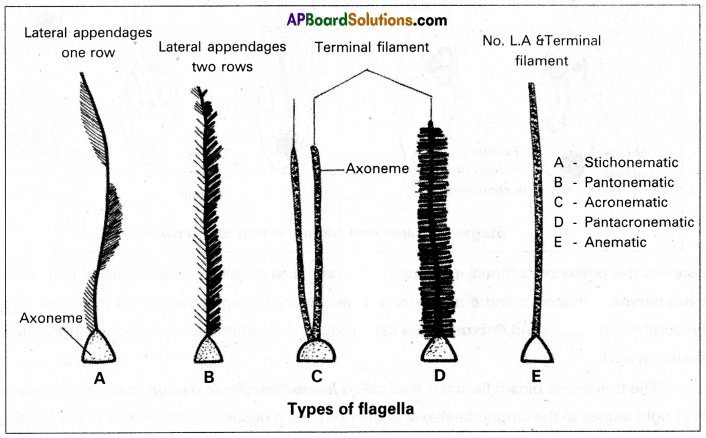 (d) Pantacronematic: This type of flagellum is provided with two or more rows of lateral appendages and the axoneme ends in a terminal naked filament.
E.g. Urceolus.
(e) Anematic or simple: In this type of flagellum, lateral appendages and terminal filament are absent. Hence, it is called anematic (a-no; nematic-threads)
E.g. Chilomonas and Gryptomonas.

At first, the micronucleus divides by mitosis and the macronucleus divides into two daughter nuclei by amitosis. The oral groove disappears. After karyokinesis, a transverse constriction appears in the middle of the body, which deepens and divides the parent cell into two daughter individuals, the anterior proper and the posterior opisthe. The proper receives the anterior contractile vacuole, cytopharynx, and cytosome from its parent individual. It develops a posterior contractile vacuole and a new oral groove.

The opisthe receives the posterior contractile vacuole of its parent. It develops a new anterior contractile vacuole, cytopharynx, cytostome and a new oral groove. Binary fission is completed in almost two hours, in favourable conditions and Paramecium can produce four generations of daughter individuals by binary fission in a day. The transverse binary fission is also called homothetogenic fission because the plane of fission is at right angles to the longitudinal axis of the body. As it occurs at right angles to the kineties, it is also called perkinetal fission. 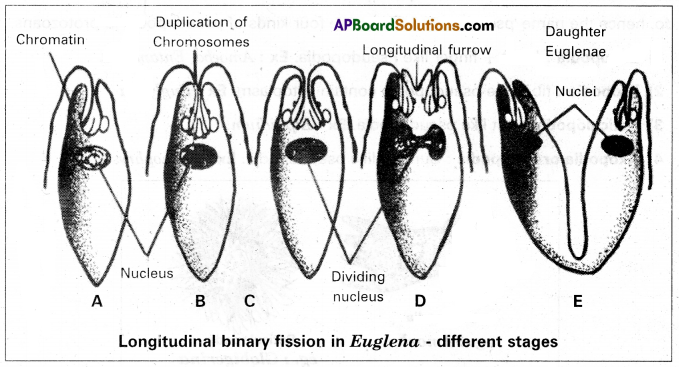 During the process of binary fission, the nucleus, basal granules, chromatophores, and cytoplasm undergo division. The nucleus divides by mitosis into two daughter nuclei. Then the kinetosomes and the chromatophores also divide. At first, a longitudinal groove develops in the middle of the anterior end. This groove extends gradually towards the posterior end until the two daughter individuals are separated. One daughter Euglena retains the parental flagella. The other daughter individual develops new flagella from the newly formed basal granules. The stigma, paraflagellar body, and contractile vacuole of the parent disappear. They develop afresh in both the daughter Euglenae. The longitudinal binary fission is known as symmetrogenic division because the two daughters Euglenae resemble each other like mirror images.

Question 6.
Write a short note on multiple fission.
Answer:
Multiple fission: It is the division Of the parent body into many smaller individuals (Multi-many; Fission- splitting). Normally multiple fission occurs during unfavourable conditions. During multiple fission, the nucleus first undergoes repeated mitotic divisions without cytokinesis. This causes the formation of many daughter nuclei. Then the cytoplasm also divides into as many bits as there are nuclei. Each cytoplasmic bit encircles one daughter nucleus. This results in the formation of many smaller individuals from a single-parent organism. There are different types of multiple fissions in protozoans such as Schizogony, malegametogony, sporogony in plasmodium, sporulation in Amoeba, etc. 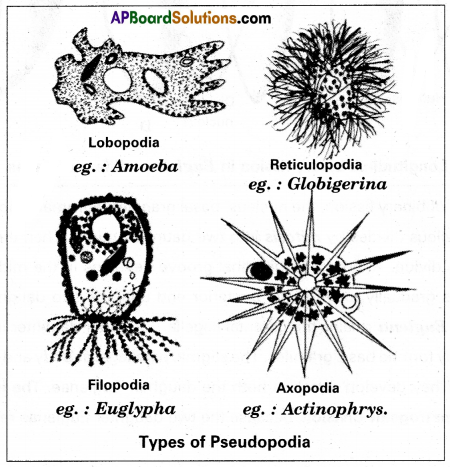 Question 8.
Give an account of the ultrastructure of an axoneme.
Answer:
Ultrastructure of flagellum: The axial filament or axoneme shows 9+2 organisation under the electron microscope. Two central singlets are enclosed by a fibrous inner sheath. Nine peripheral doublets form a cylinder between the inner sheath and the outer sheath. The “A” microtubule of each doublet is connected to the inner sheath by radial spokes. It also has pairs of arms all along the length and is directed towards the neighbouring doublet.

These arms are made of a protein called dynein. These arms create the sliding force. The peripheral doublets are surrounded by an outer membranous sheath called a protoplasmic sheath, which is the extension of the plasma membrane. Some flagella bear lateral appendages called flimmers or mastigonemes along the length of the axoneme above the level of the pellicle. Each flagellum arises from a basal granule that lies below the cell surface in the ectoplasm. 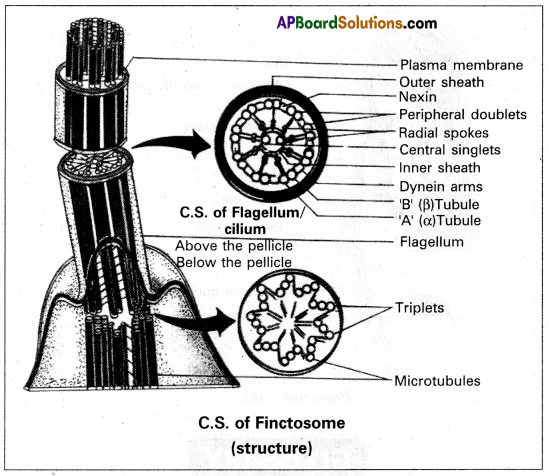 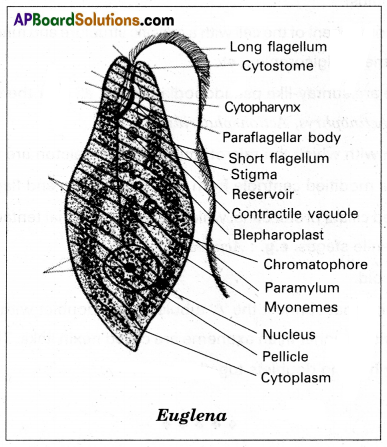 Question 10.
Draw a neat diagram of paramecium and label its important structures/components.
Answer: 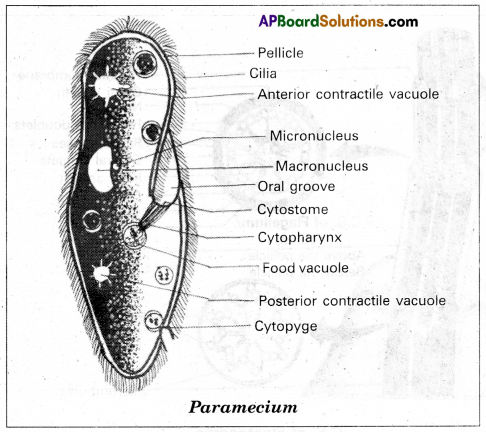