Look at the pictures given and answer the questions that follow.

Question 1.
What do you see in these pictures? Where do you find them?
Answer:
In the first picture we see Kondapalli Bommalu. In the second picture we see the Rudrakshamalas (Chains of beads). In the third picture we see the statues of Vinayaka made with plaster of paris. We generally find these three kinds of handicrafts in stalls, shops, emporiums, exhibitions, etc. In the fourth picture we see Mayuri (Sudha Chandran), a famous Bharatanatyam dancer.

Question 1.
What is the main theme of the story?
Answer:
The main theme of the story is making the children know the richness of our cultural heritage. The story of Ikat’ presents the present condition of textiles in Andhra Pradesh, the meaning of Ikat, the great skill of weavers behind weaving Ikat, the holiness of tying the knot and our traditions. It sends us a message that we should promote handicrafts and protect artists.

Question 2.
How is chitiki rumal used by different people?
Answer:
‘Chitiki Rumal’ is the favourite headgear of fishermen and other labourers. It is also used by Gujarat traders as the towel on their shoulders.

Question 4.
Children’s attention was divided between her words and thefabrics as she opened silk patola sari. Why?
Answer:
The teacher used the words such as Chitiki, Patola and Ikat to explain the handloom. Saying these words, she opened a silk patola sari from Patan, Gujarat. It had a red design on a black background with rows of flowers in the border. The simple leaf design repeated across the body and the flowers in the border created a mesmorising effect. So, their attention was divided between her words and fabrics.

Question 5.
The writer described some designs, historical things and the weaving. Which part of the story do you like most?
Answer:
I like the process of weaving the most as it is a complex process. Counting the threads, measuring the distance, calculating when to repeat a pattern and tying the knot seem that it is a complex process.

I. Read the following sentences.
V.V.S. Lakshman is a top class batsman.
Sruthi is in class VIII.
We have ten minutes left for the show.
The minutes of every official meeting remain an important document.
The words underlined in the above sentences have the same spelling but they differ in meaning. These words are called Homonyms.

Find the meaning of the following homonyms with the help of a dictionary.

II. Use the above homonyms In your own sentences.
Answer:
1. a) He is very fair always.
b) This evening we are going to the fair.
(or)
This evening we will go to the fair.
2. a) She is in a disturbed state of mind,
b) I hope you don’t mind if I leave now.
3. a) All the class is very quiet.
b) He always loves the quiet of his own room.

I. Read the following pair of sentences taken from the narrative “The Story of Ikat”.
1. Ramya asked, “Are these fabrics from Indonesia?”
2. The teacher said, “What can be the origin of the word?”
a. Who are the speakers?
b. What are the exact words spoken by them?
c. If you want to report the above sentences, how will you do?
Let’s analyse the sentences 1 and 2.
The first part of the sentence ‘Ramya aksed’ has a subject ‘Ramya’ and a verb ‘asked’.
This clause is called the reporting clause. The verb is called reporting verb.
The part within the quotation marks is called reported clause, which gives the exact words spoken by the speaker.
Let’s look at the answer to the question ‘c’.
1. Ramya asked if/whether those fabrics were from Indonesia.
2. The teacher asked what the origin of the word could be.
Let’s look at the changes that have taken place.
You will find the following changes.
a. Change of the pronoun (these – those)
b. Change of the verb in the reported clause (are – were)
c. Change of question to a statement by adding if/whether
All the above changes are made when the reporting verb is in Past tense.
1. Report the following conversation.
Ramya visits a weaver at Pochampally. She asks him a few questions.
Ramya : Uncle, What are you doing?
Weaver: I’m making a sari. Do you like it?
Ramya : Oh! Yes. What is the price?
Weaver : Five hundred rupees. Do you want to buy it?
Ramya : Oh! Yes. Can you pack it for me?
Weaver : Sure, here you are.
Answer:
Ramya asked the weaver what he was doing. He replied that he was making a sari. He asked her if she liked it/that. Ramya replied affirmatively and asked him what the price was. He replied that it was five hundred rupees and asked her if she wanted to buy it/that. Ramya replied affirmatively and asked him if he could pack it/that for her. He replied that he could certainly give it and then offered her the sari she wanted.

Look at the following changes while reporting. 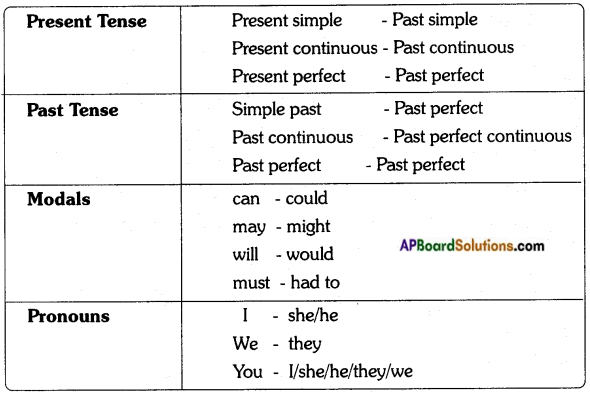 WASH AWAY THE GERMS
Washing hands helps prevent the spread of germs, and should be done frequently.

The Story of Ikat Summary in English

Janaki was a Social Studies teacher. That day she came a bit late to the class. She brought the brilliant red and black checked rumals, shawls with black and blue geometric patterns with her. That material made the dull class vibrant. She wrote on the blackboard ‘Textiles of India – “Ikat” of Andhra Pradesh and pronounced the word “Ikat”. “Ikat” means “to bind” or “knot”. Then she elicited the name of Nalgonda district from the students. She made them know the name ‘Pochampally’, a village in Nalgonda district in connection with “Ikat”. Every student immediatley connected to the village. A handloom is a hand operated loom which weaves. It has been weaving fabrics for centuries. Now we have forgotten our heritage in race with the machine. After telling this, Janaki began to tell the story of Ikat. It is called ‘Chitiki’ in Telugu, ‘Patola’ in Gujarati and simply ‘Ikat’ in Oriya. She showed them a silk patola sari from Patan, Gujarat which created a mesmerising effect. Then she asked them if they were thinking about ‘Ikat’ or ‘tie and dye’. When no one could answer her, she told them about ‘warp’ and ‘weft’. The threads stretched lengthwise are called ‘warp’ and the threads intersecting them widthwise are called ‘weft’. In ‘Ikat’ the threads are carefully sorted, warp and weft divided into bundles, then tied with the materials like plastic sheets, rubber strips and then dropped into colours. The weavers count the threads, measure the distance, calculate when to repeat a pattern and then tie the knots. They draw patterns on the graphs and copy them on the threads. ‘Chitiki rumal’ was the favourite headgear of fishermen and other labourers. Gujarat traders put them on their shoulders as the towels. In Telugu ‘Chitikedu’ means a small quantity of material. Then the students came to know about the original explanation of Ikat. They understood that the characteristic of Ikat was small and small dots of colour. Once Chitiki fabric was our favourite export item. There are different stories about its origin. Different regions fight about its origin but there is no systematic documentation to resolve this dispute. Tying the knot is sacred in our tradition. Muslim culture influenced the designs in Ikat in parts of Gujarat, Maharashtra and Deccan.

The Story of Ikat Glossary

expectantly (adv): hopefuL of something

intersect (v): crossing each other at a point

headgear (n): a piece of cloth worm on head

partial (adj): showing or feeling too much support for one person, team, idea, etc.

criss-cross (v): to make a pattern on something with many straight lines that cross each other

motif (n): a design or a pattern used as a decoration

origin (n): the point from which something starts