Students get through AP Inter 2nd Year Chemistry Important Questions Lesson 12(b) Aldehydes, Ketones, and Carboxylic Acids which are most likely to be asked in the exam.

Question 1.
Although phenoxide ion has more number of resonating structures than carboxylate ion carboxylic acid is a stronger acid than phenol. Why?
Answer:

Question 6.
Write the mechanism of esterification.
Answer:
Mechanism of esterification of carboxylic acids : The esterification of carboxylic acids with alcohols is a kind of nucleophilic acyl substitution. Protonation of the carbonyl oxygen activates the carbonyl group towards nucleophilic addition of the alcohol. Proton transfer in the tetrahedral intermediate converts the hydroxyl group into – +OH2 group, which, being a better leaving group, is. eliminated as neutral water molecule. The protonated ester so formed finally loses a proton to give the ester. 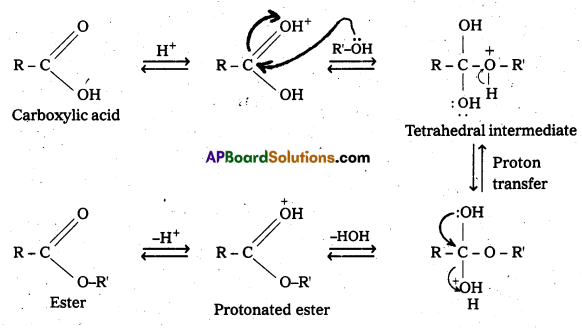 Question 7.
What is Etard reaction. Give equation.
Answer:
Etard Reaction : Benzaldehyde is prepared by the oxidation of Toluene with chromyl chloride.

Question 8.
What is Gater man – Koch formylation reaction. Give equation.
Answer:
Gates man – Koch reaction:
Benzene or its derivatives treated with CO and HCl in presence of AlCl3 gives Benzaldehyde.

Question 10.
What is decarboxylation ? Give equation.
Answer:
Decarboxylation: Carboxylic acids lose carbon dioxide molecule to produce hydrocarbons on heating their sodium salts with soda lime (a mixutre of NaOH & CaO In ratio 3: 1).

Ketones can also be used as one component in the cross aldol reactions.

Nucleophile attack on the electrophilic carbon atom of the polar carbonyl group to form an intermediate this intermediate capture a proton to give the product. Aldehydes are more reactive towards the nucleophilic addition reaction due to steric and electronic reasons. In ketones two large substituents sterically hinder the approach of nucleophile towards carbonyl carbon. Aldehydes having only one alkyl group the attack of nucleophile is easy. Electronically two alkyl groups in ketones reduce the positive charge density on carbonyl carbon by + I effect, than aldehydes having only one alkyl group.

Question 4.
Explain the role of electron withdrawing and electron releasing groups on the acidity of carboxylic acids.
Answer:

Nitriles are selectively reduced by di-isobutyl aluminium hydride (DIBAL – H) to imines which hydrolysis give aldehydes.

Question 6.
Write any two methods for the preparation of Ketones.
Answer: 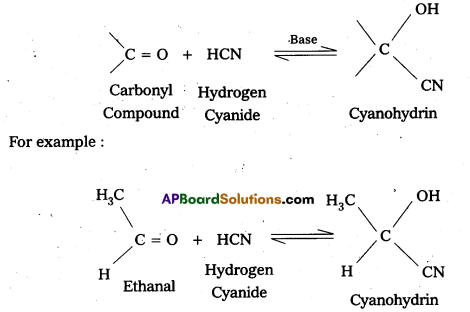 iv) Aldol
When an aldehyde ((or) ketone) having atleast one α-hydrogen atom undergo a reaction in the presence of dilute alkali as catalyst to form aldol (or) β – hydroxy aldehydes ((or) ketals in case of ketones), the reaction is called aldol condensation.
For example:

v) Hemlacetal: In the presence of dry HCl gas an aldehyde reacts with one molecule of a monohydric alcohol forms gem-alkoxy alcohols. These are known as hemiacetals.
For example:

vi) Oxime : In weak acidic medium, an aldehyde ketone reacts with hydroxylamine forms products which are known as oxims.

ii) Wolf Kishner reduction : In this reaction also aldehydes and ketones are reducted to alkanes. Addition of hydrazine followed by heating in the presence of KOH in glycol gives alkanes.

Question 9.
What is haloform reaction? Give équation.
Answer:
Haloform reaction: (Oxidation of methyl ketones)
Aldehydes and ketones having at least one (CH3CO) group react with halogens in presence of NaOH or sodium hypohalite to form haloform (CHX3) and salt of carboxylic acids having one carbon atom less than that of carbonyl compound.

Question 10.
What is Cannizaro reaction? Give equation. (IPE – 2015 (AP), B.M.P)
Answer:
Cannizaro reaction : Aldehydes having no α – hydrogen undergo self oxidation and self reduction reaction on heating with alkali. In this reaction alcohol and salt of carboxylic acid are formed.

Question 11.
What is HVZ reaction? Give equation. (T.S. Mar.’18) (IPE 2016 (TS))
Answer:
Carboxylic acids having α-hydrogens are halogenated at the α-position on treatment with chlorine or bromine in presence of small amount of red phosphorus to give α-halo carboxylic acids.
This reaction is named as Hell-Volhard — Zelinsky (HVZ) reactions.

ii) From Alkyl benzenes : Aromatic carboxylic acids are prepared by the oxidation of alkyl benzenes with KMnO4 or CrO3, any alkyl group irrespective of chain length is oxidised to -COOH. 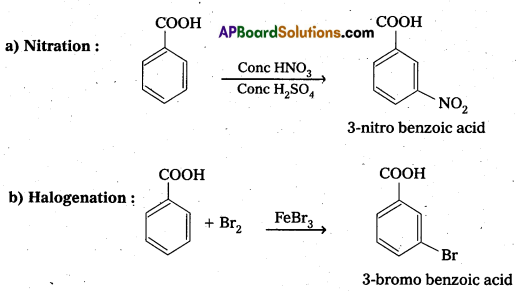 ii) Acetic anhydride : Carboxylic acids on heating in the presence of dehydrating agents like conc H2SO4, P2O5 give anhydride.