Question
Cut out a parallelogram from a sheet of paper again and cut along one of its diagonal. What kind of shapes you obtain ? What can you say about these triangles 7 [Page No. 179]
Solution:
We get two triangles.

The two triangles are congruent to each other.

Question 1.
Show that the diagonals of a square are equal and right bisectors of each other. (Page No. 185)
Solution:

Question 2.
Show that the diagonals of a rhombus divide it into four congruent triangles. (Page No. 185)
Solution: 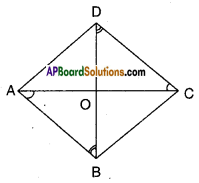 As these are corresponding angles made by the transversal AB with lines EF and BC, we say EF//BC.
Repeat this activity with some more triangles. (Page No. 188)