Question 2.
Based on the following table answer the questions below.

(a) Identify roughly how many centuries it took for the world population to double for the first time.
Answer:
300 years.

(b) In earlier classes you had studied about colonisation. Look at the table and identify in which of the continents the population decreased by 1800.
Answer: Oceania.

(c) Which continent has been most populous for most period of time?
Answer:
Asia.

(d) Is there any continent that is projected to show a significant decrease in population in future?
Answer:
Europe.

Question 3.
List out the impacts on society if sex ratio is too low or too high.
Answer:

The variations of sex ratio shows serious impact on society.
If the sex ratio is high: (i.e., more women than men)

Question 4.
Compare the Indian literacy rates with other countries:

What similarities and differences do you note?
Answer:

Question 7.
Compare the population pyramid of India with the data of three other countries given here. 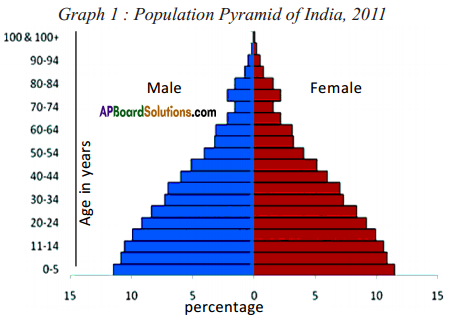 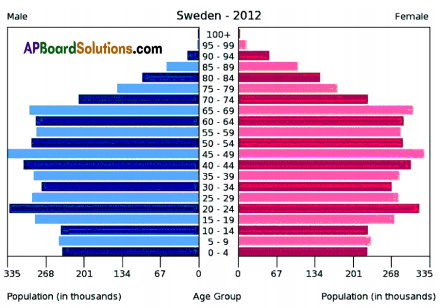 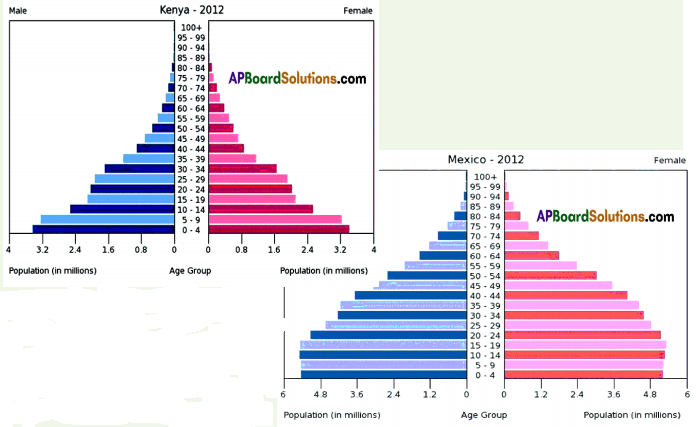 Question 8.
Map work:
a. On a blank map of India showing state boundaries, plot the state-wise population density based on the 2011 census by taking five ranges.
Answer: 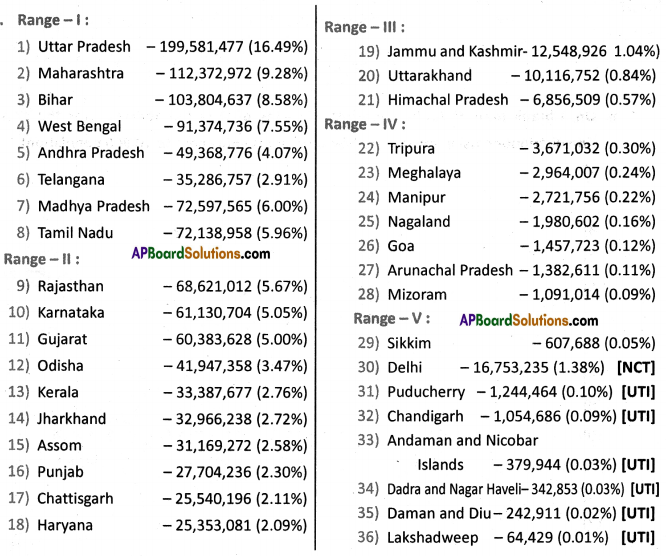 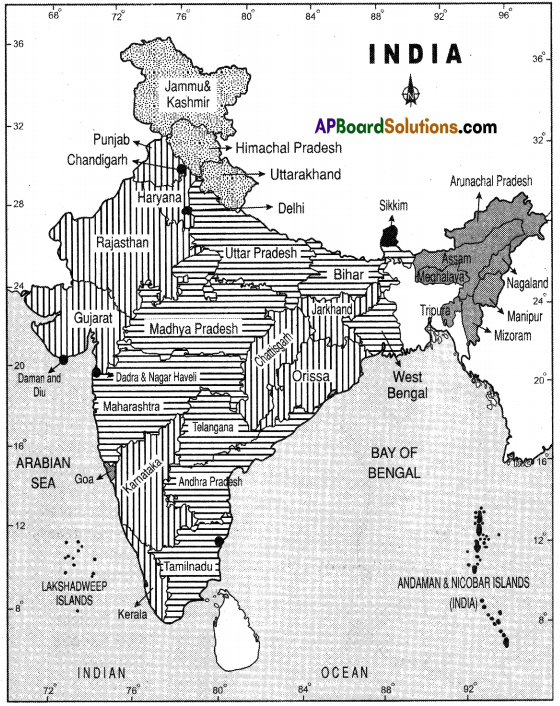 b. On a blank map of Andhra Pradesh showing district boundaries, plot the popula¬tion distribution using the dot method (one dot is equivalent to 10,000 population).
Answer: 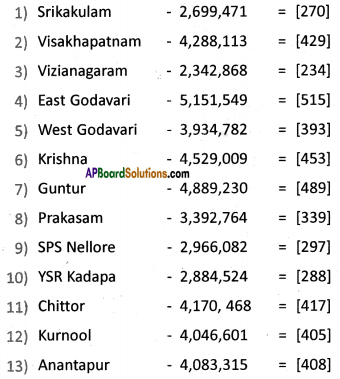 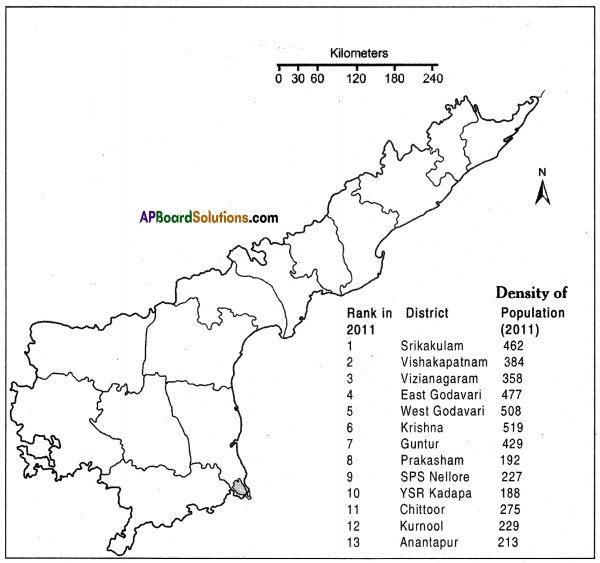 Note: Students are advised to do the map work using the dot method. The number of dots is mentioned in the brackets.

Question 1.
1. Talk to a few people in your neighborhood who have different occupations and incomes. Find out about their views on the ideal family size.
Answer:
I have opted for the following persons in our neighborhood.

Question 2.
Have you ever wondered how information about the people living in your locality or village, and the country as a whole is collected and recorded? Ask your teacher to explain their experiences of collecting census data.
Answer:
To collect census information, areas of the country are divided into enumeration districts. A census interviewer is assigned to each individual district. The interviewer is trained to fully understand each and every aspect of the census information needed. During the month before the census, the interviewer begins preliminary enumerations. The interviewer will visit each building in his or her assigned district and quickly and accurately complete the census questionnaires. Once the questionnaires have been completed, they are taken to a main census office to be checked and coded. The census information is then ready to be input into computers that can generate the required statistics.

Question 3.
What is the difference in collecting information using a census or a sample method? Discuss with few examples.
Answer:
Census and sampling both serve the purpose of providing data and information about a population.
Sample method: Under this technique, some representative units or informants are selected from the universe. These selected units are called samples. Based on the data collected from these samples, conclusions are drawn upon the whole universe.
It is to be noted that if the size of the sample is considerably large and the samples have been properly selected, various results obtained from the study of the sample units, also hold good for the entire universe.
Census method: Under this technique, each and every item or unit constituting the universe is selected for data collection.
In the Indian Census, which is conducted once in ten years, this technique is invariably followed.

The class needs to discuss and arrive at a common meaning for all the terms used in the survey form. Otherwise, there will be confusion in the actual survey and we would not be able to com¬pare the result of one group with another. With the help of your teacher discuss the following: 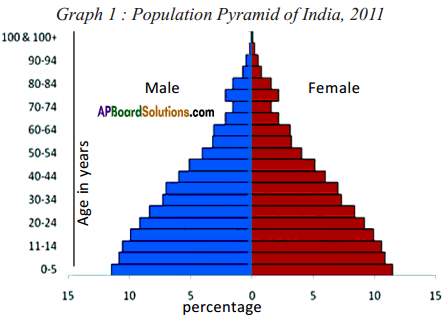 (b) Based on your survey present the following items in a table: Population, Children, Working, Aged.
Answer:
Self Activity.

Question 10.
Find out if there are illiterate people in your village or town. What does your survey reveal?
Answer:
There are 10 to 15 illiterates in our village. They are all over 70 years.
Our survey reveals that they remained illiterate due to their family background and lack of knowledge.

Question 11.
Discuss: How does literacy impact development?
Answer:
Conclusion:
Low literacy rates reduce development in a country because people who are educated are more able to become doctors and lawyers and set up businesses.
e.g.: If a country has a lower literacy rate then it will have a negative impact on the country’s economy due to less people having well-paid jobs, reducing its overall development for that period of time.

Question 12.
How is an agriculture laborer different from a cultivator?
Answer:

Question 13.
Compare the type of workers that you find in your survey with that of the Census?
Answer:
Total workers: 84
Cultivators – 4%
Agricultural laborers – 10%
Workers in household industries – 15%
Others – 71%
This shows development in economy.

Question 14.
Observe the increment in the population of India and its growth 1901-2011. 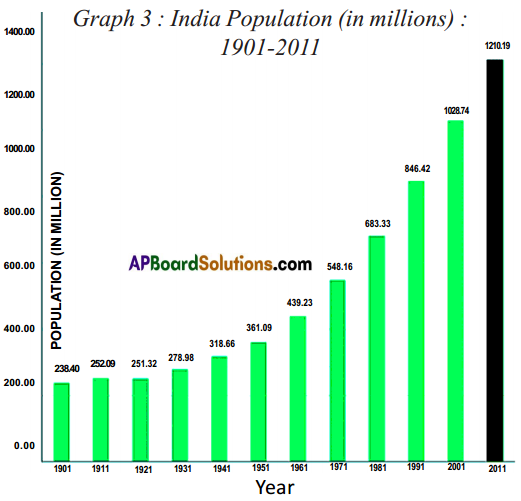 Question 15.
Here are two posters from other countries. Can you guess the message given in them? Have you seen similar posters in India? Discuss. 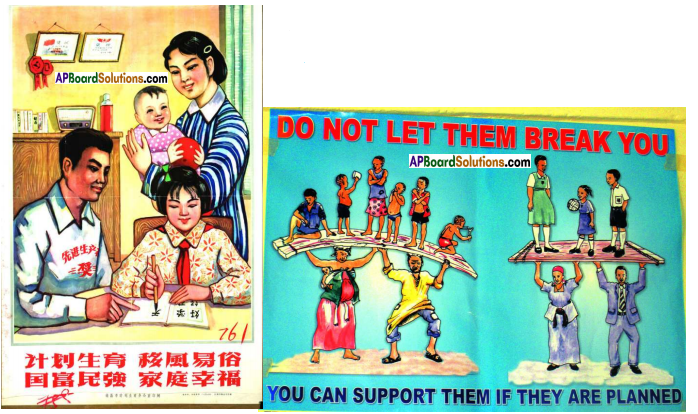 Conclusion:
Yes, I have seen similar posters in India also.
“We two, ours two”

Question 16.
The Magnitude and Rate of India’s Population Growth (calculate the missing figures and write them down)

Question 18.
Talk to some couples who are recently married but do not have children. How many children do they plan for? What are the reasons?
Answer:

Question 19.
In your family trace the number of children for every woman in three generations. What changes do you observe ?
Answer: 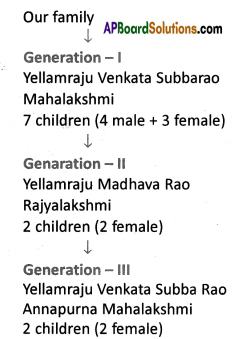 I observe that family planning was planned in the second generation itself. So the growth rate is decreasing at present.

Question 25.
Look at the following map. Find out if there is any relationship between re¬lief features of India and population density. Identify major urban centers across the country. How do you ex¬plain the high population density in the cities? 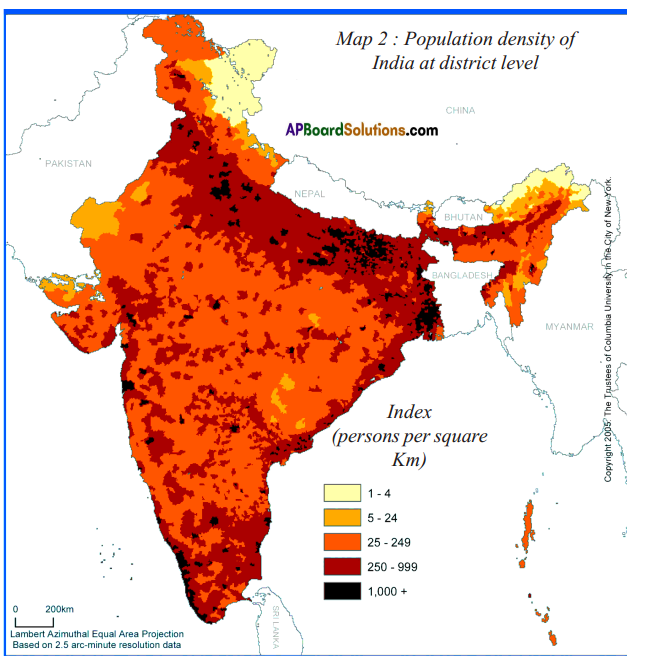 Answer:
Yes, there is a relationship between the relief features of India and population density. The population density is high in the coastal plains and the Ganga Sutlej plain. And it is also high on the river banks also. It is less in mountain¬ous regions and in desert areas. 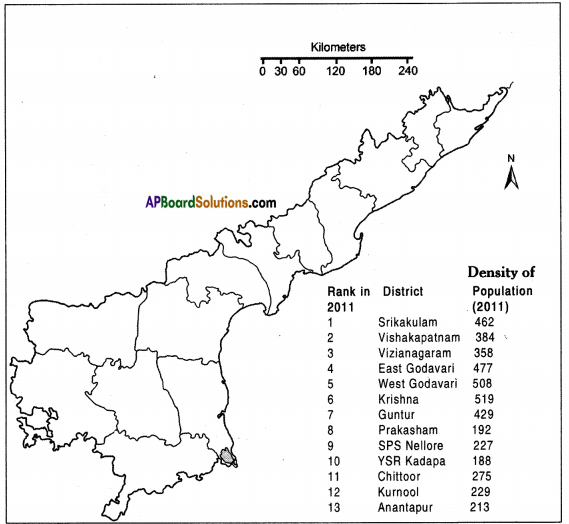 Here are the data for the population density of Andhra Pradesh – 2011. On the above blank district map of AP plot them in ranges.
Compare a high-density district and a low-density district on the following. 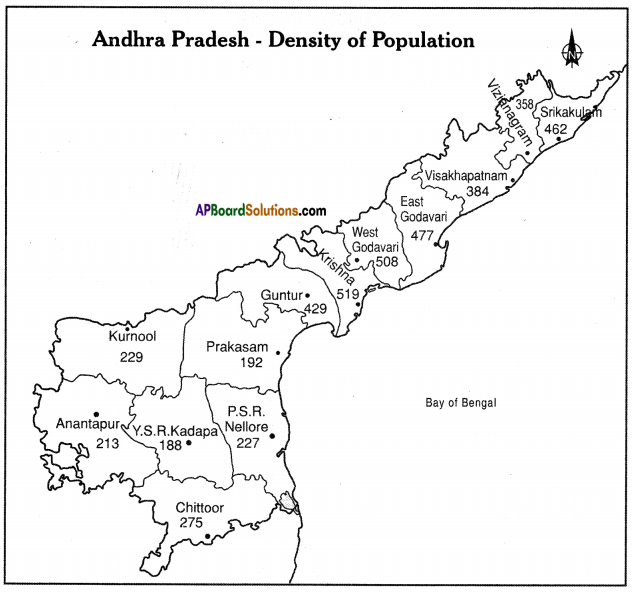 Look at the following two maps of density and the graphs on growth of population. Use various aspects of the population you studied in this chapter and describe them. 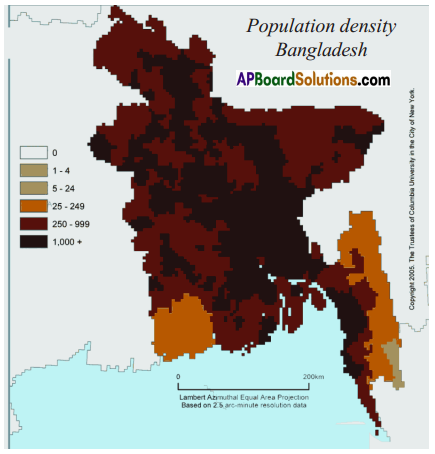 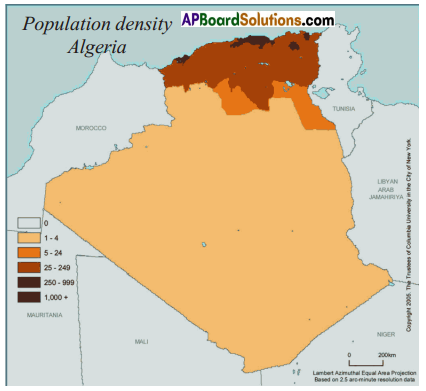