Question 1.
Russian revolution brought in many changes in their society. What were they? And what challenges did they face?
Answer:

Challenges faced by them :

Question 2.
Compare different points of view about Great Depression, which one would you agree with? Why?
Answer:

Question 3.
In what ways were Jews persecuted during the Nazi Germany? Do you think in every country some people are differentiated because of their identity?
Answer:

Question 4.
List the measures taken under idea of welfare state under Great Depression and explain how similar or different they are from that of the reforms that emerged under the USSR?
Answer:

Question 5.
What challenges were faced by Germany during Great Depression and how did Nazi rulers and Hitler make use of it?
Answer:

Question 6.
What were the political changes brought under the Nazi rule? Often people argue that a single powerful leader can resolve the problems of a country. Based on the experiences narrated in the context of Nazi Germany how do you respond to this vision ?
(OR)
What were the policies implemented by the Nazis in Germany before the World War II?
Answer:

Question 1.
Read the two views on the revolution in the countryside(The October Revolution and the Russian Countryside: Two Views). Imagine yourself to be a witness to the events. Write a short account from the standpoint of:

Answer:
1) Standpoint of an owner of estate:

2) Standpoint of a small peasant:
‘Long live revolution’. The time has come for the landless to own some land. There would be no landowner to press for heavy rents. No Feudal lord, now able to force to work under him.

3) Standpoint of a journalist:
What once all believed to be a miracle, now came into reality.
Peasant with a smile on his lips, anticipating what is in stores for him.

Question 2.
Make a brief assessment of the Soviet experiment. How far was it successful in building a world based on equality, freedom and prosperity?
Answer:

Question 3.
Do you think it is justified to execute thousands of people for the sake of such experiments?
Answer:

Question 4.
What were the criticisms raised against communist system?
Answer:

Question 5.
imagine yourself to be a worker who lost job suddenly and has no employment for the next few years. Write an account of a day in your life in first person.
Answer:

Question 6.
Imagine yourself to be a farmer who finds that the price of his crop has fallen to less than half.
Write your reaction in three hundred words.
Answer:
As everyone made more profits in the crop of tomato last year, I decided to go ahead with it. But now I am repenting a lot. Before a month it was sold at Rs. 40 per kg and I believed that this rate may prevail. But due to the influx of tomato from the borders of Karnataka, now the rates were less than 10 Rs. per kg. This volatile change the price of a crop is a matter of discontentment. There were demands everseen for fair price for the crop. At times unable to get the amount of picking up of tomato and transporting to market we left them like that in the farm. Some times we have dumped alongside the road, when it was believed that if would not rise the transport charges to the Market.

We have been making number of requests to the government to set up a minimum support price for the crop of tomato for years. But it was unheeded by the government. The input expenditure is mounting like a steep cliff with increases in the prices of fertilizers and pesticides and even the rates of agricultural labourers. But the outcome of the crop and the price at which it was sold were the concerns of sorrow. We strongly recommend the government to take appropriate action at the earliest possible time to bail out us from these difficult situations. We, the farming community should learn from our mistakes. We should adopt a scientific approach in selecting the crops to be grown, instead of running behind the crops which gave higher returns the previous year. I request everyone to our mite in non-repetition of this difficulty once we faced and strive for prosperous crop raising.

My name is Perayya. I am a farmer in East Godavari district. Due to sufficient rainfall our fields are with good yield. This morning I read in the newspaper that the prices of our crops are suddenly fallen due to some economic reason. I am shocked by reading the news. I am planning to market my yield to repay my loans. But the news made me mad. For the last three years there are no rains and no crops. The loan amount in the Bank is increasing day by day. Now the things are going on like this. I have no other source. How can I come out of all these problems?

I request the government to take appropriate action at the earliest possible time to bail out the farmers like me from these difficult situations.

Question 7.
What aspects of the Welfare State do you find functioning in India today? (OR)
India is functioning as a welfare state in certain aspects. What are those aspects?
Answer:

Question 8.
Read the message “From Hitler’s speech” on text page no. 194 and answer the following question. Is Hitler promoting the idea of World conquest here? Do you think world should belong to those who have power and strength alone?
Answer:

Question 9.
Do you agree with the view that women should confine themselves to pain and suffering of bringing up the children?
Answer:

Question 10.
Do you think men and women can participate equally in all aspects of life including child rearing and work in factories, offices, and fields ?
Answer:

Question 11.
Nazi ideology depended on majoritarian principles. Jews were merely 0.75 percent of the population in Germany. Apart from Jews others who opposed Nazi’s were also punished. How does the pastor capture this?
Answer:

Question 12.
In what ways was the Second World War a logical outcome of Hitler’s ideology and economic policies?
Answer:

Question 13.
Why do you think Hitler wanted to target Jews as the enemy of German people?
Answer:

Question 14.
Find out more about “Holocaust” and “Auschwitz camps” and prepare a project report based on it.
Answer:

Question 15.
Compare the experiences of the USSR and Germany after the First World War. What similarities and differences do you find between them?
Answer:
Similarities:

Question 16.
The experience of war and depression gave rise to many new alternative models of national development -what were these and what were their limitations?
Answer:

Project work
Discuss the images given on Text Page 201. Try to collect more images regarding this period. 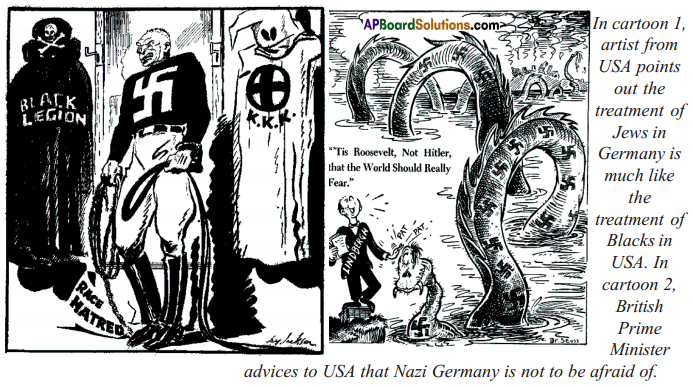