→ Set theory is comparatively a new concept in mathematics.

→ This theory was developed by George Cantor.

→ A well defined collection of objects or ideas is known as “set”.

→ Well defined means that:
i) All the objects in the set should have a common feature or property.
ii) It should be possible to decide whether any given object belongs to the set or not.
Example or comparision of well defined and not well defined collections:

→ Objects, elements and members of a set are synonymous words.

→ An object belonging to a set is known as a member/element/individual of the set.

→ Roster (or) Tabular form: In this form, all elements of the set are written, separated by commas, within curly brackets.
Example:
i) The set of all natural numbers less than 5 is represented as N = {l,2,3,4}
ii) The set of all letters in the word “JANUARY” is represented as B = {A, J, N, R, U, Y}
Note:
a) In a set notation, order is not important.
b) The elements of a set are generally not repeated in a particular set.

→ Set builder form (or) Rule method: In this method, a set is described by using a representative and stating the property (or) properties which the elements of the set satisfy, through the representative.
Example:
i) Set of all natural numbers less than 5.
A = {x : x ∈ N, x < 5}
ii) Set of vowels of the English alphabet.
V = {x : x is a vowel in the English alphabet)
Note: It may be observed that we describe the set by using a symbol (x or y or z etc.) for elements of the set. 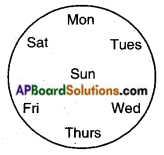 Example – 3 : An empty set, which does not contain any element (no element) is also a finite set.

→ Infinite set: A set whose elements cannot be listed, that type of set is called infinite set.

→ Universal set: A set which consists of all the sets under consideration (or) discussion is called the universal set. (or) A set containing all objects or elements and of which all other sets or subsets.
It is usually denoted by ∪ (or) μ. 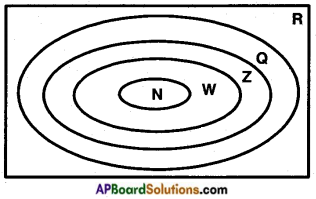 → Empty set is a subset of every set.

→ Every set is a subset of itself.

→ A set doesn’t change if one or more elements of the set are repeated.

→ Venn Diagrams: Venn-Euler diagram or simply Venn diagram is a way of representing the relationships between sets. 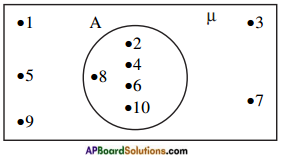 → Basic operations on sets: In sets, we define the operations of union, intersection and difference of sets.

→ Union of sets: The union of two or more sets is the set of all those elements which are either individual (or) both in common.

→ In symbolic form, union of two sets A and B is written as A ∪ B and usually read as “A union B”.

→ The union of the sets can be represented by a Venn diagram as shown (shaded portion).

→ We denote intersection by A ∩ B.

→ The intersection of A and B can be illustrated in the Venn diagram as shown in the shaded portion in the adjacent figure.

→ The disjoint sets can be represented by means of the Venn diagrams as shown in the adjacent figure.