10th Class English Chapter 5B Or will the Dreamer Wake? Textbook Questions and Answers

Question 1.
Why does the poet say that these cubs could be the last ones ever to freely live and to roam and mate?
Answer:
The tigers are in the list of endangered species. Deforestation is vigorous due to indiscriminate efforts of human beings. In this way, the habitat of tigers is reduced and the massive poaching in the past two years has wiped out the entire tiger population.

If it is continued like that, certainly there is a chance of extinction of tigers. Thus, the poet says that these cubs could be the last ones ever to freely live and to roam and mate.

Question 2.
‘She waits for all the life she’s making.’ What does the poet convey through this line?
Answer:
The hazard we are facing nowadays is global warming. Due to this problem, the snow mountains are melting rather than the normal level. The white bear survives in the gleaming snow. But the glaciers are not growing. So the white bear snuffles for its existence. The poet conveys through this line that the white bear is also in the list of endangered species as the environment is degrading and the white bear waits for all the life she’s making for the rehabilitation of the environment.

Question 3.
Why does the thrush weave her nest?
Answer:
She weaves her nest to hold her clutch.

Question 6.
What do you think the poem is about?
Answer:
The poem foreshadowed the hazards faced by the fauna of four different habitats like terrestrial, water, air, and polar regions due to humans’ indisciriminate activities in degrading the environment and how some species had come into endangered zone.

Question 8.
Who is the dreamer here? Who is being referred to?
Answer:
Humans are the dreamers here. They are apathetic and don’t bother about the extinction of endangered species.

Listen to the talk by an environmentalist on saving the trees and tick (✓) the correct options that will complete the statements.

A Talk by an Environmentalist

As you all know, to the North of India we have snow-covered mountain ranges as boundaries to our country. They are the Himalayas. You know the Himalayas are also affected by the environmental pollution. You must be wondering as to how the Himalayas get affected. The Himalayas are huge, cool ice formations surrounded by beautiful habitation. Do you know what happens if the Himalayas die? The whole of India will turn)into a desert. Can you guess what felling of trees lead to? It leads to deforestation. Specially in the Himalayan region if the trees in the forest are cut down that will give way for warming of the atmosphere and with the result melting of the Himalayas.

Do you know when the movement for the protection of the Himalayas started? It started way back in 1970s and 1980s. The movement was for the resistance to the destruction of forests throughout India. Later it became organized and known as Chipko movement.

Do you know how the movement got its name? The name (Chipko) came from a word meaning ‘embrace’. In the movement, the villagers hugged the trees and thus saved them
by putting their bodies in the way of the contractors’ axes.

Read the following essay and fill the columns in the table given after it with the correct information. 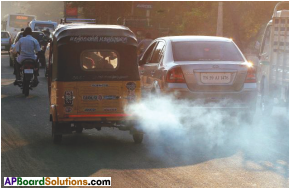 Air Pollution :
If the level of pollutants in the air is in such quantities that are injurious to human, animal, and plant life then we can say air pollution has taken place. Air pollution is caused due to a variety of reasons like increased number of vehicles, smoke from burning fuels and factories. Industriali¬zation and modernization are to be blamed for the present situation of air pollution.

Industries such as thermal power plants, cement, steel, refineries, petrochemicals, and mines emit chemical pollutants into the air causing air pollution. The air pollution is causing reduction of ozone layer which is important to protect earth from ultra violet rays that come from the sun. 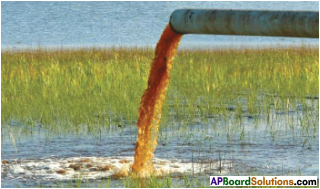 Water Pollution :
Water is being contaminated by various foreign matters. Water is thus losing its quality. Water is polluted in various ways. It can be polluted by industrial waste, agricultural waste, and landfills. Nearly 80% of wastages from cities and towns in India are diverted to rivers.

In this way rivers are getting polluted and water is becoming unfit for usage by human beings. Aquatic animals are also dying due to this pollution. Sewerage water is also directed into the rivers which cause development of various bacteria in the water making them not even suitable for bathing. 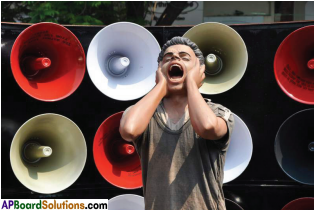 Noise Pollution :
Noise pollution is mainly caused by transportation and construction system. Noise pollution not only causes damage to the environment but shows negative effect on human health. Human beings who are exposed to noise pollution will develop high BP, stress, hearing loss, sleep disturbances, and aggression. Using noise barriers, driving the vehicles slowly, using special tyres, etc. can help lower sound pollution. The problem of noise pollution should be paid more attention. Though noise pollution is a major issue, no laws are existing in many cities of the world to control it.

Noise pollution in seas and oceans is also increasing due to ship traffic and oil drilling. This is affecting the hearing sense of animals. 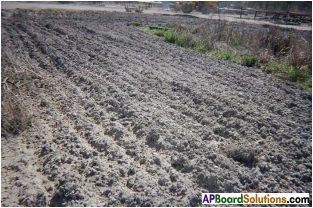 Soil Pollution :
Soil is being polluted by pesticides, oil and fuel dumping, landfill wastes, industrial wastes, etc. Chemical wastes from factories are being directly dumped on the soil and it is contaminating the soil. Increasing urbanization, decrease in agricultural lands, increase in domestic wastage, agricultural activities, industrial activities are all contributing to soil pollution in India. Plastic factories, chemical plants, oil refineries, animal farms, coal fired power plants, nuclear waste, disposal activities are the mainsburces of soil pollution. Effects of soil pollution are dangerous. They may cause acid rains which can kill trees and other plants. It disrupts the balance of nature. Soil pollution is also dangerous to wild life. Pesticides used more than required can damage the crops and poison birds, animals and fishes. 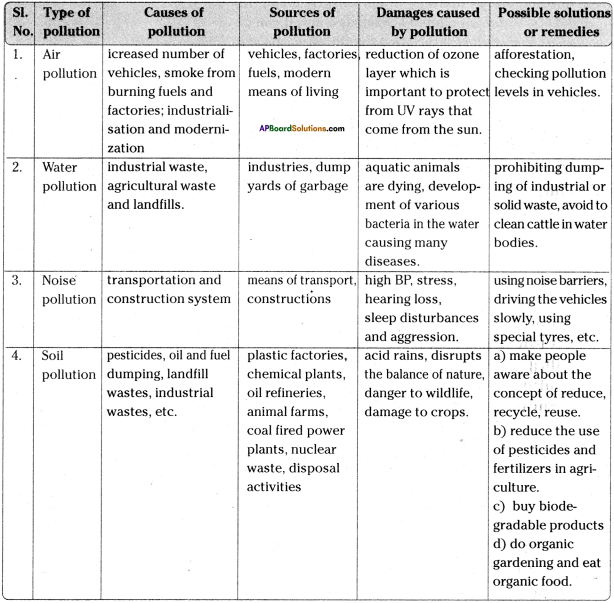 Or will the Dreamer Wake? Summary in English

Medora Chevalier focussed on the present endangered species like tiger, polar bear, thrush bird and whale. She expressed how animals would become extinct if they are not protected. In her approach it is very clear that we know the above mentioned species but for the next generations that species will be dreamer wake species as they are a few in number at present. If we do not protect the endangered species, it will be like our waving as we drown. It will be our last true moment.

Or will the Dreamer Wake? Glossary

growls (v) : makes a low sound in the throat as a sign of anger

glacier (n) : a large mass of ice which usually moves slowly down a mountain

warbles (v) : to sing with a high continuous but quickly changing sound

birth fills (n) : the process of giving birth to a baby