I. Answer the following questions briefly.

Question 4.
The author calls Murthy an introvert. Which action of Murthy substantiates this claim of the author about Murthy?
Answer:
‘Introvert’ means someone who is quiet and shy, and does not enjoy being with other people. When Murthy’s father refused to send him to IIT, he became sorrowful. Though he was sorrowful, he never shared his unhappiness or helplessness with anybody. He did not reply. He remained silent. So, we can say that Murthy was an introvert by nature.

II. Given below are some sentences from the lesson. What do they tell us about Narayana Murthy’s qualities? Use the adjectives given in the box to describe Murthy’s character. You may also use some more adjectives you like. 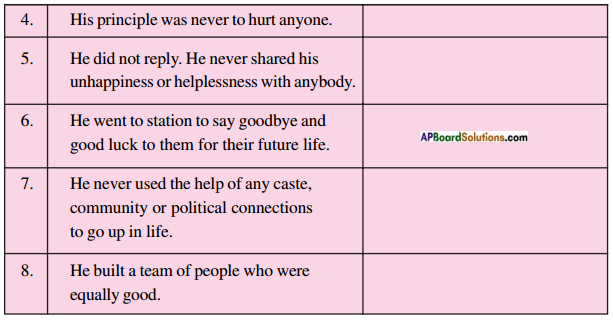 Tick (✓) the most appropriate one-word substitutes for the following.
1. A person or thing that cannot be corrected
a) unintelligible
b) Indelible
c) illegible
d) incorrigible
Answer: d

2. A persoiì of good understanding. knowledge and reasoning power
a) expert
b) intellectual
c) snob
d) literate
Answer: b

3. A person who knows many languages
a) linguist
b) grammarian
c) polyglot
d) bilingual
Answer: c

4. One who possesses many talents
a) versatile
b) prodigy
c) exceptional
d) gifted
Answer: a

You have read about Nick Vujicic, who has accomplished every seemingly impossible thing in life despite having the most difficult form of disability. You have read about Narayana Murthy, who is one of the most remarkable examples to win over the unbeatable difficulties. You may also have heard or read about some remarkable Indian women such as Sudha Murthy, Sudha Chandran, Kiran Bedi and many other women who have crossed all the hurdles to become successful.

Now, work in pairs and collect information about the women who you think have excelled in their lives though they may not have come into limelight. 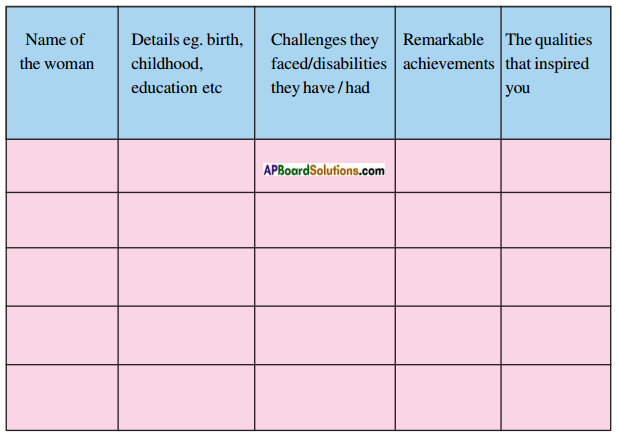 I. Based on the information you gather about the persons, prepare a short biographical account of the person you like the most, emphasizing the exemplary work done by him/her and present it to the group/ whole class.
Answer:
Ms. Srivalli was born on 15th August, 1992. She came from a poor family. Her father was a musician and her mother was a teacher. She was a bright student. Unfortunately, she met with an accident when she was eleven and the doctors amputated both her legs. After two years of relentless struggle, she could go back to her school. She could walk with the help of artificial limbs and slowly run. Now, she can do anything like a normal woman. She learnt music from guru Rama Sastry and now she is a good singer and composer of songs. In spite of her disability, she has worked hard with great determination, discipline and dedication and achieved her target.

After she had met with the accident, her heart sank in sorrow. Sometimes she wanted to die. She hated God for doing this to her. She was terrified of her losing both the limbs. Her doctor Mr. Rao always encouraged her by telling her that she could walk and run normally. She tried and tried until she could walk. She didn’t give up at any stage. Srivalli always says, “The challenges in our lives are there to strengthen our convictions. They are not there to run us over.” With the help of her parents, friends . and guru, Srivalli has managed to reach such a position in her life. She has proved that anything can be done, if one tries hard. From her life, we can understand that one need not lose hope. Her life shows us that one s disability can’t prevent one from reaching one’s target. I feel that her life is a source of inspiration to every woman. She is able to do all these only because of her strong will power. Hence, I believe in will power with which one can achieve wonders in one’s life. I would like to wish all the best for her in the future.

II. You may also present this write up on the occasion of “Women’s Day” in your school.
Answer:
Our beloved headmaster, dear teachers and my fellow students!
I wish you a very good morning and welcome you all to the programme. At the outset, I would like to greet all the women a very happy ‘Women’s Day.’

As we all know that 8th March is celebrated as International Women’s Day to commemorate women’s achievements and the contributions made by them to the society This day is also known as the United Nations Day for women’s rights and international peace.

I have a great pleasure to say a few words about a great girl Mary Griffith on this occasion. Mary Griffith, a thirteen year old girl, has set national records in track and swimming. She has been studying at the Mundelein Middle School and has cerebral palsy. In spite of her disability she set her records in 2004 and 2005 at the National Junior Disability Championships. She always say that sports have given her a lot more confidence and taught her to balance her life. Though she has been suffering from cerebral palsy, she hasn’t lost her hope. With great faith and determination she has done so well and set her own records. Her efforts are inspirational to all the women.

We all wish her a great future and with this I will end my speech. I thank one and all for giving me this chance to share my views with you.

I Will Do It Summary in English

Nagavara Ramarao Narayana Murthy is the founder of Infosys, a leading IT company in the world. He is an icon of simplicity, uncompromising quality and fairness, apart from being a philanthropist. He believes in the motto, ‘Powered by intellect and driven by values.’

As a school going lad, Narayana Murthy was the brightest boy in his class. He could solve the most difficult problems which were very hard for his seniors. He came from a poor but educated family. His father was a high-school teacher. As all other students, Narayana Murthy wanted to get admission in the IIT. He appeared for the entrance test and did well. He always dreamt of studying at IIT. He was thrilled to know that he had passed the test with a high rank.

When Narayana Murthy told his father that he wanted to join IIT, his father reminded him of their poverty. Murthy’s father advised him to stay in Mysore and study as much as he wanted. His father was very sad to say this. Murthy was disappointed and his heart sank in sorrow. He was an introvert so he never shared his sorrowfulness or helplessness with anybody. When his classmates were leaving for Madras, Murthy went to the station to say goodbye to them. Though they were all excited and talking loudly, Murthy remained silent. He wished them and they waved at him as the train slowly left the platform. Even after the train had left, he stood there motionless. He believed that he only could change his life by hard work. He unknowingly followed “Your best friend is yourself and your worst enemy is yourself, the philosophy of the Bhagavath Gita. With great determination, Narayana Murthy reached great heights in his life. He proved that it was possible to earn wealth legally and ethically.

I Will Do It about the Author

Sudha Murthy, wife of N.R. Narayana Murthy, is an Indian social worker and author. Murthy began her professional career as a computer scientist and engineer. She is the chairperson of the Infosys Foundation. She has founded several orphanages, participated in rural development efforts, supported the movement to provide all Karnataka government schools with computer and library facilities, and established the ‘The Murthy Classical Library of India’ at Harvard University.

Murthy also teaches Computer Science. She composed a fiction, Dollar Sose. The present story is an extract from one of her most successful stories ‘How I Taught my Grandmother to Read & Other Stories.’

I Will Do It Glossary

spark (n): a small amount of particular quality or feeling

avid (adj): doing something as much as possible

admission (n): the right to join an institution

aspirant (n): someone who hopes to get a position of importance or honour

guide (n): a person who can advise others

D-Day (n): a date on which something important is expected to happen.(From the name given to June 6, 1944. the day on which the US., British, and other armies landed on the beaches of northern France in the Second World War.)

expenses (n): expenditure / money that one spends on something

introvert(n): a quite person who is interested in his / her own thoughts and feelings.

jealously (adv): being unhappy over something

pioneer (n): a person who is the first to do something

icon (n): a famous person or thing that people admire and see as a symbol of a particular idea, way of life, etc.

philanthropist (n): one who devotes his service or wealth for the love of mankind

powered by intellect and driven by values: According to Narayana Murthy Intellect (mind power) should be the power of every man. He should be driven (influenced) by values.