Question 3.
Complete the following table about the failures and successes of the great personalities mentioned in the lesson you have just read. The first one is done for you. 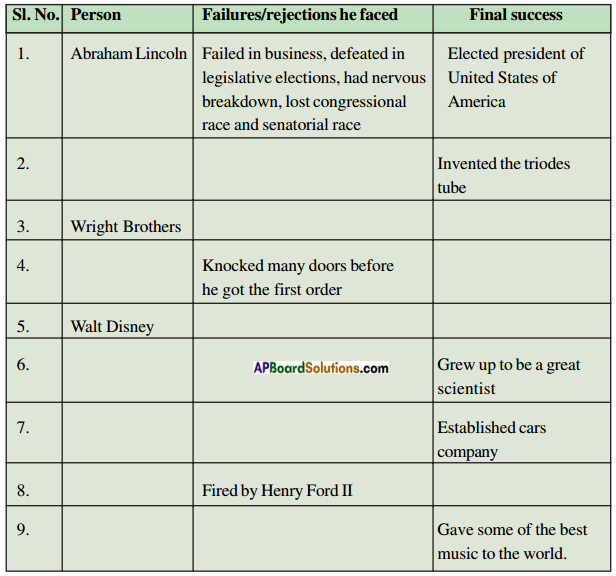 An elderly carpenter was ready to retire. He told his employer-contractor of his plans to leave the house-building business to live a more leisurely life with his wife and enjoy his extended family. He would miss the paycheck each week, but he wanted to retire. They could get by.

The contractor was sorry to see his good worker go and asked if he could build just one more house as a personal favour. The carpenter agreed. But over time it was easy to see that his heart was not in his work. He resorted to shoddy workmanship and used inferior materials. It was an unfortunate way to end a dedicated career.

When the carpenter finished his work, his employer came to inspect the house. Then he handed the front-door key to the carpenter and said, “This is your house… my gift to you.”
The carpenter was shocked!

What a shame! If he had only known that he was building his own house, he would have done it all so differently.
So it is with us. We build our lives, a day at a time, often putting less than our best into the building. Then, with a shock, we realize we have to live in the house we have built. If we could do it over, we would do it much differently.

But, you cannot go back. You are the carpenter, and every day you hammer a nail, place a board, or erect a wall. Someone once said, “Life is a do-it-yourself project.” Your attitude, and the choices you make today, help build the “house” you will live in tomorrow. Therefore, build wisely!

I. Complete the table given below. 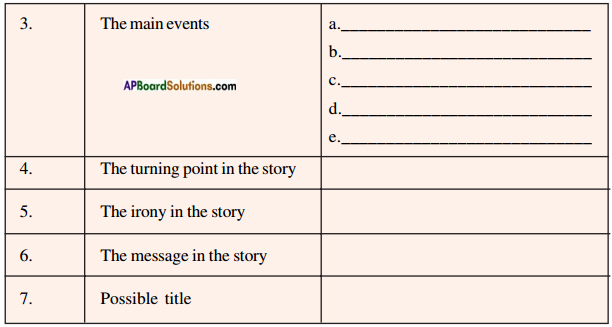 Rewrite the above story by giving another ending.

Answer:
An elderly carpenter was ready to retire. He told his employer-contractor of his plans to leave the house-building business to live a more leisurely life with his wife and enjoy his extended family. He would miss the paycheck each week, but he wanted to retire. They could get by.

The contractor was sorry to see his good worker go and asked if he could build just one more house as a personal favour. The carpenter agreed. He wanted to build the house using all his skill. He knew that his employer had confidence and faith in him. He began his work and completed with determination. He gave the final touch to the house and invited his employer. The employer came to inspect the house.

The contractor was amazed to see the house with all its fine work. He praised the carpenter for building such a beautiful house. He thanked the carpenter and gave him a big amount of money. The carpenter felt very happy thanked his employer and went away.

Listen to the story about a farmer.

After listening to the story, work in pairs and discuss the advantages and disadvantages of travelling abroad. You may use the hints given in the box for your understanding.

All stories of success are also stories of great failures. Failures are the stepping stones to success. We all know that Abraham Lincoln was the President of the United States, It was not an easy thing for him to reach such a great height in his life. He faced major setbacks in business as well as politics before he was elected President of the United States at age 52. He didn’t lose hope and give up his efforts.

Lee De Forest was the inventor of the triodes tube. In 1913, he was charged for using dishonest means to mislead the public. Though he was publicly humiliated, he didn’t stop his efforts and made so many inventions.

The Wright Brothers successfully took their flight after their wisdom was questioned by a New York Times editorial.

Colonel Sanders was the founder of KFC chain restaurants. He, at age 65* worked hard and succeeded in selling food items. He had knocked on more than a thousand doors before he got his first order.

Walt Disney, the famous cartoonist faced many rejections before his getting the success. He created Mickey Mouse when he was working out of a small mouse infested shed near the church.

Thomas Edison, who was partially deaf, failed 10,000 times while he was working on the light bulb. He didn’t give up and got the success finally. He was the man with great attitude. Though he lost his factory to fire, he went on inventing the phonograph. He didn’t lose hope at any stage of his life.

Henry Ford forgot to put the reverse gear in the first car he made and went broke at the age of 40. He succeeded later and reached top position in selling of cars.

Ludwig van Beethoven was a German composer and pianist. Though he was told that he had no talent for music, he gave some of the best music.

All these persons succeeded in spite of their problems. A setback can act as a driving force and teach us humility. We have to find courage and faith to overcome the setback. We must get rid of fear and doubt. We need to try to become victors. We need to have burning desire to achieve our task. A burning desire is the key to one’s success. We can’t get great results with a weak desire.

IF YOU THINK Summary
Success, failure, win, defeat – these ail depend upon the man’s thinking. Success begins with a fellow’s will. If one thinks he is beaten or lost, it certainly happens. If one thinks one is outclassed, one is outclassed. So, one needs to be positive in one’s thoughts. One needs to think high to get success. The person who thinks can easily win in the end. ‘ Victory is not always on the side of the stronger and faster man.

Shiv Khera is an Indian author of self-help books and activist.
While working in the United States, he was inspired by a lecture delivered by Norman Vincent Peale and followed his motivational teachings. Khera has written several books including You Can Win.
His mission is “to ensure freedom through education and justice.”

Shiv Khera was born in a business family who used to have coal mines Kendua in Dhanbad, India. Soon after the nationalisation of coal mines by the Indian government, he had to search for his own living. In his early years he worked as a car washer, a life insurance agent, and a franchise operator before he became a motivational speaker.

Every Success Story is Also a Story of Great Failures Glossary

overcome(v): to defeat or succeed in controlling or dealing with something

detour(n): a road or route that is used when the usual one is closed

Lee de Forest: an American inventor with over 180 patents to his credit. He invented the Audion, a vacuum tube that takes relatively weak electrical signals and amplifies them. He is one of the fathers of the “electronic age,” as the Audion helped to usher in the widespread use of electronics. He is also credited with one of the principal inventions that brought sound to motion pictures.

fraudulent (adj): intended to cheat someone, usually in order to make money illegally

humiliate (v): to make someone feel ashamed or stupid

quit (v): to leave ; to stop doing something

recipe (n): set of instructions for cooking a particular type of food

Walt Disney: an American animator, film producer, director, screenwriter, voice actor, entrepreneur entertainer, international icon and philanthropist, well known for his influence in the field of entertainment during the 20th century. He created some of the world’s most well-known fictional characters including Mickey Mouse.

rejection (n): the act of not accepting

Infest(v): to exist in large numbers in a particular place, often causing damage or disease (especially of insects or animals such as rats)

Henry Ford: an American industrialist, the founder of the Ford Motor company, and sponsor of the development of the assembly line technique of mass production. He did not Invent the automobile but he developed and manufactured the first automobile that many middle class Americans could afford to buy.

disaster (n): a sudden event such as a flood, storm or accident

Lee Iacocca: an American Business man known for engineering the Ford Mustang and Ford Pinto cars. He was the former chairman of the Chrysler Corporation. He was one of the most famous business people in the world. He is the author (or coauthor) of several books, including Iacocca.

Ludwig van Beethoven: a German composer and pianist. He was a crucial figure in the transition between the Classical and Romantic eras in Western art music. He remains one of the most famous and influential of all composers. His best known compositions include 9 symphonies. 5 concertos, 2 piano sonatas and 16 string quartets. He also composed other chamber music, choral works (Including the celebrated Missa Solemnis and songs).

inevitable (adj): certain to happen : that you cannot avoid or prevent

setback (n): a problem that delays or prevents progress

humility (n): the quality of not being too proud about oneself.

stumbling block (n): a problem or difficulty that stops oneself from achieving something

Napoleon Hill: an American author in the area of the new thought movement who was one of the earliest producers of the modern genre of personal-success literature. He is widely considered to be one of the great writers on success.

conceive(n): to form an idea, a plan, etc. In your mind; to imagine something

Socrates (469 BC – 399 BC): a classical Greek Athenian philosopher credited as one of the founders of Western Philosophy; He is an enigmatic figure known chiefly through the accounts of later classical writers, especially the writings of his students Plato and Xenophon and the plays of his contemporary Aristopanes. Many would claim that Plato’s dialogues are the most comprehensive accounts of Socrates to survive from antiquity. Socrates has become renowned for his contribution to the field of ethics.

ducked(v): pushed somebody under water and held them there for a short time

gasp (v): to breathe quickly in a way that can be heard because one is having difficulty in breathing .

accomplishment (n): something successful or impressive that is achieved after a lot of effort and hard work

cinch(n): a thing that is certain to happen

will (n): determination to do something that one has decided to do