Question 1.
What information does the electronic configuration of an atom provide? (AS1)
Answer:

Question 7.
What is an orbital? How it is different from Bohr’s orbit? (AS1)
(OR)
Comparison between orbit and orbital.
Answer:
The region of space around the nucleus where the probability of finding electron is maximum is called orbital. Whereas orbit is the path of the electron around the nucleus.

As ‘n’ increases, the orbitals become larger and the electrons in those orbitals are farther from the nucleus.

The number of electrons in a shell is limited to 2n².

l also governs the degree with which the electron is attached to nucleus. The larger the value of l, the smaller is the bond with which it is maintained with the nucleus.

ml has integer values between – l and l including zero.

The number of values for m, are 2l + l, which give the number of orbitals per sub-shell. The maximum number of electrons in orbitals in the sub-shell is 2 (2l + l).

Question 10.
Following orbital diagram shows the electronic configuration of nitrogen atom. Which rule does not support this? (AS1)

(OR)
Write the correct electronic configuration of the given nitrogen atom with the help of Hund’s rule.
Answer:

Question 11.
Which rule is violated in the electronic configuration 1s0 2s² 2p4?
Answer:

Question 13.
What is emission spectrum?
(OR)
When radiation is emitted what is the name given to such spectrum? Explain such spectrum.
Answer:

Emission spectrum is of two types :

a) Line spectrum :
The spectrum with sharp and distinct lines. It is given by gaseous atoms.

b) Band spectrum :
The spectrum very closely spaced lines is known as band spectrum. It is given by molecule.

Question 14.
i) An electron in an atom has the following set of four quantum numbers to which orbital it belong to : (AS2)
Answer:

This electron belongs to 2s orbital.
Spin is in clockwise direction. ⇒ 2s¹

Question 18.
Why are there exemptions in writing the electronic configurations of Chromium and Copper?
Answer:
1. Elements which have half-filled or completely filled orbitals have greater stability.

2. So in chromium and copper the electrons in 4s and 3d redistributes their energies to attain stability by acquiring half-filled and completely filled d-orbitals.

3. Hence the actual electronic configuration of chromium and copper are as follows.

4. The quantum number which explains about size and energy of the orbit or shell is
A) n
B) l
C) ml
D) ms
Answer:
A) n

Question 1.
How many colours are there in a rainbow? What are they?
Answer:
There are seven colours in a rainbow. They are Violet, Indigo, Blue, Green, Yellow,Orange and Red.

Question 3.
Can we apply this equation c = uA, to a sound wave?
Answer:
Yes. It is a universal relationship and applies to all waves.

Question 4.
What happens when you heat an iron rod on a flame? Do you find any change in colour while heating an iron rod?
Answer:

Question 5.
Do you observe any other colour at the same time when one colour is emitted?
Answer:
While heating the rod if the temperature is high enough, other colours will also be emitted, but due to higher intensity of one particular emitted colour (eg.: red), others cannot be observed.

Question 9.
What happens when an electron gains energy?
Answer:
The electron moves to higher energy level called the excited state.

Question 10.
Does the electron retain the energy forever?
Answer:
The electron loses the energy and comes back to its ground state. The energy emitted by the electron is seen in the form of electromagnetic energy.

Question 14.
What is the velocity of the electron?
Answer:
It is very close to light.

Question 15.
Is it possible to find exact position of electron? How do you find the position and velocity of an electron?
Answer:
No, as the electrons are very small, light of very short wavelength is required for this task.

This short wavelength light interacts with the electron and disturbs the motion of electron. So it is not possible to find exact position and velocity of electron simultaneously. Whereas we can find the region where the probability of finding electron is more.

Question 19.
What does each quantum number signify?
Answer:
The quantum numbers signify the probability of finding electron in the space around nucleus.

Question 22.
Do all the p-orbitals have the same energy? A. Orbitals in the sub-shell belonging to same shell possess same energy but they differ in their orientations.

Question 23.
How are two electrons in the Helium atom arranged?
Answer:
They are arranged in pair in Is orbital and the electronic configuration is 1s².

Question 25.
How many electrons can occupy an orbital?
Answer:
An orbital can hold only two electrons.

Question 1.
Explain the wave nature of light.
(OR)
How does light behave? Explain.
Answer:

Question 3.
Complete the electronic configuration of the following elements. 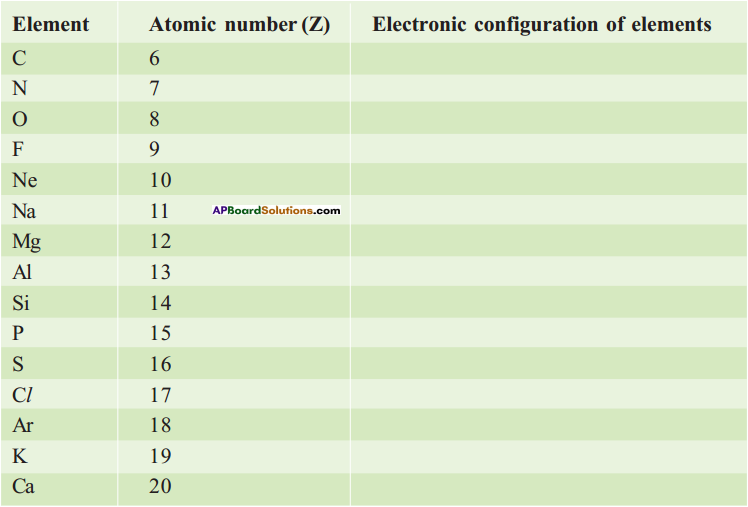 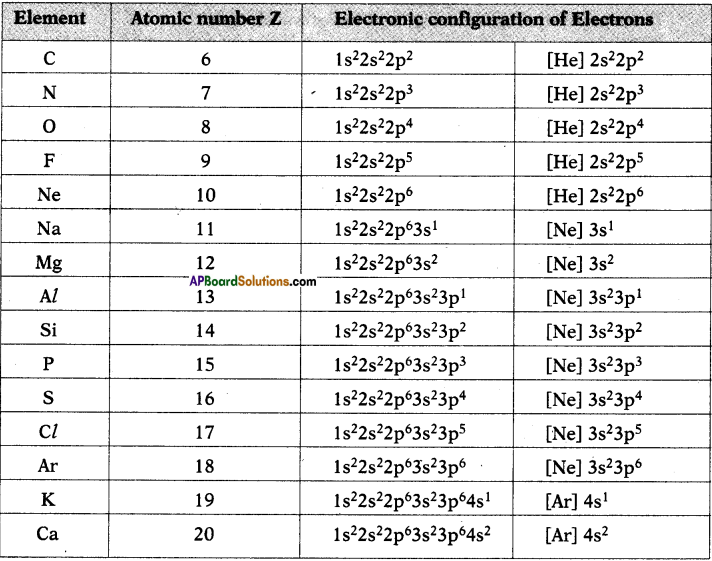