Question 1.
What happens to the amount of energy transferred from one step to the next in a food chain?
Answer:

Question 2.
What do pyramids and food chain indicate in an ecosystem?
Answer: 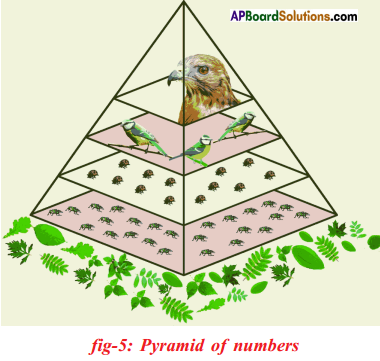 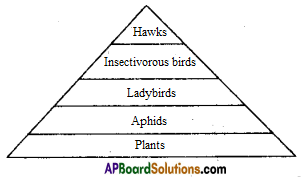 Question 4.
What is biomass? Draw a pyramid of biomass for the given food chain.
i) grass leaves ii) herbivores iii) predators iv) hawk
Answer:

Question 5.
How is using of toxic material affecting the ecosystem? Write a short note on bioaccumulation and biomagnifications.
Answer:

Question 7.
What is a tropic level? What does it represent in an ecological pyramid?
Answer:

Question 9.
What will happen if we remove predators from food web?
Answer: 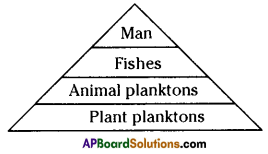 Question 2.
If we want to show a food chain consisting of grass, rabbit, snake and hawk then connect the given picture of organisms by putting arrows and make a food chain.
A) Name the producers and consumers in the above food chain.
B) Try to guess what does the arrows marked by you are indicate?
C) Identify at least four other food chains from your surroundings. Name the producers and different levels of consumers in those food chains.
Answer:
Grass → Rabbit → Snake → Hawk
A) In the above food chain grass is the primary producer. Rabbit is the primary consumer, snake is the secondary consumer and hawk is the tertiary consumer.
B) The arrows indicate the flow of energy from one organism to another. So these are always pointed from the food to the feeder.
C)

Question 3.
Why do most of the food chains consists of four steps?
Answer:

Question 4.
Why do the number of organisms get decreased as we move from producer to different level of consumers?
Answer:

Question 5.
Draw the pyramid of number for the following food chains.
i) Banyan → insects → woodpecker
ii) Grass → rabbit → wolf
A) Are the pyramid of number having same structure in both of the above two cases as compare to the example given in the earlier paragraph?
B) If there is a difference, then what it is?
Answer:

A) No. The pyramid of number in the above two cases doesn’t have the same structure as compared to the example given in the textbook.
B)

Question 6.
Think why the pyramids are always upright?
Answer:

Question 7.
Observe the data given in the following table.

i) In which year lake-water spread area is more? Why?
Answer:
In the year 1967. Because lake was not brought under cultivation.

iii) What are the reasons for decrease in lake area?
Answer:

iv) How do the above reasons lead to pollution?
Answer:

v) How was the threat to the lake due to pollution discovered?
Answer:

vi) What could be the reasons for the migration of birds to this lake?
Answer:
To avoid extreme cold weather conditions in Northern Asia and Eastern Europe birds migrate to Kolleru lake.

Question 8.
Observe the following table showing different activities in the lake and their influence. 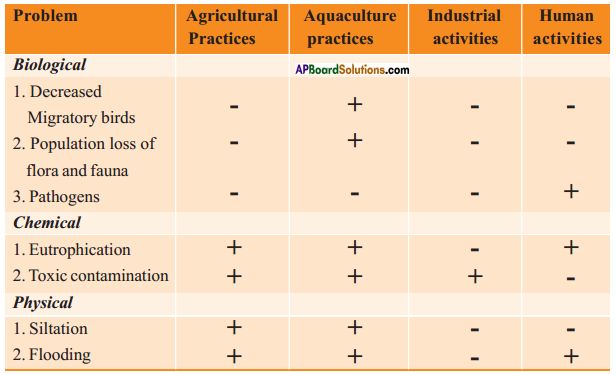 ii) Do you find any relationship between biological and physical problems?
Answer:
Yes. Aquaculture practices have influence on these problems.

v) Is BOD of turbid and nutrient rich water high or low? What are its consequences?
Answer:
High. Its consequences are water borne diseases and death of organisms.

vi) People living in catchment area of Kolleru faced so many problems. Why?
Answer:
Vector borne disease increased. The lands adandoned are useless for agriculture.

Question 12.
How can you say fishes living in water having heavy metals in their bodies?
Answer:
The bioaccumulation of heavy metals in tissues of fish particularly in liver, kidney and gills were analysed and found their presence.

Question 13.
Researchers found that pollution levels increase during monsoon season. Why they found so?
Answer:

Question 16.
How did the campaign disturb the food chain in the fields?
Answer:

Question 17.
How did these disturbances affect the environment?
Answer:

Question 18.
Is it right to eradicate a living organism in an ecosystem? How is it harmful?
Answer:

Question 19.
Were the sparrows really responsible? What was the reason for the fall in crop production?
Answer:

Question 20.
What was the impact of human activities on the environment?
Answer:

Question 21.
What do you suggest for such incidents not to occur?
Answer:

Observe any water ecosystem in your surroundings and identify the different food chains and food web operating in this ecosystem. Write the following details in your notebook.