Question 1.
What are variations? How do they help organisms?
Answer:

Question 2.
One student (researcher) wants to cross pure tall plant (TT) with pure dwarf (tt) plant, what would be the Fj and F2 generations? Explain.
Answer:

Question 3.
One experimenter cut the tails of parent rats, what could be the traits in offsprings? Do the daughter rats contain tails or not? Explain your argument.
Answer:

Question 5.
ExplaIn monohybrid experiment with an example. Which law of inheritance can we understand? Explain.
Answer:

2) When F1 plants are self pollinated each parent passes randomly selected allele (Y or y) of one of these factor to offsprings. This is segregation of alleles or genes during production of gametes.
This is “LAW OF SEGREGATION”.

Question 6.
What is the law of independent assortment? Explain with an example.
Answer:

Question 9.
What are variations? Explain with a suitable example.
Answer:

Question 12.
In what way Mendel used the word ‘Traits’? Explain with an example.
Answer:

Question 14.
Male is responsible for sex determination of baby – do you agree? If so write your answer with a flow chart.
Answer:

Question 16.
How do scientists utilise information about fossils?
(OR)
“Fossils are valuable material that nature had preserved to know about ancient organisms.” Write the information you have collected about fossils.
Answer:

Question 19.
Collect information on the inherited traits in your family members and write a note on it.
Answer:

Question 20.
With the help of given information write your comment on evidences of evolution.

Mammals have fore limbs as do birds, reptiles and amphibians. The basic structure of the limbs is similar, though it has been modified to perform different functions.

Question 22.
Draw a checker board, show the law of independent assortment with a flowchart and explain the ratio.
Answer: 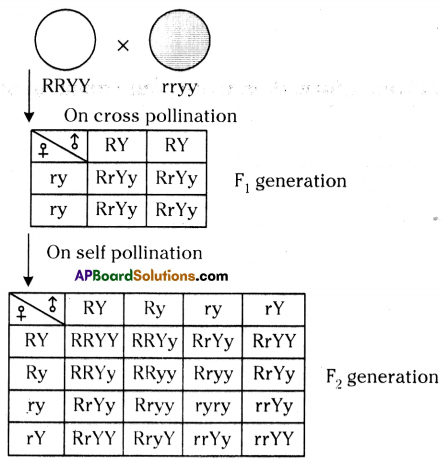 Question 23.
Explain the process to understand the monohybrid cross of Mendel experiment with a checker board.
Answer: 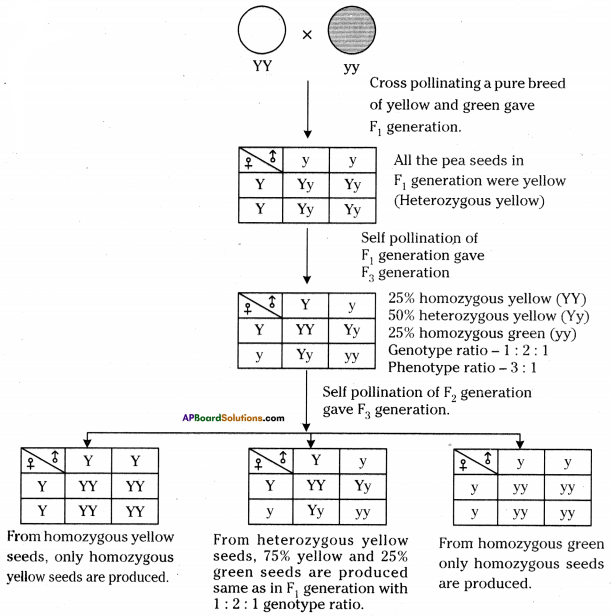 Question 24.
Prepare a chart showing the evolution of man through ages.
Answer: 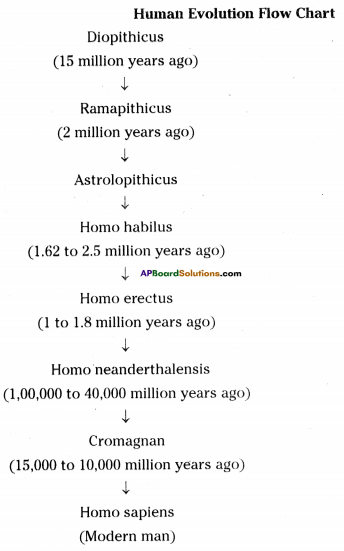 Question 26.
What is your understanding about survival of the fittest? Give some situations or examples that you observe in your surroundings.
Answer:

Question 27.
Write a monologue on the evolution of a human to perform a stage show on the theatre day in your school.
Answer:

Fill in the blanks.

Question 2.
Is variation all about apparent differences? Or is it about some subtle differences as well that we most often overlook?
Answer:

Question 3.
How do parent plants pass on their traits to the seeds?
Answer:

Question 5.
What should be the percentage of each type of plants in F2 generation produced in dihybrid cross between pea plants with yellow, smooth seeds and green wrinkled seeds?
Answer:

Question 6.
What will happen if the sperm containing X chromosomes fertilizes the ovum?
Answer:

Question 8.
Is the sex also a character or trait? Does It follow Mendels’ law of dominance?
Answer:

Question 9.
Were all your traits similar to that of your parents?
Answer:

Question 10.
How does the evolution of organisms have taken place?
Answer:

Question 11.
Are birds and bats more closely related to each other than to squirrels or lizards?
Answer:

Question 13.
Does the life history of every individual exhibit the structural features of their ancestors?
Answer:

Question 14.
Think why did ancient human beings travelled from one place to other and how did they travelled?
Answer:

Think of your own family, what similarities do you share with your father and mother? Draw a table to represent the similarities of some characters like colour of eye (cornea), colour of hair, shape of nose, shape of face, type of earlobe (attached or free), inner thumb markings, etc. Write your characters in one column and that of your parents in the other columns.
Table – 1

2. Is there any character in you similar only to that of your grandma?
Answer:
Two characters are similar in me and in my grandma. They are

5. Think where from your mother got that character?
Answer:
This character is the result of inherited traits transmitted from parent to progeny.

Activity – 2
Observe some of your friends and note their characters in the following table. Fill in yours as well.
Table – 2

Observe seeds in a pea or bean pod. You may observe several parts to arrive at a generalisation.

1. Can you find two similar seeds there?
Answer:
No, all the seeds are not similar. They had certain variations.

2. What makes them vary? even though they are in the same pod. (Hint: You know that seeds are formed from ovules).
Answer:

3. Why variations are important? How are variations useful for an organism or a population?
Answer:

Method: Prepare a chart with 2×2 boxes along with number and symbol as shown in the figure. 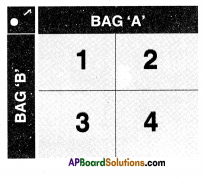 Take 4 pairs each of long and short strips and put them in two separate bags. Now each bag contains 8 strips (4 long and 4 short).One bag say ‘A’ represents male and the bag ‘B’ represents female. Now randomly pick one strip each from bag A and B and put them together in the 1 on the chart. Keep picking out the strips and arrange them in the same manner till your bags are empty. Same time your boxes in the chart are filled with pairs of strips. You might have got the following combinations, two long strips, one long and one short strip, two short strips.

3. What is the number of short strips pairs?
Answer:
There are four short strip pairs.

Observe the below diagram showing variation in beetle population and its impact. 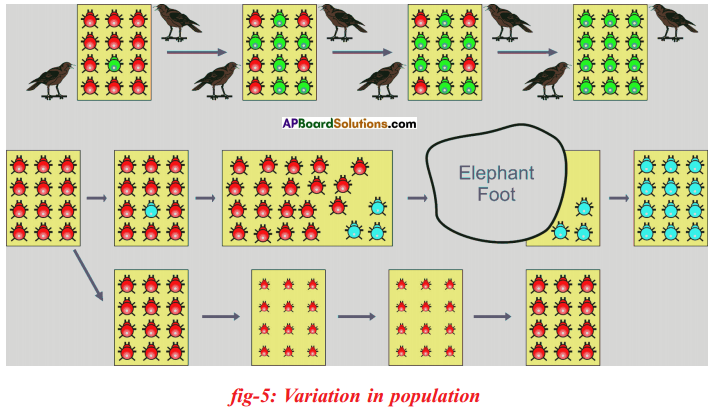 Let us consider a group of twelve beetles. They live in bushes on green leaves. Their population will grow by sexual reproduction. So they were able to generate variations in population. Let us assume crows eat these red beetles. If the crows eat more Red beetles, their population is slowly reduced. Let us discuss the above three different situations in detail.
Answer:
Situation-1: In this situation, a colour variation arises during reproduction. So that there appears one beetle that is green in colour instead of red.

The variation of colour in beetle ‘green’ gave a survival advantage to’green beetles’ than red beetles. In other words it was naturally selected. We can see that the ‘natural selection’ was exerted by the crows. The more crows there are, the more red beetles would be eaten and the more number of green beetles in the population would be. Thus the natural selection is directing evolution in the beetle population. It results in adaptation in the beetle population to fit in their environment better.

Let us think of another situation.
Situation-2: In this situation a colour variation occurs again in its progeny during reproduction, but now it results in ‘blue’ colour beetles instead of ‘red’colour beetle. This blue colour beetled can pass its colour to its progeny. So that all its progeny are blue.

Thus sometimes accidents may also result in changes in certain characters of the population. Characters as we know are governed by genes. Thus there is change in the frequency of genes in small populations. This is known as “Genetic drift’, which provides diversity in the population.

Let us think of another situation :
Situation-3: In this case beetles population is increasing, but suddenly bushes were affected by a plant disease in which leaf material were destroyed or in which leaves are affected by this beetles got less food material.

So beetles are poorly nourished. So the weight of beetles decrease but no changes take place in their genetic material (DNA). After a few years the plant disease are eliminated. Bushes are healthy with plenty of leaves.

What do you think will be condition of the beetles?
Answer:
The weight of beetles will increase once again as they get plenty of food material again.

Let us observe different stages of development of vertebrate embryos. Try to find out similarities and differences and discuss with your friends.
(OR)
What do you infer about the embroyological evidences of various organisms?
Answer: 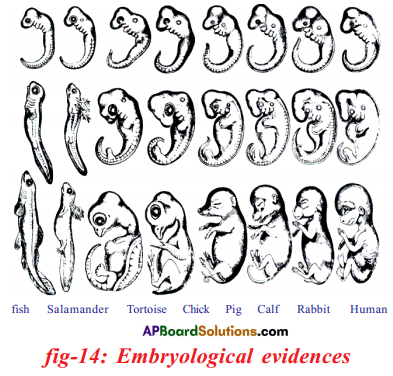