Question 2.
By taking two plants of your surroundings as examples, explain how they protect themselves against the animals which eat them.
Answer:

Question 4.
Write the names of producers and consumers in the food chain, you have observed.
Answer:
Producers – Plants, Green Algae
Consumers – All Animals.

Question 5.
Write any two slogans to promote awareness among the people about Ecofriendly programs.
Answer:
a) Lets go green to get global clean.
b) If you disturb the nature, the nature will disturb you.
c) The best solution to arrest pollution is plantation.
d) Reduce the usage of plastic and reduce the pollution.

Question 6.
What happens if decomposers are removed from the food web?
Answer:

Question 7.
Observe the following given below. Draw the pyramid of numbers.
Grass → Goat → Man
Answer: 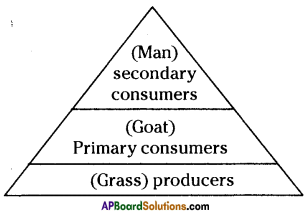 Question 8.
We can’t expect the world without sparrows. So how should be our concern towards their conservation?
Answer:

Question 9.
Human being is modifying agriculture lands and lakes into residential areas. What is its effect on Bio-diversity?
Answer:

Question 11.
The figure given below represents a food pyramid. Study it and answer the following questions.

Question 13.
What is environment?
Answer:
The sum of physical and biological factors along with their chemical interactions that affect an organism is called environment.

Question 16.
What does a food chain show?
Answer:
Food chain shows that how the energy is passed from one organism to another.

Question 20.
What is food web?
Answer:
The network of a large number of food chains existing in an ecosystem is called a food web.

Question 21.
What does a food web indicate?
Answer:
A food web indicates that the number of possible links for food in an ecosystem and reflects the fact that the whole community is a complex inter-connected unit.

Question 22.
What is ‘niche’?
Answer:
The position of organisms in a food web.

Question 23.
What does the word ‘niche’ denotes?
Answer:
‘Niche’ is the term used to describe not only the animals position in the food web and what it eats but also its mode of life.

Question 24.
What is an ecological pyramid?
Answer:
The graphic representation of the feeding level structure of an ecosystem by taking the shape of a pyramid is called “Ecological pyramid”.

Question 27.
What is pyramid of number?
Answer:
A graphical representation designed to show the number of organisms at each tropic level in a given ecosystem is called “pyramid of number”.

Question 31.
What is biomass?
Answer:
Any type of plant or animal material that can be converted into energy is called biomass.

Question 32.
What is biofuels?
Answer:
The materials which are used for energy production are known as biofuels.

Question 33.
What is Pyramid of biomass?
Answer:
A graphical representation designed to show the quantity of living matter at each tropic level in a given ecosystem is called “Pyramid of biomass”.

Question 34.
Why Pyramid of biomass inverted in case of aquatic ecosystem?
Answer:

Question 49.
What are pesticides?
Answer:
The chemical materials used to control pests that attack crop plants or live as parasites on the body of farm animals are called pesticides.

Question 60.
How can we draw a food chain?
Answer:
We can draw a food chain by connecting the pictures or names of organisms by putting arrows between them. These arrows should always point from food to the feeder.

Question 1.
Grass → Grasshopper → Frog → Snake → Hawk
What will happen if we remove Frog from the above food chain? Explain.
Answer:

Question 2.
Observe the diagram and answer the following. 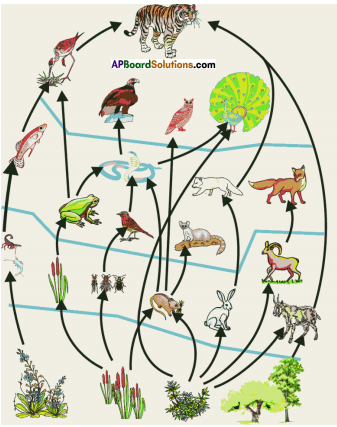 i) Write any two food chains from the diagram.
ii) What are the secondary consumers in the food chain that are written by you?
Answer:
i) a) Plants → Goat → Tiger
b) Plants → Rabbit → Wolf / Fox
ii) Tiger, Wolf / Fox

Question 3.
Study the given paragraph and answer the questions.

Solar energy from sun enters into the producers of an ecosystem. No organisms except green plants and photosynthetic bacteria can absorb solar energy and convert it into chemical energy.

Question 4.
Explain the flow chart given below. 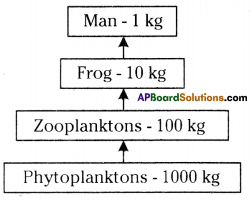 Answer:
It is the pyramid of biomass.

Question 5.
Observe the pyramid of number which is given below and answer the questions.

Question 6.
Explain in brief about the alternate methods to be followed to prevent the harmful effects of over usage of pesticides.
(OR)
Mention any four effective methods of controlling pests, which are less harmful on environment based on biological principles.
Answer:
Some of alternative pest control methods are

Question 7.
Write any 4 slogans on the necessity of forests and on their conservation.
Answer: 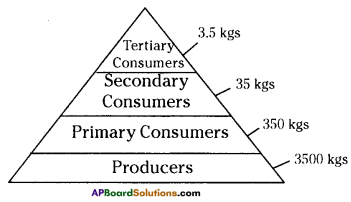 Question 12.
Write a short notes on pyramid of number.
Answer:

Question 13.
Write a short notes on pyramid of biomass.
Answer:

Question 14.
How do pesticides cause Bioaccumulation and Biomagnification?
(OR)
What are the effects of pesticides on environment?
Answer:

Question 15.
List out some human activities which altered the communities of plants and animals in their natural ecosystem.
Answer:

Question 21.
Geetha said “a given species may occupy more than one tropic level in the same ecosystem at the same time”. Do you support her or not? Explain your answer with example.
Answer:
I support her for the following reason.

Question 22.
If we introduce a man into a forest ecosystem, at which level of food chain we will place him? Explain your answer.
Answer: 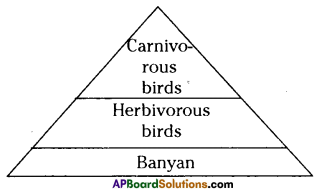 Question 26.
What is the role of decomposers in the ecosystem? (OR)
How decomposers help in cleaning the environment?
Answer:

Question 1.
Prepare some slogans about ‘Vanam – Manam’ programme to display in your school rally?
Answer:

Question 2.
Read the information about Kolleru lake in the given table and answer the following questions. 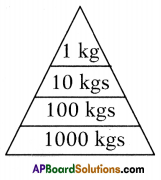 The pyramid of biomass for the given food chain, at each step 90% of the food is lost. That means 1000 kg of phytoplankton to produce 100 kg of Zooplankton to form 10 kg of fish to produce 1kg of human tissues. The fewer the steps in the food chain the more energy will be for the species at the top.

c) Where do producers get the energy from?
Answer:
From the sun.

i) Name the primary producers in the given food web.
ii) Prepare any one food – chain from the diagram.
iii) What are the tertiary consumers?
iv) Write names of any two herbivores.
Answer:
i) Plants, Grass, Trees Phytoplanktons etc.
ii) Grass → Rabbit → Fox → Tiger
iii) Tiger, Vulture, Crane, Owl, Peacock etc.
(OR)
The animals which are at 4th trophic level in a food chain are called as Tertiary Consumers.
iv) Rabbit, Deer, Goat, Cow

Question 5.
What is number pyramid? What does it indicate?
Answer:

Question 6.
Draw the diagram of number pyramid keeping foxes as third consumers. What are the consequences if their number increases?
Answer:

Question 7.
What reasons are responsible for decrease in number of top carnivores and biomass starting production in a food chain?
(OR)
Why the number of organisms get decreased as we move from producers to consumer levels?
Answer: 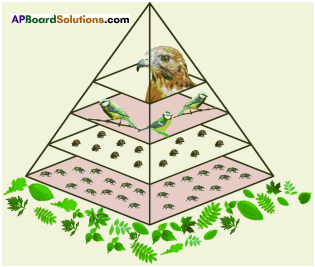 Question 9.
What determines the terrestrial ecosystems on the earth?
Answer:

Question 10.
“All the energy in the ecosystem is ultimately derived from sunlight.” Justify.
Answer:

Question 13.
Every organism has got the right to live on this planet. Write slogans to motivate the people on preservation of biodiversity.
Answer:

Question 14.
Write some friendly ecosystem activities you will conduct in your school.
Answer: