Question 2.
What is the apparatus used in your class, while performing the demonstration of peristaltic movement in Oesophagus?
Answer:
a) A piece of waste cycle tube.
b) Oil for lubrication.
c) Potatoes.

Question 3.
You have conducted an experiment to prove that HC1 secreted in our stomach, does not harm walls of the stomach. Write the apparatus used in that experiment.
Answer:
Apparatus: Green leaves, petroleum jelly, weak acid.

Question 4.
What will happen, if there is no diaphragm in the human body?
Answer:

Question 6.
What happens if there is no mucus in the Oesophagus?
Answer:

Question 8.
Name the chemical which is used to test the action of saliva on flour (ata).
Answer:
Iodine Solution.

Question 9.
What happens, if there is no peristaltic movement in Oesophagus?
Answer:

Question 22.
When do you identify the taste easily?
Answer:
Taste can be identified easily by me when the tongue is pressed against the pallate.

Question 26.
What is mastication?
Answer:
Grinding, chewing and shredding of food in the mouth by teeth is called mastication.

Question 28.
What is bolus?
Answer:
Food that is formed due to the mastication in the mouth is called bolus.

Question 29.
What is the function of salivary amylase?
Answer:
The enzyme salivary amylase in the saliva breaks down the large starch molecules into smaller subunits usually into sugars.

Question 34.
What are nocturnal animals? Give some examples.
Answer:
The animals which are active during nights are called Nocturnal animals.
Ex: Cockroach, rodents, bats etc.

Question 36.
What kind of tube is oesophagus?
Answer:
Oesophagus is muscular and elastic tube.

Question 37.
How does mucus help in passage of food?
Answer:
Mucus lubricates, protects the walls from damage and helps bolus slide down easily to stomach.

Question 39.
What is peristalsis?
Answer:
The involuntary contraction and relaxation of the muscles of oesophagus, stomach and intestine bring in a wave like motion called peristalsis.

Question 42.
What is chyme?
Answer:
The digestive juices turns the food into a smooth substance known as chyme. It is the partially digested food in the stomach.

Question 47.
What issthe location of pyloric sphincter? What is its function?
Answer:
Pyloric sphincter present at the opening of stomach and the first part of the small intestine. It releases small quantity of food into the duodenum.

Question 54.
Anyone with severe cough and cold cannot make out the difference in tastes of certain food items, when the sense of smell is impaired. Why?
Answer:

Question 56.
What is the second brain?
Answer:
The entric nervous system present below the gut or alimentary canal which controls digestion is called second brain.

Question 61.
What happens during exhalation?
Answer:
During exhalation, carbon dioxide from the blood moves into the alveoli of the lungs and breathed out.

Question 62.
What would be the path of salt removal from gut to the outside of our body?
Answer:
Salt is removed via blood through the kidneys, skin from our body.

Question 1.
The mere smell or sight of food stimulates hunger. Describe the process in a flow chart.
Answer: 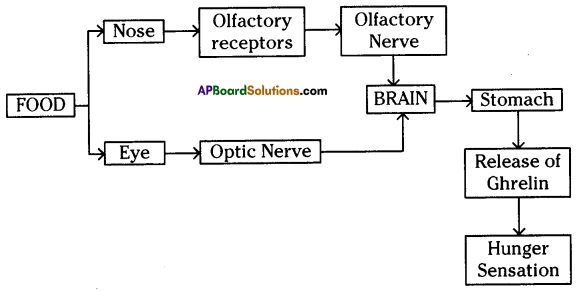 Question 2.
What happens if salivary ducts are closed?
Answer:

Question 4.
What will happen, if the small intestine is not like a long coiled tube?
Answer:

Question 5.
What did you observe in acid and leaf experiment ? What did you have understand regarding human digestive system from this? (OR)
Take two similar green leaves. Apply grease on one leaf and leave the other free. Add 1 or 2 drops of acid on each leaf. What kind of change do you observe from this?
Answer:

Question 6.
Identify the diagram and write two functions of it.

Question 7.
What will happen if Islets of langerhans fail to function?
Answer:

Question 8.
What may happen if villi are absent in small intestine?
Answer:

Question 9.
Draw the diagram showing peristaltic movement. Write the names of the parts responsible for it.
Answer:
a) Mucus lubricates and protects the walls of oesophagus. 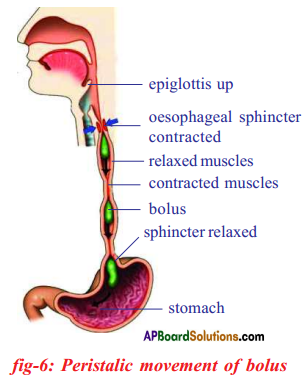 b) Circular muscles and longitudinal muscles of oesophagus help in the movement of food ‘bolus’.
c) Peristalsis is under the control of Autonomous nervous system.

Question 11.
Write a short note on digestion of food in mouth.
(OR)
How food is digested in the mouth?
Answer:

Question 12.
Why do we salivate during a nap of daytime?
Answer:

Question 13.
Write a brief account on travel of food through oesophagus.
(OR)
How food travels in the oesophagus?
Answer:

Question 15.
How taste is identified by us? (OR) How can we identify taste?
Answer:

Question 1.
Give reasons:
A) Hunger generating signals reach the brain when stomach gets empty.
Answer:
Ghrelin is secreted from walls of the stomach.
B) When your stomach is filled with full of food, you feel you don’t need food any more.
Answer:
Leptin Hormone is secreted which suppresses hunger.
C) In severe cold and cough, one cannot feel the taste of the food.
Answer:
During cold olfactory receptors are blocked.
D) We cannot identify the taste of a grape fruit, when it is placed on the tongue.
Answer:
We cannot taste the grapes because it is not in the liquid state.

i) What do you call the wave like movements shown by the muscles of Oesophagus?
Answer:
Peristalsis.

ii) What is the structure of Oesophagus?
Answer:
Long tube like structure.

iii) How does mucus help in passage of food?
Answer:
Mucus helps the food to slide down easily.

iv) Which parts of alimentary canal are connected by the Oesophagus?
Answer:
Pharynx and stomach.

Question 4.
What is peristaltic movement? Compare the similarity of bolus movement in oesophagus with cycle tube and potato experiment which you have conducted in school.
Answer:
Peristalsis: Contraction and relaxation of circular and longitudinal muscles bring in a wave – like motion that propels the food bolus into the stomach from oesophagus by the action called as peristalsis.
Experiment:
Aim: Making a model of oesophagus to observe how bolus moves forward.
Material required: Potatoes, cycle tube lubricate oil. 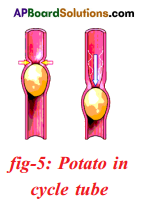 Observation: Oil acted as lubricant to push the potato easily in the forward direction. Conclusion: The muscles in the wall of the oesophagus have bring in a wave like movement due to contraction and relaxation, that propels the food bolus into the stomach.
This action is called as peristalsis.

Question 5.
Write the procedure involved in the acid and leaf experiment to understand the concept “how the stomach gets protected from its own acid secretions”. Compare the observations with the changes that takes place in human digestive system.
Answer:

Question 6.
Vasu is doing experiment, lab activities in his classroom. He is tired due to hungry. How hungry feeling occurs? How will one know?
Answer:

Question 8.
Write briefly about the functional and structural aspects of oesophagus in human beings.
Answer:

Question 9.
Explain briefly about the structure of stomach. (OR)
What is the role of stomach in digestion of food ?
Answer:

Question 12.
Write about the experiment conducted by Ivan Pavlov on conditioned reflex.
Answer:

Question 13.
Explain the process of exit of waste materials from large intestine.
Answer: