Question 8.
Microwaves are used in Radars, why ? (Mar. ’14)
Answer:
As microwaves are of smaller wavelengths, hence they can be transmitted as a beam signal in a particular direction. Microwaves do not bend around the comers of any obstacle coming in their path.

Velocity of E.M waves depends on

Question 1.
Give the brief history of discovery of knowledge of electromagnetic waves.
Answer:

Green house effect:
The temperature of the Earth increases due to radiation emitted by the Earth.is trapped by atmospheric gases like CO2, CH4, N2O, chlorofluoro carbons etc is called green house effect.

Question 1.
The figure shows a capacitor made of two circular plates each of radius 12cm, and separated by 5.0 cm. The capacitor is being charged by an external source (not shown in the figure). The charging current is constant and equal to 0.15A.
a) Calculate the capacitance and the rate of charge of potential difference between the plates.

Question 2.
A parallel plate capacitor in the figure made of circular plates each of radius R = 6.0 cm has a capacitance C = 100 pF. The capacitor is connected to a 230 V ac supply with a (angular) frequency of 300 rad s-1.
a) What is the rms value of the conduction current ?
b) Is the conduction current equal to the displacement current ?
c) Determine the amplitude of B at a point 3.0 cm from the axis between the plates. 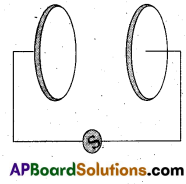 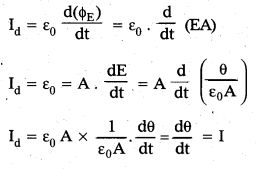 Temperature for other wavelengths can be similarly found. These numbers tell us the temperature ranges required for obtaining radiations in different parts of e.m spectrum. Thus to obtain visible radiation, say, λm = 5 × 10-5cm, the source should have a temperature
T = \(\frac{0.29}{5 \times 10^{-5}}\) = 6000 k
It is to be noted that, a body at lower temperature will also produce this wavelength but not with maximum intensity.

Question 4.
Given below are some famous numbers associated with electromagnetic radiations in different contexts in physics. State the part of the electromagnetic spectrum to which each belongs.
a) 21 cm (wavelength emitted by atomic hydrogen in interstellar space).
b) 1057 MHz (frequency of radiation arising from two close energy levels in hydrogen; known as Lamb shift).
c) 2.7 K [temperature associated with the isotropic radiation filling all space-thought to be a relic of the ‘big-bang’ origin of the universe].
d) 5890 A – 5896 A [double lines of sodium]
e) 14.4 keV [energy of a particular transition in 57Fe nucleus associated with a famous high resolution spectroscopic method (Mossbauer spectroscopy).
Answer:
a) This wavelength corresponds to radiowaves.

b) This frequency also corresponds to radiowaves.

d) This wavelength lies in the visible region of the electromagnetic spectrum.

Question 5.
Answer the following questions :
a) Long distance radio broadcasts use short-wave bands. Why ?
b) It is neccessary to use satellites for long distance TV transmission. Why ?
c) Optical and radio telescopes are built on the ground, but X-ray astronomy is possible only from satellites orbiting the earth. Why ?
d) The small ozone layer on top of the stratosphere is crucial for human survival. Why ?
e) If the earth did not have an atmosphere, would its average surface temperature be higher or lower than what it is now ?
f) Some scientists have predicted that a global nuclear war on the earth would be followed by a severe ‘nuclear winter’ with a devastating effect on life on earth. What might be the basis of this prediction ?
Answer:
a) It is so because ionosphere reflects the waves in these bands.

b) Yes, television signals being of high frequency are not reflected by ionosphere, Therefore to reflect them satellites are needed. That is why, satellites are used for long distance TV transmission.

d) The small ozone layer present on the top of the stratosphere absorbs most of ultraviolet radiations from the sun which are dangerous and cause genetic damage to living cells, prevents them from reaching the earth’s surface and thus helps in the survival of life.

e) The temperature of earth would be lower because the green house effect of atmosphere would be absent.

f) The clouds by a global nuclear war would perhaps cover most parts of sky preventing solar light from reaching many parts of globe. This would cause a winter.