Students get through AP Inter 2nd Year Physics Important Questions 8th Lesson Magnetism and Matter which are most likely to be asked in the exam.

Question 3.
What happens to the compass needles at the Earth’s poles ? [T.S. Mar. 17; IPE 2014]
Answer:
At the Earth poles, the magnetic field lines are converging or diverging,vertically so that the horizontal component is negligible. Hence, the compass needle can point along any direction.

Question 1.
Compare the properties of para, dia and ferromagnetic substances.
Answer:
Diamagnetic substances
a) When these materials placed in a magnetic field, they are magnetised feebly in the opposite direction to the applied external field.
b) When a rod of diamagnetic material is suspended freely in a uniform magnetic field, it comes to rest in the perpe-ndicular direction to the magnetic field.
c) When they are kept in a non-uniform magnetic field, they move from the region of greater field strength to the region of less field strength.
d) The relative permeability is less than 1. μr < 1 and negative.
e) The susceptibility (χ) is low and negative.
E.g.: Copper, Silver, Water, Gold, Antimony, Bismuth, Mercury, Quartz Diamond etc.

Paramagnetic substances
a) When these materials placed in a magnetic field, they are magnetised feebly in the direction of the applied magnetic field.
b) When a rod of paramagnetic material is suspended freely in a uniform magnetic field, it comes to rest in the direction of the applied magnetic field.
c) When they are kept in a non-uniform magnetic field„they move from the region of less field strength to the region of greater field strength.
d) The relative permeability is greater than 1. μr > 1 and positive.
e) The susceptibility (χ) is small and positive.
E.g.: Aluminium, Magnesium, Tungsten, Platinum, Mang-anese, liquid oxygen, Ferric chloride, Cupric chloride etc. 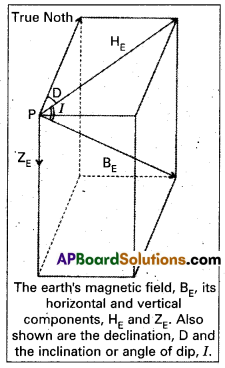 Qeustion 5.
What do you understand by “hysteresis” ? How does this propertry influence the choice of materials used in different appliances where electromagnets are used ?
Answer:

Qeustion 8.
A bar magnet, held horizontally, is set into angular oscillations in the Earth’s magnetic field. It has time periods T1 and T2 at two places, where the angles of dip are θ1 and θ2 respectively. Deduce an expression for the ratio of the resultant magnetic fields at the two places.
Answer:

Question 10.
What are ferromagnetic materials ? Give examples. What happens to a ferromagnetic material at curie temperature ? [IPE 2015 (TS)]
Answer:
Ferro magnetic substances : (a) These are strongly attracted by magnet, (b) Susceptibility is large, positive and temperature dependent, (c) Relative permeability, μr > > 1 (d) Atoms have permanent dipole moments which are organised in domains. Ex: Iron, Cobalt, Nickel 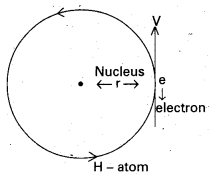 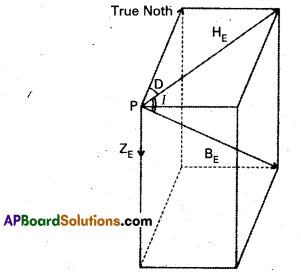 Qeustion 7.
What is the magnitude of the equatorial and axial fields due to a bar magnet of length 8.0 cm at a distance of 50 cm from its mid-point ? The magnetic moment of the bar magnet is 0.40 A m2.
Solution:
From Eq. 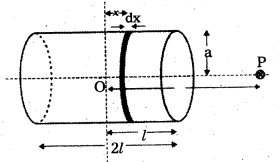 The axial field of a finite solenoid in order to demonstrate its similarity to that of a bar magnet.
From Eq. B =

Question 3.
a) What happens if a bar magnet is cut into two pieces :
(i) transverse to its length,
(ii) along its length ?
b) A magnetised needle in a uniform magnetic field experiences a torque but no net force. An iron nail near a bar magnet, however, experiences a force of attraction in addition to a torque. Why ?
c) Must every magnetic configuration have a north pole and a south pole ? What about the field due to a toroid ?
d) Two identical looking iron bars A and B are given, one of which is definitely known to be magnetised. (We do not know which one.) How would one ascertain whether or not both are magnetised ? If only one is magnetised how does one ascertain which one ? (Use nothing else but the bars A and B].
Solution:
a) In either case, one gets two magnets, each with a north and south pole.

b) No force if the field is uniform. The iron nail experiences a non-uniform field due to the bar magnet. There is induced magnetic moment in the nail, therefore, it experiences both force and torque. Then net force is attractive because the induced south pole (say) in the nail is closer to the north pole of magnet than induced north pole.

c) Not necessarily. True only if the source of the field has a net nonzero magnetic moment. This is not so for a toroid or even for a straight infinite conductor.

d) Try to bring different ends of the bars closer. A repulsive force in some situation establishes that both are magnetised. If it is always attractive, then one of them is not magnetised. In a bar magnet the intensity of the magnetic field is the strongest at the two ends (poles) and weakest at the central region. This fact may be used to determine whether A or B is the magnet. In this case, to see which one of the two bars is magnet, pick up one, (say, A) and lower one of its end first one of the ends of the other (say, B) and then on the middle of B. If you notice that in the middle of B, A experiences no force, then B is magnetised. If you do not notice any change from the end to the middle of B, then A is magnetised.

Question 4.
What is the magnitude of the equatorial and axial fields due to a bar magnet of length 8.0 cm at a distance of 50 cm from its mid-point ? The magnetic moment of the bar magnet is 0.40 A m2, the same as in Example – 2.
Solution:
From Eq. 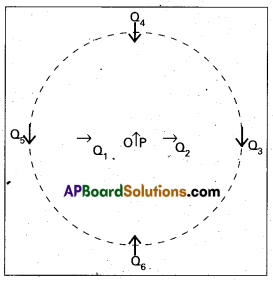 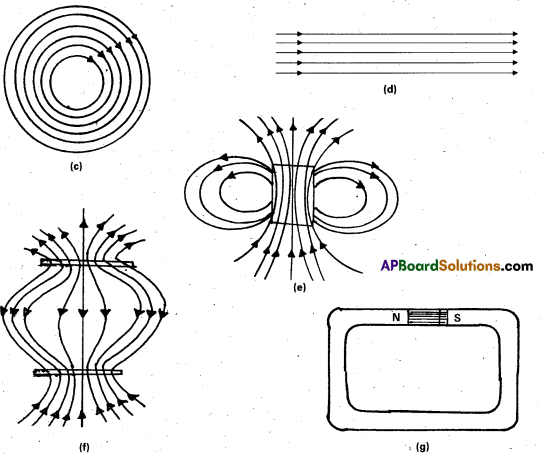 a) Wrong: Magnetic field lines can never emanate from a point, as shown in figure. Over any closed surface, the net flux of B must always be zero, i.e., pictorially as many field lines should seem to enter the surface as the number of lines leaving it. The field lines shown, in fact, represent electric field of a long positively charged wire. The correct magnetic field lines are circling the straight conductor.

c) Right: Magnetic lines are completely confined within a toroid: Nothing wrong here in field lines forming closed loops, since each loop encloses a region across which a current passes. Note, for clarity of figure, only a few field lines within the toroid have been shown. Actually, the entire region enclosed by the windings contains magnetic field.,

d) Wrong: Field lines due to a solenoid at its ends and outside cannot be so completely straight and confined; such a thing violates Ampere’s law. The lines should curve out at both ends, and meet eventually to form closed loops.

e) Right: These are field lines outside and inside a bar magnet. Note carefully the direction of field lines inside. Not all field lines emanate out of a north pole (or converge into a south pole). Around both the N-pole, and the S-pole, the next flux of the field is zero.

f) Wrong: These field lines cannot possibly represent a magnetic field. Look at the upper region. All the field lines seem to emanate out of the shaded plate. The net flux through a surface surrounding the shaded plate is not zero. This is impossible for a magnetic field. The given field lines, in fact, show the electrostatic field lines around a positively charged upper plate and a negatively charged lower plate. The difference between Fig. [(e) and (f)] should be carefully grasped.

g) Wrong: Magnetic field lines between two pole pieces cannot be precisely straight at the ends. Some fringing of lines is inevitable. Otherwise, Ampere’s law is violated. This is also true for electric field lines.

b) If field lines were entirely confined between two ends of a straight solenoid, the flux through the cross-section at each end would be non-zero. But the flux of field B through any closed surface must always be zero. For a toroid, this difficulty is absent because it has no ‘ends’.

c) Gauss’s law of magnetism states that the flux of,B thrugh any closed surface is always
zero \(\int_s B \cdot d s\) = o.
If monopoles existed, the right hand side would be equal to the monopole (magnetic charge) qm enclosed by S. [Analogous to Gauss’s law of electrostatics, \(\int_s B \cdot d s\) = μ0qm
where qm is the (monopole) magnetic charge enclosed by S.]

d) No. There is no force or torque on an element due to the field produced by that element itself. But there is a force (or torque) on an element of the same wire. (For the special case of a straight wire, this force is zero).

e) Yes. The average of the cahrge in the system may be zero. Yet, the mean of the magnetic moments due to various current loops may not be zero. We will come across such examples in connection with paramagnetic material where atoms have net dipole moment through their net charge is zero.

d) The magnetising current IM is the additional current that needs to be passed through the windings of the solenoid in the absence of the core which would give a B value as in the presence of the core. Thus B = μrn0 (I + IM). Using I = 2A, B = 1 T, we get IM = 794A.