Students get through AP Inter 2nd Year Physics Important Questions 1st Lesson Waves which are most likely to be asked in the exam.

Question 2.
What does a wave represent ?
Answer:
A wave represents the transport of energy through a medium from one point to another without translation of the medium.

Question 6.
Under what conditions will a wave be reflected ?
Answer:

Question 8.
What is a stationary or standing wave ?
Answer:
When two identical progressive (Transeverse or longitudinal) waves travelling opposite directions in a medium along the same straight line, which are superimposed then the resultant wave is called stationary waves or standing wave.

Question 16.
What are ‘beats’ ?
Answer:
Beats : When two sound notes of nearly frequency travelling in the same direction and interfere to produce waxing and waning of sound at regular intervals of time is called “Beats”.

Question 3.
What are ‘beats’ ? When do they occur ? Explain their use, if any.
Answer:
Two sound waves of nearly same frequency are travelling in the same direction and interfere to produce a regular waxing (maximum) and waning (minimum) in the intensity of the resultant sound waves at regular intervals of time is called beats.
It two vibrating bodies have slightly difference in frequencies, beats can occur.
No. of beats can be heard, ∆υ = υ1 ~ υ2
Importance:
1. It can be used to tune musical instruments.
2. Beats are used to detect dangerous gases.
Explanation for tuning musical instruments with beats:
Musicians use. the beat phenomenon in tuning their musical instruments. If an instrument is sounded against a standard frequency and tuned until the beats disappear. Then the instrument is in tune with the standard frequency.

Question 4.
What is ‘Doppler effect’ ? Give illustrative examples.
Answer:
Doppler effect: The apparent change in the frequency heard by the observer due to relative motion between .the observer and the source of sound is called doppler effect.
Examples:

Question 1.
Explain the formation of stationary waves in stretched strings and hence deduce the laws of transverse wave in stretched strings. [IPE]
Answer:
A string is a metal wire whose length is large when compared to its thickness. A stretched string is fixed at both ends, when it is plucked at mid point, two reflected waves of same amplitude and frequency at the ends are travelling in opposite direction and overlap along the length. Then the resultant waves are known as the standing waves (or) stationary waves. Let two transverse progressive waves of same amplitude a, wave length λ and frequency v, travelling in opposite direction be given by

Laws of Transverse Waves Along Stretched String:
Fundamental frequency of the vibrating string v = \(\frac{1}{2 l} \sqrt{\frac{\mathrm{T}}{\mu}}\)
First Law : When the tension (T) and linear density (μ) are constant, the fundamental frequency (v) of a vibrating string is inversely proportional to its length.
∴ v ∝ \(\frac{1}{l}\) ⇒ vl = constant, when ‘T’ and ‘μ’ are constant. .

Question 2.
Explain the formation of stationary waves in an air column enclosed in open pipe. Derive the equations for the frequencies of the harmonics produced. [A.P. 17; IPE 2015, 2016 (TS)]
Answer:
A pipe, which is opened at both ends is called open pipe. When a sound wave is sent through a open pipe, which gets reflected by the earth. Then incident and reflected waves are in same frequency, travelling in the opposite directions are super-imposed stationary waves are formed.

Harmonics in open pipe : To form the stationary wave in open pipe, which has two anti nodes at two ends of the pipe with a node between them. 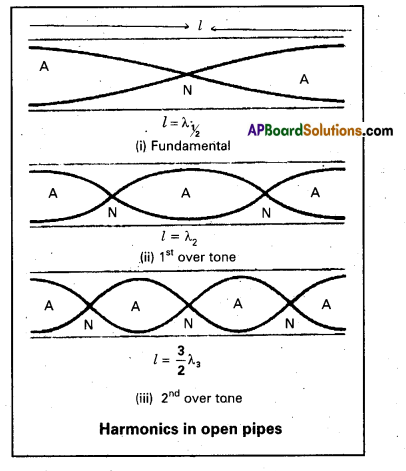 Question 3.
How are stationary waves formed in closed pipes ? Explain the various modes of vibrations and obtain relations for their frequencies. [IPE 2015, 2016(A.P.), (T.S) A.P. & T.S. Mar. 15]
Answer:
A pipe, which is closed at one end and the other is opened is called closed pipe. When a sound wave is sent through a closed pipe, which gets reflected at the closed end of the pipe. Then incident and reflected waves are in same frequency, travelling in the opposite directions are superimposed stationary waves are formed.

To form the stationary wave in closed pipe, which has atleast a node at closed end and antinode at open end of the pipe, it is known as first harmonic in closed pipe. Then length of the pipe (l) is equal to one fourth of the wave length. 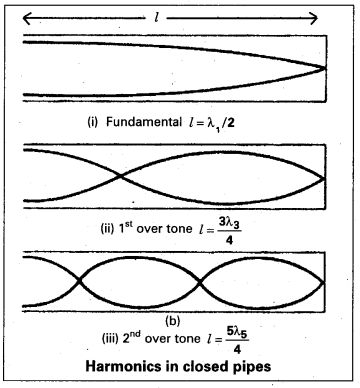 Question 4.
What is Doppler effect ? Obtain an expression for the apparent frequency of sound heard when the source is in motion with respect to an observer at rest. [Mar. 17, BMP, 2016 (AP) Mar. 14, (TS)]
Answer:
Doppier effect: The apparent change in the frequency heard by the observer due to the relative motion between the observer and the source of sound is called doppier effect. When a whistling railway engine approaches an observer standing on the platform, the frequency of sound appears to increase. When it moves away the frequency appear to decrease. 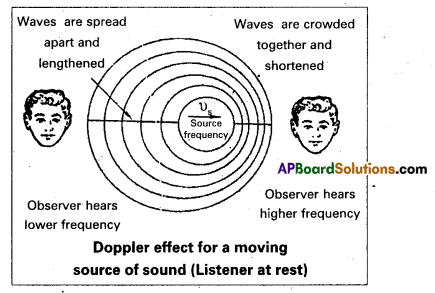 Limitation : Doppler effect is applicable when the velocities of the source and listener are much less than that of sound velocity. 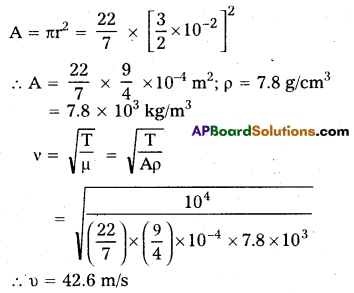 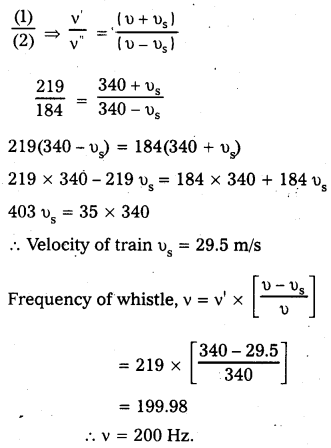 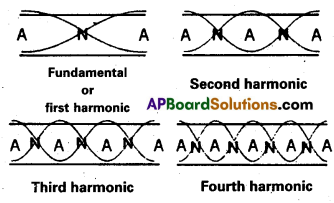 Clearly, for a source of frequency 1.1 kHz the air column will resonate at υ2, i.e. the second harmonic.
Now if one end of the pipe is closed (Fig.), the fundamental frequency is 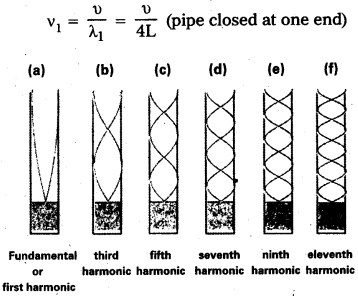