→ The word environment is derived from the French word environner which means to surround or to encircle.

→ Harmony between environment and economy.

→ The process of development which sustains,the human well being in future. 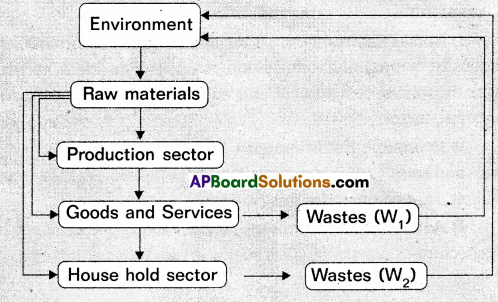 → Environment: The word environment is derived from French word environner which means to surround or encircle. Everything which surrounds us is collectively called as environment.

→ Greenhouse effect: It is a phenomenon in which the atmosphere of a planet traps radiation emitted by the sun caused by gases such as C02, water vapor and methane, that allow incoming sunlight to pass through but retain heat radiated back from the planet’s surface. It leads radiation climate changes etc.

→ Air Pollution : The excessive concentration of contaminated substance in the air which adversely affect the well being of the individuals, living organs and properly of all forms is called air pollution.

→ Water Pollution : It is defined as “the addition of some substance or factor which
degrades the quality of water, so that it becomes unfit for use”. The major pollutants that pollute water are, domestic wastes and sewage, slit etc. .

→ Ozone Layer : The Ozone layer is present in the stratosphere which is immediately above the troposphere at a height of 12 k.m from the earth. It is 40 k.m thick layer. Ozone absorbs the dangerous ultra violet rays from the sun and protects life on earth from death. .

→ Global Warming : Global warming is the increase of Earth’s average surface temperature due to the effects of green house gases such as carbon dioxide emissions from burning fossil fuels or from deforestation, which trap heat that would otherwise escape from earth.

→ Sustainable Development: The process of development which sustains the human well being in future also.

→ Cost – benefit analysis of environment : Evaluation and comparison of capital and environmental costs of a project to estimate its relative merits and demerits. Every economic activity consists of both benefits as well as costs.