Question 1.
Arrange the following compounds in increasing order of their property indicated.

Question 2.
Write the reaction showing a-halogenation of carboxylic acid and give its name.
Answer:
Carboxylic acids having a-hydrogens are halogenated at the a-position on treatment with chlorine or bromine in presence of small amount of red phosphorous to give a-halo carboxylic acids.
This reaction is named as Hell-volhard – Zelinsky (HvZ) reactions

Question 3.
Although phenoxide ion has more number of resonating structures thancarboxylate ion carboxylic acid is a stronger acid than phenol. Why ?
Answer:

Question 4.
How do you distinguish acetophenone and benzophenone?
Answer:
On idoform test Acetophenone gives positive, where as benzophenone (C6H5COC6H5) does not

Question 6.
Write equations showing the conversion of
i) Acetic acid to Acetyl chloride
ii) Benzoic acid to Benzamide
Answer:
i) acetic acid reacts with PCl3 (or) PCl5 (or) SOCl6 to form acetyl chloride

Question 9.
Write the mechanism of esterification.
Answer:
Mechanism of esterification of carboxylic acids : The esterification of carboxylic acids with alcohols is a kind of nucleophilic acyl substitution. Protonation of the carbonyl oxygen activates the carbonyl group towards nucleophilic addition of the alcohol. Proton transfer in the tetrahedral intermediate converts the hydroxyl group into – +OH2 group, which, being a better leaving group, is eliminated as neutral water molecule. The protonated ester so formed finally loses a proton to give the ester. 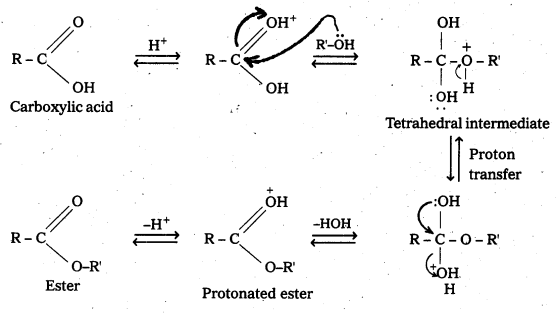 Question 3.
Write the oxidation products of : Acetaldehyc, Acetone and Acetophenone.
Answer:
a) Acetaldehyde under goes oxidation to foim acetic acid.

which is a source of electron density so electrophiles add no to C = C to give addition products. Hence alkenes undergo electrophilic addition reaction.

If both the reactants contain α-hydrogen atoms, it gives a mixture of four products. 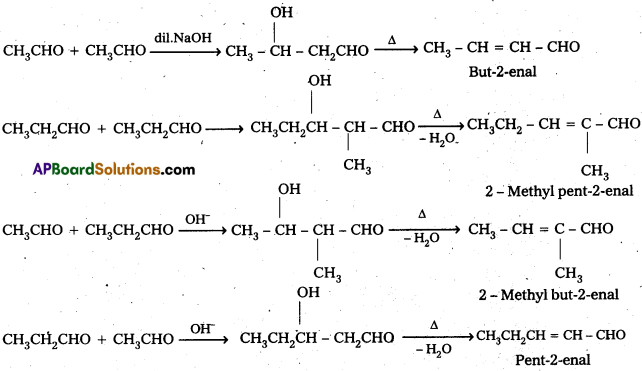 ii) Decarboxylatlon : Carboxylic acids lose carbon dioxide molecule to produce hydrocarbons on heating their sodium salts with sodalizne (a mixutre of NaOH & CaO in ratio 3 : 1)
.-, This reaction is called decarboxylation

Question 8.
ExplaIn the role of electron withdrawing and electron releasing groups on the acidity of carboxylic acids.
Answer:

Question 10.
An organic compound contains 69.77% carbon, 11.63% hydrogen and rest oxygen. The molecular mass of the compound is 86. It doesnot reduce Tollens’ reagent but forms sodium hydrogensulphite adduct and gives +ve iodoform test. On vigorous oxidation forms ethanoic and propanoic acids. Write the possible structure of the compound.
Answer:
Step : 1 To determine the molecular formula of the compound. 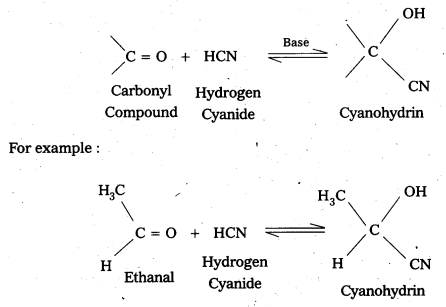 ii) Acetal
In the presence of dry HCl gas, an aldehyde reacts with two equivalents of a monohydric alchol forms gem-dialkoxy compounds are known as acetals.
—> In acetal two alkoxy groups are present on the terminal C-atom. 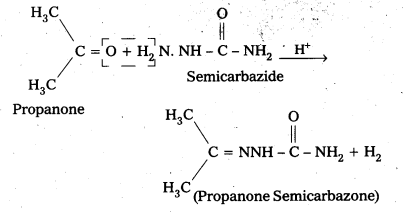 iv) Aldol
When an aldehyde ((or) ketone) having at least one a-hydrogen atom undergo a reaction in the presence of dilute alkali as catalyst to form aldol (or) β- hydroxy aldehydes ((or) ketals in case of ketones), the reaction is called aldol condensation.
For example:

v) Hemiacetat : In the presence of dry HCl gas an aldehyde reacts with one molecule of a monohydric alcohol forms gem-alkoxy alcohols. These are known as hemiacetals.
For example:

vi) Oxime: In weak acidic medium, an aldehyde ketone reacts with hydroxylamine forms products which are known as oxims. 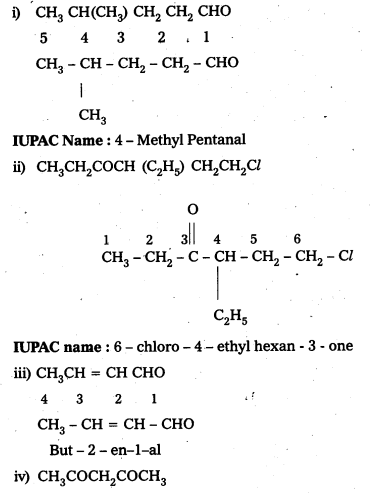 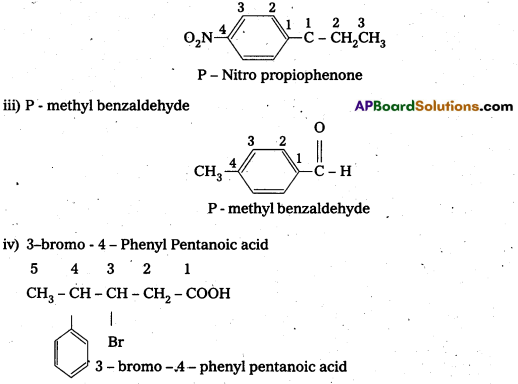 iv) The Semicarbazone of cyclobutanone 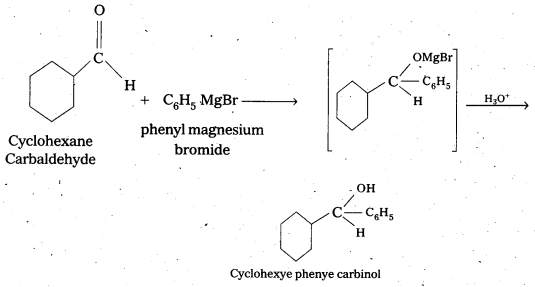 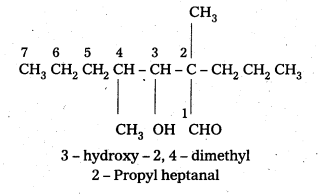 Question 9.
How do you distinguish the following pairs of compounds ?
i) Propanal and propanone
ii) Acetophenone and benzophenone
iii) Phenol and benzoic acid
iv) Pentan-2-one and Pentan-3-one
Answer:
i) Propanal and Propanone
On idoform test propanone responds, but absence of CH3CO – group in propanal (CH3CH2CHO) it does not respond. 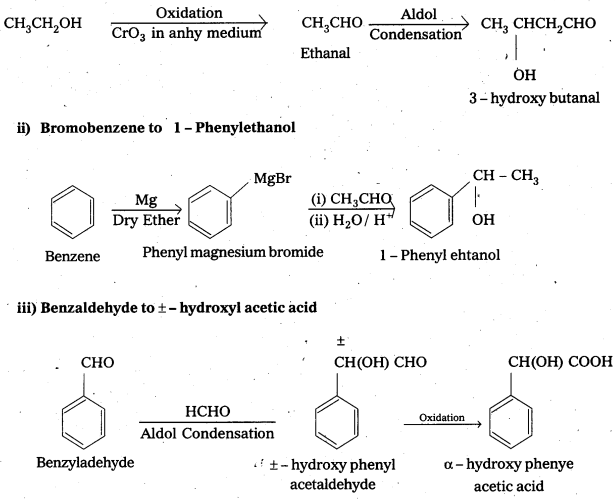 Reagents used are acid chloride (or) acid anhydride in presence of a base like pyridine (or) dimethylaniline.
For example :

ii) Cannizaro reaction: On treating with concentrated alkali, aldehydes which do not have any α – hydrogen atom, undergo self oxidation and reduction (disproportionation) reaction.
This reaction is called cannizaro reaction.

As a result, one molecule of aldehyde is reduced to alcohol while another is oxidised to carboxylic acid salt.
For example:

If both the reactants contain a – hydrogen atoms, it gives a mixture of four products. 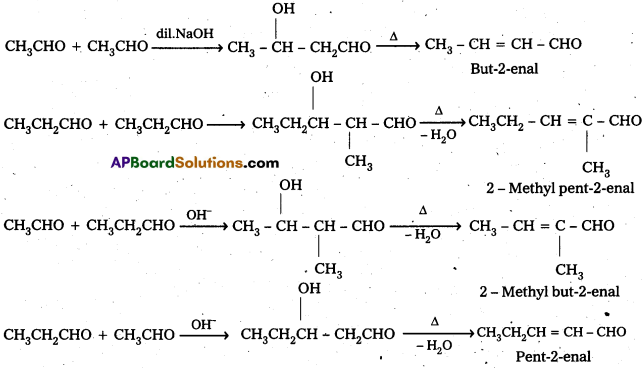 iv) Decarboxylation
Carboxylic acids lose carbon dioxide molecule to produce hydrocarbons on heating their sodium salts with sodalime (a mixutre of NaOH & CaO in ratio 3: 1). This reaction is called decarboxylation.

Question 12.
Complete each synthesis by giving the missing starting material, reagent or product. 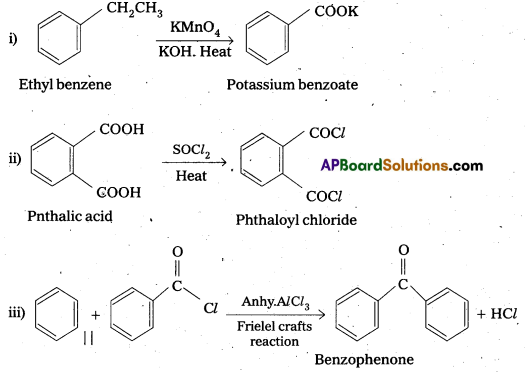 Question 13.
Explain how methyl ketones are distinguished from other ketones. Write the equations showing it.
Answer:
Oxidation of methyl ketones by haloform reactIon : Aldehydes and ketones having at least one methyl group linked to the carbonyl carbon atom (methyl ketones) are oxidisedby sodium hypohalite to sodium salts of corresponding carboxylic acids having one carbon atom less than that of carbonyl compound. The methyl group is converted to haloform. This oxidation does not affect a carbon-carbon double bond, If present in the molecule. lodoform reaction with sodium hypoiodite is also used for detection of CH3CO group or CH3CH(OH) group which produces CH3CO group on oxidation. 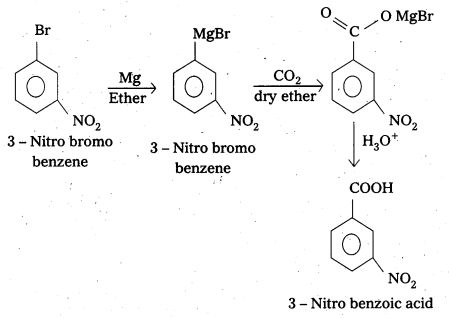 Question 1.
Give names of the reagents ot bring about the following transformations:

Question 2.
Arrange the following compounds in the increasing order of their boiling points:
CH3CH2CH2CHO, CH3CH2CH2CH2OH, H5C2-O-C2H5, CH3CH2CH2CH2CH3
Solution:
The molecular masses of these compounds are in the range of 72 to 74. Since only butan-1- ol molecules are associated due to extensive intermolecular hydrogen bonding, therefore, the boiling point of butan-l-ol would be the highest. Butanal is more polar than ethoxyethane. Therefore, the intermolecular dipole-dipole attraction is stronger in the former. n-Pentane molecules have only weak vander Waals forces. Hence increasing order of boiling points of the given compounds is as follows :
CH3CH2CH2CH2CH3 < H5C2-O-C2H5 < CH3CH2CH2CHO < CH3CH2CH2CH2OH

Question 4.
An organic compound (A) with molecular formula C8H8O forms an orange-red precipitate with 2,4 – DNP reagent and gives yellow precipitate on heating with iodine in the presence of sodium hydroxide. It neither reduces Tollens or Fehlings reagent, nor does it decolourise bromine water or Baeyer’s reagent. On drastic oxidation with chromic acid, it gives a carboxylic acid (B) having molecular formula C7H6O2. Identify the compounds (A) and (B) and explain the reactions involved.
Solution:
(A) forms 2, 4 – DNP derivative. Therefore, it is an aldehyde or a ketone. Since it does not reduce Tollens or Fehling’s reagent, (A) must be a ketone. (A) responds to iodoform test. Therefore, it should be a methyl ketone. The molecular formula of (A) indicates high degree of unsaturation, yet it does not decolourise bromine water or Baeyers reagent. This indicates the presence of unsaturation due to an aromatic, ring. 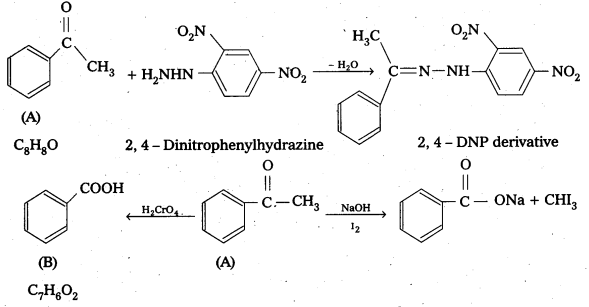 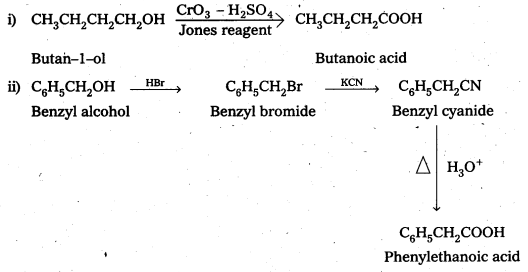 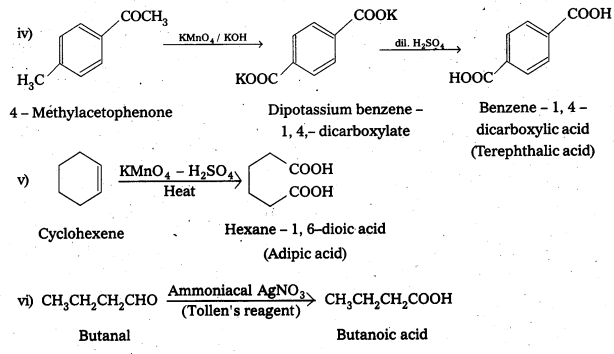 Question 1.
Classify the following as primary, secondary and tertiary alcohols:

Question 3.
Name of the following compounds according to IUPAC system. 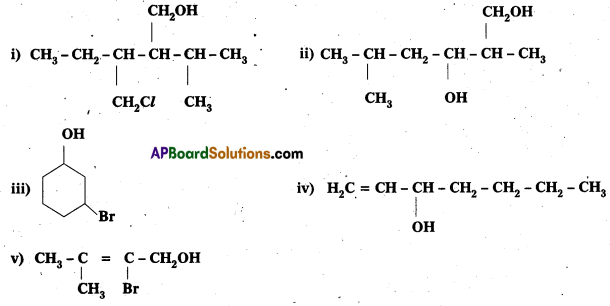 Question 4.
Show how are the following alcohols prepared by the reaction of a suitable Grignard reagent on methanal ?

Question 5.
Write the structures of the products of the following reactions :

Question 7.
Write the reactions of Williamson synthesis of 2-ethyoxy-3-methylpentane starting from ethanol and 3-methylpentan-2-ol.
Solution:

Question 8.
Which of the following Is an appropriate set of reactants for the preparation of 1 – methoxy-4-nltrobenzene?

Question 9.
Predict the products of the following reactions:

Question 11.
Write the structures of products of the following reactions; 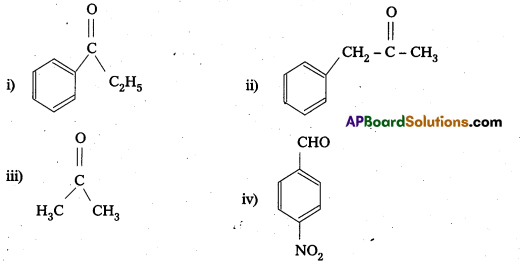 Question 13.
Arrange the following compounds in increasing order of their reactivity in nucleophilic addition reactions.

Question 14.
Predict the products of the following reactions : 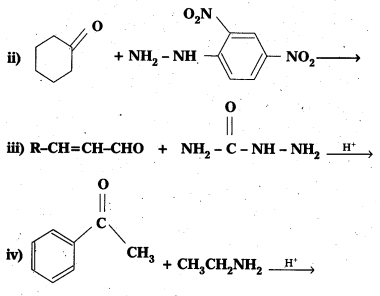 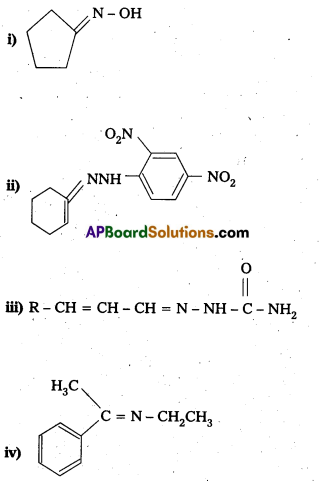 Question 15.
Give the IUPAC names of the following compounds:
i) Ph CH2CH2COOH
ii) (CH3)2C = CHCOOH

Question 16.
Show how each of the following compounds can be converted to benzoic acid.
i) Ethylbenzene
ii) Acetophenone
iii) Bromobenzene
iv) Phenylethene (Styrene)
Solution: 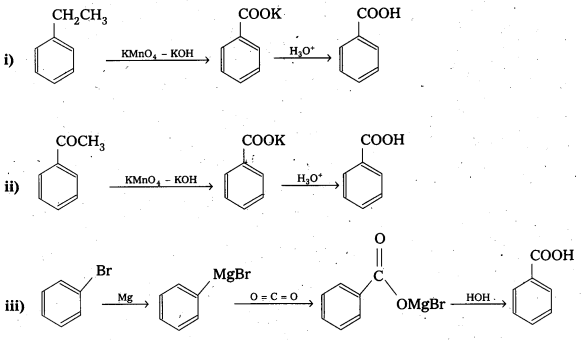 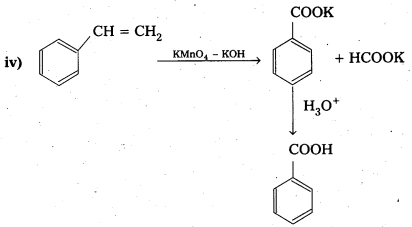