→ Carbohydrates : The compounds which are primarily produced by plants and form a very large group of naturally occuring organic compounds are called Carbohydrates.
Eg : Glucose, Fructose, Starch.
Carbohydrates are the polyhydroxy aldehydes (or) ketones.

→ A carbohydrate which donot form any saccharide unit on hydrolysis (or) which cannot be hydrolysed is called monosaccharide.
Eg : Glucose, Fructose.

→ When the poly peptide chains run parallel and are held together by hydrogen and disulphide bonds then fibre – like structure is formed. These are called fibrous proteins. These are insoluble in water.
Eg : Keratin, Myosin

→ When the chains of polypeptides coil around to give a spherical shape then globular proteins are formed. These are usually soluble in water.
Eg : insulin and albumins.

linkages between amino acids are known as peptide linkages.

→ Vitamin is defined as an “accessory food factor which is essential for growth and healthy maintenance of the body”. 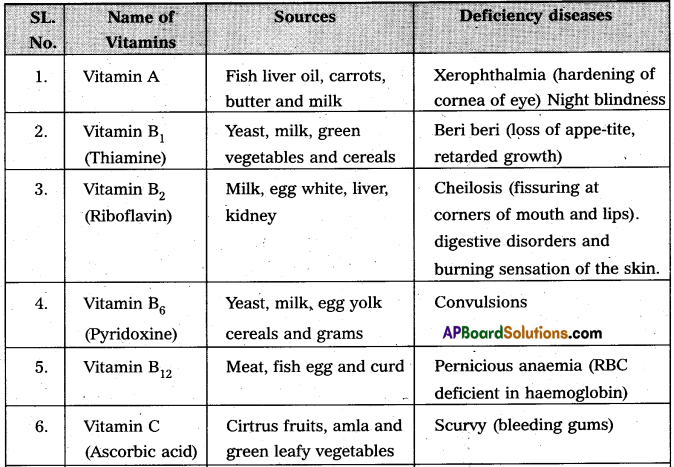 → Hormone is defined as an “organic compound synthesised by the ductless glands of the body and carried by the blood stream to another part of the body for its function”.