Students get through AP Inter 2nd Year Chemistry Important Questions 9th Lesson Biomolecules which are most likely to be asked in the exam.

Question 3.
How is Glucose prepared ? [IPE – 2014]
Answer:
Glucose is prepared by the hydrolysis of starch in presence of a little acid.

Question 4.
Why are sugars classified as reducing and non-reducing sugars ?
Answer:

Question 5.
What do you understand by invert sugars ?
Answer:
During the hydrolysis of sucrose there is a change in the sign of rotation, from dextro (+) to laevo (-) and the product is named as invert sugar.

Question 7.
What is zwitter ion ? Give an example. [IPE 2015 (AP)]
Answer:
Zwitter ion: In aqueous solution of amino acids, the carboxyl group can lose a proton and amino acid can accept that proton to form a dipolar ion. This ion is called as zwitter ion.

Question 9.
What are proteins ? Give an example.
Answer:
Proteins : A poly peptide with more than hundred amino acid residues, having molecular mass higher than 10,000 units is called a protein.
Eg : keratin, myosin, insulin.

Question 10.
What are the components of a nucleic acid ?
Answer:

Question 15.
What are anomers ?
Answer:
Anomers : The two isomeric structures of a compound which differ in configuratiofi at C-l only are called Anomers.

Question 17.
What are fibrous proteins ? Give examples.
Answer:
When the poly peptide chains run parallel and are held together by hydrogen and disulphide bonds then fibre – like structure is formed. These are called fibrous proteins. These are insoluble in water.
Eg : keratin, myosin.

Question 18.
What are globular proteins ? Give examples.
Answer:
When the chains of polypeptides coil around to give a spherical shape then globular proteins are formed. These are usually soluble in water.
Eg : insulin and albumins.

Question 2.
What are enzymes ? Give examples ?
Answer:
The group of complex proteinoid organic compounds, elaborated by living organism which catalyse specific organic reactions are called enzymes.
Eg.: Lipases, Rennin, Maltase, Invertase etc. Practically all biological processes such as digestion, respiration etc., are carried on through the agency of enzymes.
Enzymes may be defined as biocatalysts synthesised by living cells.
The functional unit of enzyme is known as holo enzyme made up at apo enzyme (protein part) and co enzyme (non-protein part).

Question 3.
Write notes on vitamins.
Answer:
Vitamin is defined as an “accessory food factor which is essential for growth and healthy maintenance of the body.”
Classification : Vitamins are broadly classified into two major groups.
a) the fat soluble Eg : vitamin A, D, E and K.
b) water soluble Eg : vitamin B – complex and C. 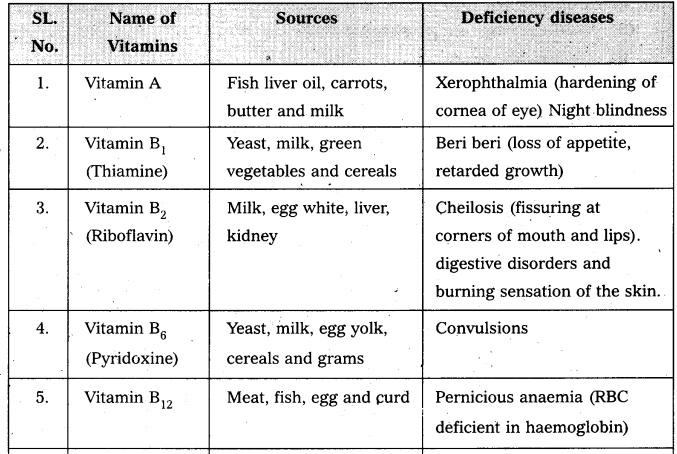 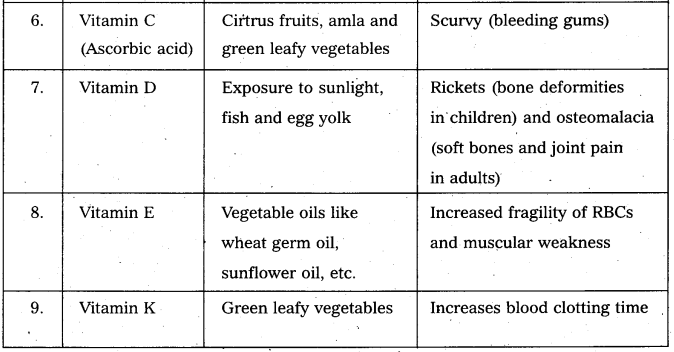 Answer:
Hormones: Hormone is defined as an “organic compound synthesised by the ductless glands of the body and carried by the blood stream to another part of the body for its function”.
Eg : testosterone, oestrogen.

Question 7.
Write notes on proteins. [IPE – 2016 (TS)]
Answer:
Proteins are polypeptide chains of amino acids.
Classification of Proteins : Proteins can be classified into two types on the basis of their molecular shape.
a) Fibrous Proteins : These are fibre like proteins, the polypeptide chains are parallel which are held together by hydrogen and disulphide bonds. These are insoluble in water.
Ex : Keratin present in hair, wool, silk etc., and myosin present in muscles.

b) Globular proteins: In these proteins, the polypeptide chains coil around to give a spherical shape. These are soluble in water.
Ex : insulin and albumin.

Question 9.
Write notes on the functions of different hormones in the body. [IPE 2014]
Answer:
Functions of Hormones:

Question 10.
Write the sources of vitamin and diseases due to vitamin deficIency. [AP Mar. 20]
Answer: 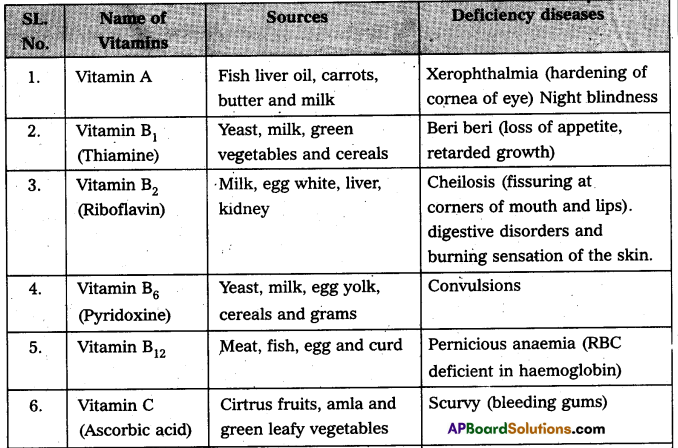