Students get through AP Inter 2nd Year Chemistry Important Questions 1st Lesson Solid State which are most likely to be asked in the exam.

Question 8.
Why X – rays are needed to probe the crystal structure ?
Answer:
According to the principles of optics, the wavelength of light used to observe an object must be no greater than the twice the length of the object itself. It is impossible to see atom s using even the finest optical microscope. To see the atoms we must use light with a wavelength of approximately 10-10 m. X – rays are present with in this region of electromagnetic spectrum. So X – rays are used to probe crystal structure.

Question 10.
Explain Ferrimagnetisms with suitable example.
Answer:
Ferrimagnetism is observed when the magnetic moments of the domains in the substance are aligned in parallel and anti parallel directions in unequal numbers.

Question 11.
Explain Antiferromagnetism with suitable example.
Answer:
Substances like Mno showing anti-ferromagnetism having domain structure similar to ferromagnetic substance, but their domains are oppositely oriented and cancel out each others magnetic moment.

Question 14.
What are n-type semiconductors ?
Answer:
Silicon and Germanium belong to IVA group and have four valence electrons. When these elements are doped with VA group like P or As which have 5 valence electrons some of lattice sites of Si are replaced by VA group element. Each VA group element forms four bonds with four Si atoms and fifth electron is extra and becomes delocalised. These delocalised electrons increase the conductivity. The increase in conductivity is due to negatively charged electrons. Hence it is called n – type semi conductor.

Question 15.
What are p-type semi conductors ?
Answer:
Silicon and Germaium when doped with IIIA group elements like B or Al which have only 3 valence electrons. These electrons are bonded to three silicon atoms and fourth valence electron place is vacant. It is called hole. Under the influence of electric field, electrons move towards positive electrode through holes. Hence this type of semi-conductors are called p – type semi conductors. 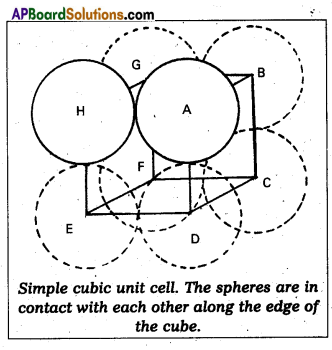 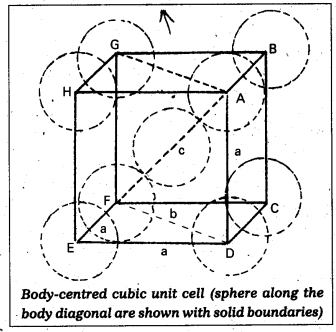 Question 3.
Describe the two main types of semiconductors and contrast their conduction mechanism.
Answer:
The solids which are having moderate conductivity between insulators and conductors are called semi conductors.

Extrinsic semi-conductors are of two types.
a) n-type semi-conductors : It is obtained by adding trace amount of V group element (P, As, Sb) to pure Si or Ge by doping.
When P, As, Sb (or) Bi is added to Si or Ge, some of the Si or Ge in the crystal are replaced by P or As atoms and four out of five electrons of P or As atom will be used for bonding with Si or Ge atoms while the fifth electron serve to conduct electricity.

b) p-type semi-conductors : It is obtained by doping with impurity atoms containing less electrons i.e., Ill group elements (B, Ai, Ga or In).
When B or AZ is added to pure Si or Ge, some of the Si or Ge in the crystal are replaced by B or AZ atoms and four out of three electrons of. B or AZ atom will be used for bonding with “Si” or Ge atoms while the fourth valence electron is missing is called electron hole (or) electron vacancy. This vacancy on an atom in the structure migrates from one atom to another. Hence it facilitates the electrical conductivity. 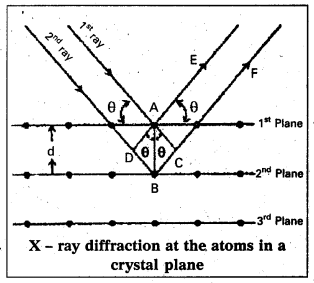 The 1st and 2nd waves reach the crystal surface. They undergo constructive interference. Then from the figure 1st and 2nd rays are parallel waves. So, they travel the same distance till the wave form AD. The second ray travels more than the first by an extra distance (DB + BC) after crossing the grating for it to interfere with the first ray in a constructive manner. Then only they can be in the same phase with one another. If the two waves are to be in phase, the path difference between the two ways must be equal to the wavelength (X) or integral multiple of it (nλ, where n = 1, 2, 3, ………..)
(i.e.,) nλ = (DB + BC) [where n = order of diffraction]
DB = BC = d sin θ [θ = angle of incident beam,]
(DB + BC) = 2d sin θ [d = distance between the planes]
nλ = 2d sin θ
This relation is known as Bragg’s equation.