Question 1.
What is the cross between the F1 Progeny and the Homozygous recessive parent called? How is it useful?
Answer:
Test cross. It is used to test whether an Individual is Homozygous (pure) or Heterozygous (Hybrid).

Question 4.
Define true breeding. Mention its significance.
Answer:
All offsprings has the same phenotype as its parents is called the breeding. They express characters for several generations.

Question 5.
Explain the terms Phenotype and Genotype.
Answer:
The Physical or external appearance of a character is called Phenotype. The genetic makeup of an individual is called Genotype.

Question 6.
What is point mutation? Give an example.
Answer:
Mutation which occurs in a single base pair of DNA is called point mutation.
E.g.: Sickle cell anemia.

Question 8.
What will be the phenotypic ratio in the offsprings obtained from the following crosses.
a) Aa x aa b) AA x aa c) Aa x Aa d) Aa x AA
Note : Gene A is dominant over gene a.
Answer:

Question 9.
In garden pea, the gene T for tall is dominant over its allele for dwarf. Give the genotypes of the parents in the following crosses.
a) Tall x Dwarf producing all tall plants.
b) tall x tall producing 3 tall and 1 dwarf plants.
Answer: 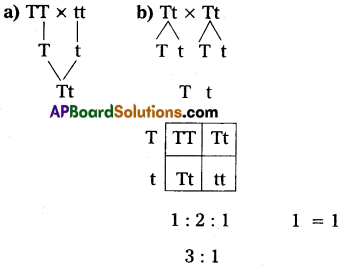 Question 1.
Mention the advantages of selecting pea plant for experiment by Mendel.
Answer:

Question 2.
Differentiate between the following.
a) Dominant and Recessive b) Homozygous and Heterozygous
Answer:

Question 3.
Explain the law of Dominance using a Monohybrid cross.
Answer:
Characters are controlled by discrete units called factors. Factors occur in pairs. In a dissimilar pair of factors pertaining to a character one number of the pair dominates the other. The law of Dominance is used to explain the expression of only one of the parental characters in a Monohybrid cross in the F1 generation and the expression of both in F2 generation in the ratio of 3 : 1. 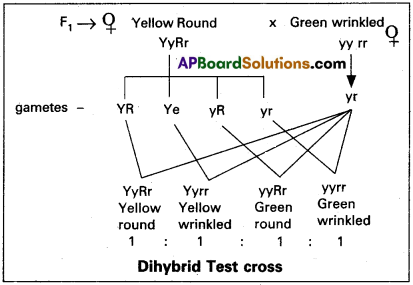 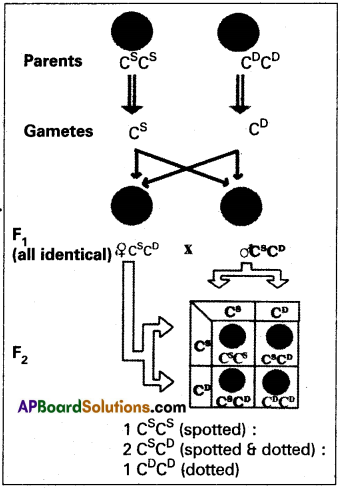 a) Co-dominance:
The phenomenon where heterozygotes have features of both the homozygotes, that is, an allele is neither dominant nor recessive to the other. 1) Different types of red blood cells that determine ABO blood grouping in humans 2) Seed coat pattern size in lentil plants. A cross between pure breeding spotted lentils with pure breeding dotted lentils produce heterozygotes. These Fx hybrids show the phenotypic features of both parents which means that neither the spotted nor the dotted, allele is dominant or recessive to the other. Because both traits show up equally in the heterozygote’s phenotype, the alleles are termed co-dominant. F1 plants are self pollinated produce F2 progeny in the ratio of (lspotted : 2 spotted and dotted : 1 dotted). 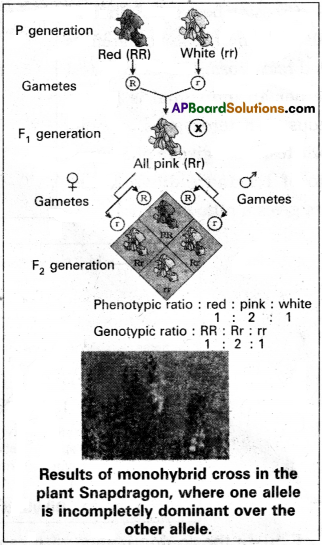 Incomplete Dominance: It is the condition where one allele of a gene is not completely dominant over the other allele and results in the heterozygous having phenotype different from the dominant and recessive homozygotes.

Here the genotype ratios were as in monohybrid cross of Mendel but the phenotypic ratio had changed from the 3 : 1 because, R was not completely dominant over r and is possible to distinguish Rr as pink from RR and rr. Thus the phenotypic and genotypic ratios in F2 progeny are the same, that is 1 : 2 : 1.

b) Gene Mutations :
Mutations which occur due to change in a single base pair of DNA are called gene mutations or point mutations.

Question 8.
Define Law of Segregation and Law of Independent Assortment.
Answer:
Law of segregation :
The two alleles of a gene when present together in a heterozygous state, they do not fuse or blend in any way but remain distinct and segregate during meiosis or in the formation of gametes, so that each meiotic product of gamete will carry only one of them.

Question 1.
Explain the dihybrid cross with the help of punnel square board by taking contrasting traits, seed colour and seed shape.
Answer:
The cross made between individuals differing in two characters is known as Dihybrid cross. Mendel studied the inheritance of two characters at a time. Mendel crossed a homozygous pea plant having yellow and round seeds with another pea plant having green and wrinkled seeds. The F1 hybrids were found to have yellow and round seeds. This shows that are dominant.

When F1 plants allowed to cross among themselves, four distinct types of seeds appeared in F2 generation. Two of these were similar to parental combinations, while the other two were new combinations. The phenotypic ratio of 9 : 3 : 3 : 1 can be derived as a combination series of 9 round yellow, 3 round green, 3 wrinkled yellow, 1 wrinkled green. 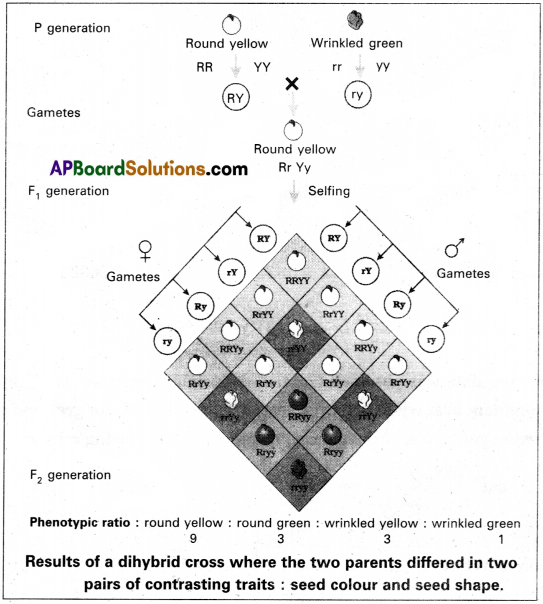 Question 1.
Mendel crossed pea plants producing round seeds with those producing wrinkled seeds. From a total of 7324 F2 seeds, 5474 were round and 1850 were wrinkled. Using the symbols R and r for genes, predict the a) the parental (p) genetypes, b) the gametes, c) F1 progeny, d) the cross between F1 hybrids, e) genotypes, phenotypes, genotypic frequency, phenotypic ratio of F2 progeny.
Answer:
a)

Question 2.
The following data was obtained from an experiment on peas. The grey coloured seed is dominant over white coloured seed. Use the Letter G for grey and g for white traits. Predict genotypes of the parents in each of the following crosses. 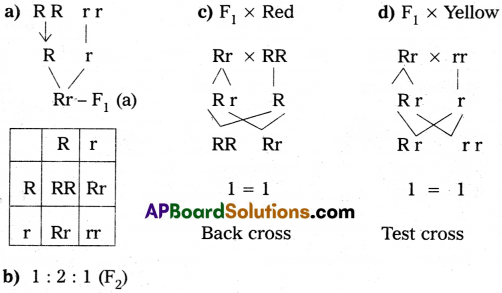 Question 4.
In pea, axillary position of flowers T is dominant over its terminal position (t). Coloured flowers (C) are dominant to white flowers (c). A true breeding plant with coloured flowers in axils is crossed to one with white terminal flowers. Give the phenotypes, genotypes and expected ratios of F1, F2 back cross and test cross progenies. What genotype ratio is expected in the F2 progeny?
Answer:

Question 7.
A diploid organism is heterozygous for 4 loci. How many types of gametes can it produce?
Answer:
Locus is a fixed position on a chromosome which is occupied by a single or more genes. A diploid organisms which is heterozygous at four loci, will have over different contratling characters at four different loci. For example the organisms have Aa, Bb, Cc, Dd then during meiosis, it will seggregate to form 8 separate gametes.

If the genes are not linked, then the diploid organism will produce 16 different gametes. However if the genes are linked, the gametes will reduce their number as the genes might be linked and the linked genes will be inherited togethers during the process of meiosis.

Question 8.
What is crossing over? In which stage of cell division crossing over occurs? What is its significance?
Answer:
Exchange of chromatid segments between two homologous chromosomes is called crossing over. It ccurs in pachytene sub stage of meiosis. It leads to the evolution of new genetic recombinations.

Question 9.
“Genes contain the information that is required to express a particular trait”. Explain.
Answer:
Genes are the functional segments of DNA, which is a part of chromosome, controls traits. If proteins work efficiently then trait get expressed in a better way, height depends on the release of growth hormones by proteins. Thus through proteins present in genes, genes controls the traits.

Question 10.
For the expression of traits, genes provide only the potentiality and the environment provides the opportunity. Comment on the varaeity of the statement.
Answer:
Phenotype = Genotype + Environment
Trait = (Potentiality) (Opportunity)

Question 11.
Two heterozygolis parents are crossed. If the two loci are linked what would be the distribution of phenotypic features in F1 generation for a dihybrid cross?
Answer: 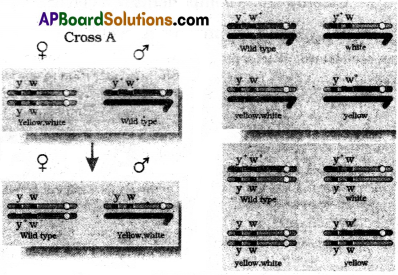 Question 12.
In peas, tallness is dominant over dwarfness and violet colour of flowers is dominant over the white colour. When a tall plant bearing violet flowers was pollinated with a dwarf plant bearing white flowers, different phenotypic groups were obtained in the progeny in numbers mentioned against them.
Tall, violet = 138
Tall, white = 132
Dwarf, violet = 136
Dwarf, white = 128
Mention the genotypes of the two parents and of the four offsprings.
Answer:
Tall plant violet flowers
Dwarf plant white flowers
Test cross: 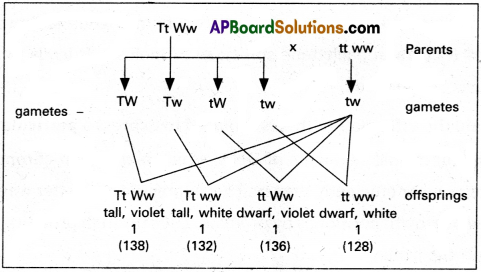 Question 13.
How do genes and chromosomes share similarities from the view point of genetical studies?
Answer:
The genes are located on chromosomes so therefore they both contain genetic information.

Gene :
A gene is an ordered sequence of nucleotides located in a particular position on a particular chromosome that encodes a specific functional product.

Chromosome components in a cell that contain genetic information. Each chromosome contains genes. Chromosomes occur in pairs, one from mother and one from father.