Question 1.
Define plasticity. Give an example.
Answer:
Ability of plants to follow different pathways in response to the environment or phases of life to form different kinds of structures in called plasticity.
Ex : Heterophily.

Question 2.
What is the disease that formed the basis for the identification of gibberellins in plants? Name the causative fungus of the disease.
Answer:
Bakane (foolish seedling) disease in rice seedlings. It is caused by a fungal pathogen Gibberella fujikuroi.

Question 3.
What is apical dominance? Name the growth hormone that causes it.
Answer:
Growing Apical bud inhibits, the growth of Axillary buds is called Apical dominance. It is caused by Auxins.

Question 4.
What is meant by bolting ? Which hormone causes bolting?
Answer:
Sudden elongation of internodes prior to flowering is called bolting. It is caused by Gibberellins.

Question 6.
What is Ethephon? Write its role in agricultural practices.
Answer:
It is an Ethylene releasing chemical formulation. It hastens fruit ripening in tomatoes and apples and accelerates abscission in flowers and fruits. It promotes female flowers in cucumbers, there by increasing the yield.

Question 8.
What do you understand by vernalisation?
Answer:
The method of inducing flowering quantitatively or qualitatively on exposure to low temperature is called vernalisation. It prevents precocious reproductive development late in the growing season, and enables the plant to have sufficient time to reach maturity. It specially refers to the promotion of flowering. It also stimulates a subsequent photoperiodic flowering response in biennials, [cabbage, carrot]

Question 9.
Define the terms quiescence and dormancy.
Answer:
The condition of a seed when it is unable to germinate only because favourable external condition normally required for growth are not present is called quiescence.

Question 2.
Write the physiological responses of Gibberellins in plants.
Answer:

Question 4.
What are the physiological prodesses that are regulated by ethylene in plants?
Answer:

Question 5.
Write short notes on seed dormancy.
Answer:
The inability of seed to germinate or grow is called dormancy. It may be due to either external factors or internal factors.

2) Hard seed coat:
In fabacea members, seeds have hard seed coats which prevent uptake of oxygen or water. It can be broken by scarification in which the hard seed coat is ruptured or weakened.

3) Chemicals :
Seeds of some plants (tomato) contain chemical compounds which inhibit their germination.

External factors:
1) Low temperature treatment :
Many seeds (polygonum) with not germinate until they have been exposed to low temperatures in moist conditions in the presence of oxygen for weeks to months. The practice of layering the seeds during winter in moist sand and peat is called stratification or prechilling.

2) Seeds of many domestic plants may be limited only by lack of moisture or warm temperature.

Question 6.
Which one of the plant growth regulators would you use if you are asked to.
a) Induce rooting in a twig
Answer:
Auxins 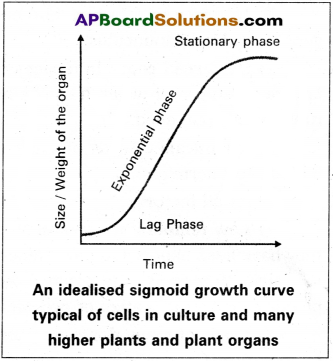 3) Stationary phase :
Limited nutrient supply, slows down the growth leading to a stationary phase. If we plot the parameter of growth against time, we get a typical sigmoid or S-curve. 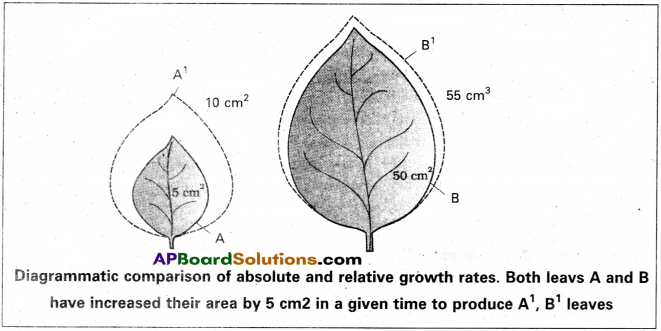 Auxins:
Discovery :
Observation of Charles Darwin and his son Francis Darwin, that the coleoptiles of canary grass responded to unilateral illumination by growing towards the light. It was concluded that the tip of the coleoptile was the site of transmittable influence that caused the bending of the entire coleoptile. Auxin was isolated by F.W. Went from the tips of coleoptiles of oat seedlings.

Question 1.
Fill in the blanks with appropriate word/words.
a) The phase in which growth is most rapid is ………… .
b) Apical dominance as expressed in dicotyledonous plants is due to the presence of more ………… in the apical bud than in the lateral ones.
c) In addition to ouxin, a …………. must be supplied to the culture medium to obtain a good callus in plant tissue culture.
d) ………….. of vegetative plants are the sites of photoperiodic perception.
Answer:
a) LOg phase or exponential phase
b) Auxins
c) Cytokinin
d)Shootapices of plants

Question 4.
A farmer grows cucumber plants in his field. He wants to increase the number of female flowers. Which plant growth regulator can be applied to achieve this?
Answer:
Ethyline.

Question 6.
Light plays an important role in the life of all organisms. Name any three physiological processes in plants which are influenced by light.
Answer:
Growth, differentiation and development.

Question 10.
‘Both growth and differentiation in higher plants are open’ Comment.
Answer:
Both growth and diffentitation in higher plants are open because, cells/tissues arising out of the same meristem have different structures of maturity and their location. Eg. : Cells away from root apical meristem differentiate as root cap cells, while those pushed to the periphery nature as epidermis.

Question 12.
Would a defoliated plant respond to photoperiodic cycle? Why?
Answer:
No, because some hormonal substance migraterwom leaver to shoot apices for induce flowing.

Question 13.
What would be expected to happen if
a) GAj is applied to rice seedlings.
b) Dividing cells stop differentiating.
c) A rotten fruit gets mixed with unripe fruits.
d) You forget to add cytokinnin to culture medium.
Answer:
a) Appearance of disease symptoms (Bakane disease) in uninfected rice seedings.
b) Growth of the plant body in stopped.
c) Unripe fruits became ripened due to ethylene.
d) Initiation of heafy shoots is inhibited.