Language has a very important social purpose. It is the most powerful means of communication. It can be used in two ways for the purpose of communication. One is speech form and the other is written form. In every day situation we use more speech form rather than written form. For effective communication in speech form we need correct pronunciation and intonation. In the written form we need correct spelling and punctuation. We use 26 letters of alphabet for written form, among them 21 consonant letters and 5 vowel letters. But for speech form we use 44 sounds. These 44 sounds are divided into 20 vowel sounds and 24 consonant sounds. Phonetics describes these sounds using the symbols of the International Phonetic Alphabet (IPA). The IPA uses a single symbol to describe each sound in a language. 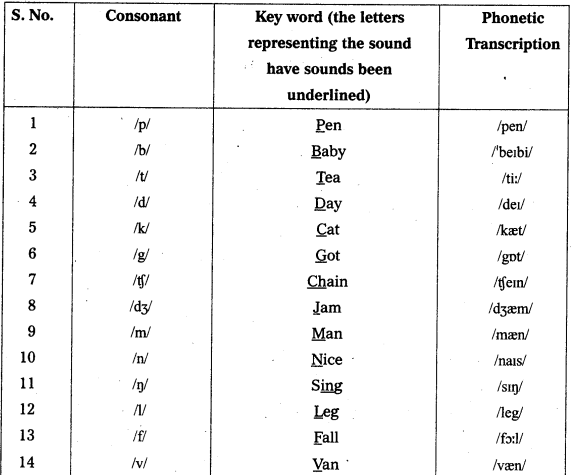 Task: 1
Write the Phonetic Transcription for the following words with the help of a standard dictionary.

Task: 3
What is the definition of a silent letter ?
A silent letter is left unpronounced, such as the d in handkerchief, the n in autumn and the p in cupboard. When talking fast, silent words like t are very lightly pronounced in words like Christmas, mountain and little.

Read the following words loudly and find out the silent consonant letters and underline them. 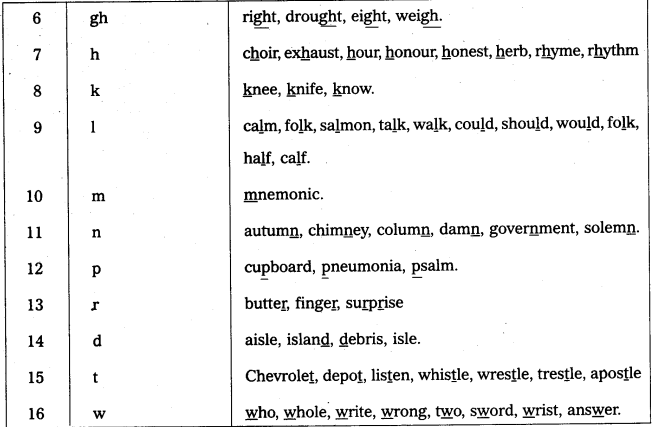 Different Sounds: Find the odd one out

Look at the following groups of words. In each group there are three words which have the same consonant but one word is quite different in sound/pronunciation.

Find the word in the group which does not have a homophone to the sound of the underlined letters. 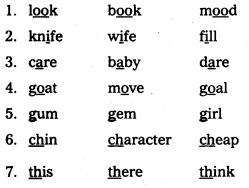 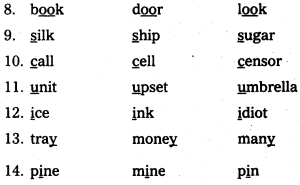 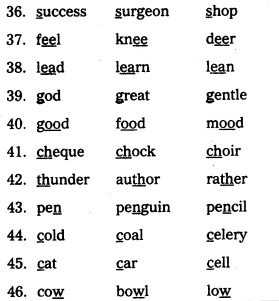 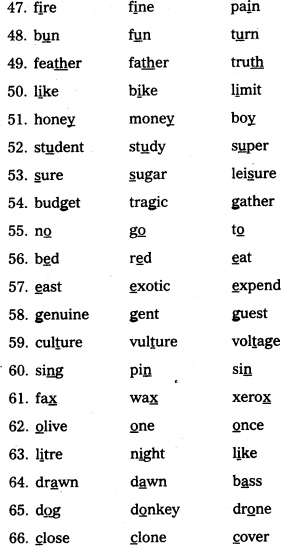 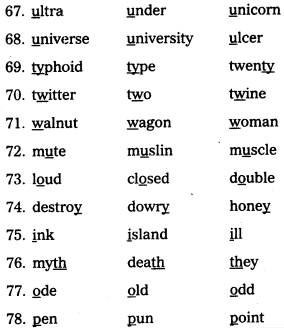 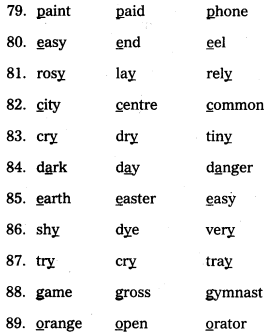 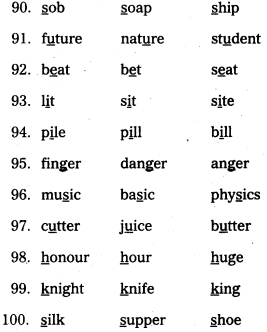 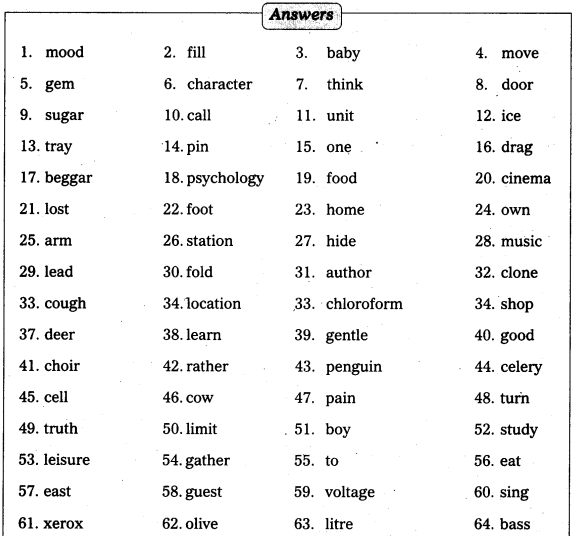 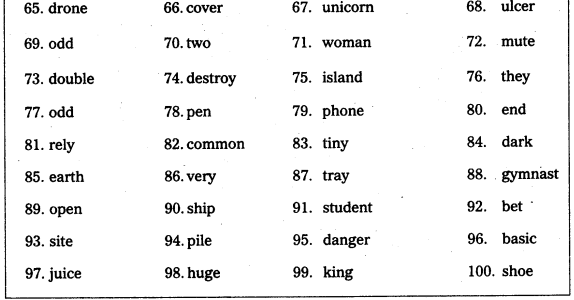 One of the most difficult areas of English Language is its pronunciation. The letters in English unlike in Telugu do not always carry one definite sound. When we pronounce it in one way, the standard pronunciation shows the other.

Languages are two types. They are Phonetic and Non-phonetic Languages. In Phonetic Languages, the letter and the sound have one to one relationship. In other word, one letter represents only one sound. As such, the number of letters and sounds in phonetic language are the same. E.g. Telugu, Hindi etc. Non-Phonetic languages are those where there is no corresponding relationship between letter and sound. Here the number of letters may be less than the sounds existing in the language. For instance, English has 26 letters where the sounds are 44. As such, each letter is supposed to carry more than one sound, e.g. ‘gadget’ is pronounced as /gæxʒ.ıt/. The ‘g’ in the first place is pronounced as /g/ whereas the ‘g’ in the fourth place is pronounced as /dʒ/. The IPA, or International Phonetic Alphabet is devised to represent each single sound with a specific symbol. 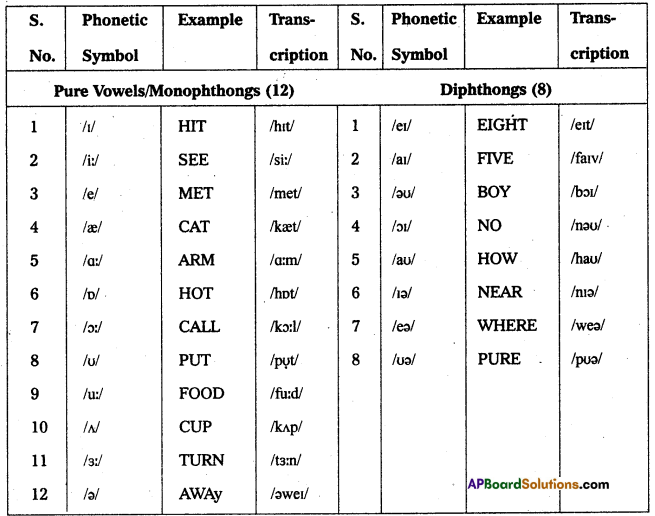 Vowels are those sounds during the pronunciation of which, the mouth passage is unobstructed. There are 20 vowel sounds, and they can be classified into 12 pure vowels and 8 diphthongs. A diphthong is a sound formed by the combination of two vowels in which the sound begins at one vowel and moves towards another (as in coin, loud, and side). To classify the vowel sounds we have to describe them in the following way.

Position of Tongue
Vowels can be classified into three categories taking into account the part of the tongue raised. Thus vowels can be ’front’, ‘back’ or ‘central’.

Diphthongs
Another category which we consider very briefly is ‘Diphthongs’. Diphthongs are nothing but vowels with glides in them. Diphthong always occupies one syllable each.

Use a dictionary and fill in the blanks with any three words having similar vowel sound.
(One is done for you) 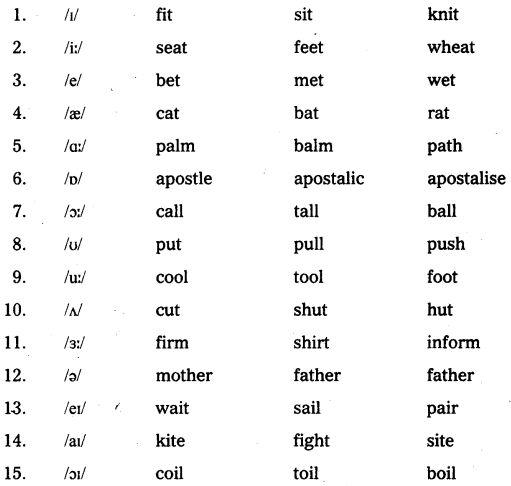 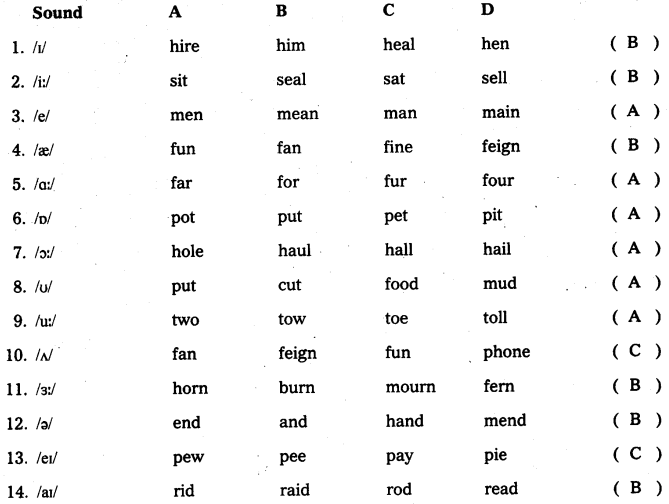