A) Goods market equilibrium: The 1st part of Say’s law of markets explains the goods market equilibrium. According to Say “supply creates its own demand”. Say’s law states that supply always equals demand. Whenever additional output is produced in the economy, the factors of production which participate in the process of production. The total income generated is equivalent to the total value of the output produced. Such income creates additional demand for the sale of the additional output. Thus there could be no deficiency in the aggregate demand in the economy for the total output. Here every thing is automatically adjusting without need of government intervention.

The classical economists believe that economy attains equilibrium in the long run at the level of full employment. Any disequilibrium between aggregate demand and aggregate supply equilibrium adjusted automatically. This changes in the general price level is known as price flexibility.

B) Money market equilibrium : The goods market equilibrium leads to bring equilibrium of both money and labour markets. In goods market, it is assumed that total income spent the classical economists agree that part of the income may be saved. But the savings is gradually spent on capital goods. The expenditure on capital goods is called investment. It is assumed that equality between savings and investment is brought by the flexible rate of interest. This can be explained by the following diagram. 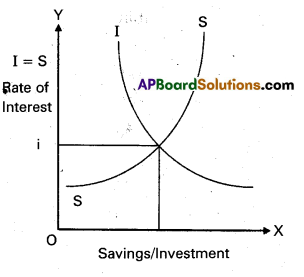 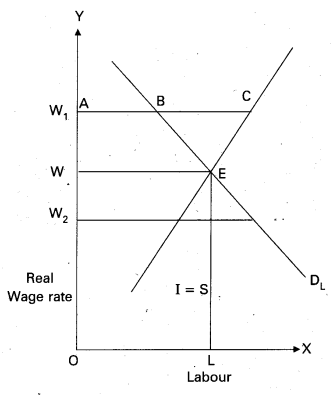 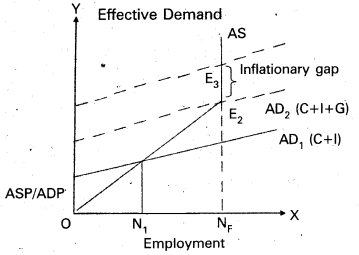 In the diagram X’ axis represents the employment and Y axis represents price. A.S is aggregate supply curve A.D is aggregate demand curve. The point of intersection between the two ‘E1‘ point. This is effective demand where all workers are employed at this point the entrepreneur’s expectation of profits are maximised. At any other points the entrepreneurs will either incur losses or earn sub-normal profits.

Question 3.
How does Keynes advocate government expenditure to reduce unemployment ? Explain.
Answer:
The role of the state has become almost all pervasive in the economic organisation of the country. Whether it may be developed or underdeveloped country.
The activities undertaken by the modem State in the economic organisation of a country may be discussed under the following heads.

1) The State and Industry: The activities of the State in the industrial sphere may be considered under three groups namely, the regulatory functions, control of monopolies and lastly nationalisation or public ownership.

The state is taking an increasing role in regulating the manner of forming and operating industrial undertakings. The undertakings will probably have to take out licenses from the government before they can start operation. To check the growth of few giant concerns, the state has been forced to adopt measures for fixing prices and other terms of sale of the monopolised products. All the methods of controlling monopolies have ineffective, then the State take over the ownership of the monopolistic concerns.

2) State and Labour : The modem state has also been forced to take a number of steps for protecting the interests of labour. In this respect the state has passed factory laws prohibiting the employment of children and women under certain circumstances, fixing of reasonable hours of work etc.

3) The State and the Social Services : State has adopted schemes of social insurance according tp which all persons get free medical treatment and cash payments during periods of sickness, receive unemployment benefits if they are out of work, enjoy pensions in their oldage or in case of disablement. The widows and orphans also receive pensions from the State. The purpose behind these schemes is to relieve the poverty of the citizens and to provide security against the various risks of life.

5) State and Inequalities of Income : It is the duty of the state to take all reasonable steps for the reduction of inequalities of income. Therefore, the state has adopting the system of progressive taxation of incomes, imposing levy of death duties or inherited proper ties at progressive rates and distributing the proceeds of the taxes among the poorer sections of the community.

7) The State and the Trade Cycles : Both monetary policy and budgetary policy can be utilised by the State to check the course of the trade cycle.

8) The State and Economic Planning : An economic plan is a method of organising and utilising .the available resources of a country for the purpose of fulfilling certain desirable end. The modem state is expected to formulate such an economic plan or plans. It is necessary or desirable for the state to formulate a plan for rapid economic development especially in underdeveloped economies, to secure a better distribution of the national income among all classes of people, for the development of resources of the community so on to ensure full employment for everybody etc. All these activities of the state will increase the public expenditure.

2) Automatic adjustment: Classicals believed that the economic forces automatically adjust by them self without interference of the government. But automatic adjustment mecha-nism faild to restore. Full employment during the period of economic depression.

3) Money is neutral: J.M Keynes denounced the classical assumption that money is neutral. He integrated monetary variables with real variable through rate of interest and successfully demonstrated the effect of changes in money supply on real variables.

4) Wage-cut-policy : Classicals suggested the wage cut policy to solve the problem of involuntary unemployment. But according to Keynes it is impossible to cut money wage. The unions always fight for a hike in money wage and never accept a cut in money wage.

6) Labour supply: The supply of labour depends upon the money wage rate and not on real wage rate because workers suffer from money illusion i.e., they are interested in the amount of money they receive rather than its purchasing power.-

8) According to Keynes existence of perfect competition is also wrong.
Having made such a frontal attract on the classical theory. Keynes offered his own theory in its place. So his theory is treated as an improvement over the classical theory of employment. 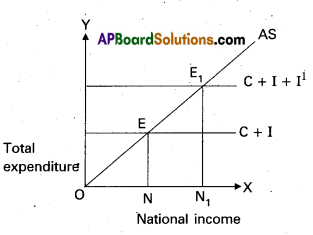 Keynesian employment theory states that in general there is unemployment in the economy in the short run that is caused by deficiency of aggregate demand. This can be shown in the side diagram. 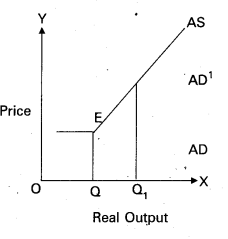 Output is shown on X-axis as national income on the Y- axis consumption expenditure (Q and investment I are measured. AS is the aggregate supply curve. E represents the equilibrium point. ON output represents low level employment and to ensure full employment. The output should reach ON1 level. The aggregate demand helps determine output in the Keynesian approach. AS is upward sloping curve. AD and AS intersects at point A. It implies that a modem market economy can get trapped in an under employment equilibrium. Thus Keynes’s analysis created a revolution in macro economics.

According to this law the supply always equals to demand it can be expressed as S = D. Whenever additional output is produced in the economy. The factors of production which participate in the process of production. Earn income in the form of rent, wages, interest and profits.

Question 4.
Explain the wage cut policy.
Answer:
Wage cut policy is one of the assumption of classical theory of employment which was started by “AC Pigou” who defended the classical theory and its full employment assumption. To Pigou and others the wage fund is given. The wage rate determined by dividing the wage fund with the number of workers. Pigou advocated a general cut in money wages in times of depression to restore full employment.

In the table when the level of employment is 14 lakh workers, aggregate demand price is equal to aggregate supply price i.e ₹ 700 crores. This can be shown in the following diagram. 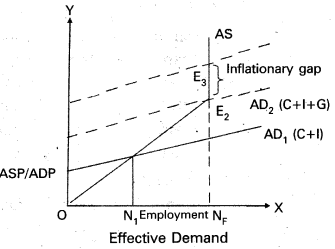 According to Keynes, to achieve full employment an upward shift of aggregate demand curve is required. This can be possible through government expenditure on goods and services supplied in the economy, whenever private entrepreneurs may not show interest to invest. With this the AD1 curve (C + I) shift as AD2 (C + I + G) at new point of effective demand E2, where the economy reaches full employment level i.e., ONE

Question 7.
What are the sources of public Revenue. [March 18, 17, 16]
Answer:
Revenue received by the government from different sources is called public revenue.
Public revenue is classified into two kinds.

1) Tax Revenue : Revenue received through collection of taxes from the public is called tax revenue. Both the state and central government collect taxes as per their allocation in the constitution.
Taxes are two types.
a) Direct taxes:

d) Grants-in-aid : Grants are amount received without any condition of repayment. They are not repaid.
These are two types.

Question 1.
Classical economics.
Answer:
The term classical economics refers to the body of economic group which held their influence from the letter half of the 18th century to the early part of the 20th century. The most important principle of classicism are personal liberty Private property and freedom of private enterprise.

Question 2.
Laissezf aire
Answer:
According to classicals the role of government in economic activities should be nominal or very less. The free play of economic forces it self bring about the fuller utilization of economic resources including labour. Any interference with the free play of market forces under such circumstances the state shall not interfere in economic matter. It should pursue a policy of laissez fair-a policy of, non-intervention in economic matters.

Question 3.
Say’s law of market [March 16]
Answer:
J.B Say a french economist advocated the famous ‘Law of markets’ on which the classical theory of employment is based. According to this law “supply creates its own demand”. According to this law whenever additional output is created. The factors of production which participate in that production receive incomes equal to that value of that output. This income would be spent either on consumption goods or on capital goods. Thus additional demand is created matching the additional supply.

Question 15.
Wage – cut policy
Answer:
This is the policy advocated by A.C Pigou to reduce unemployment in the economy. It suggests that the wages of the labour should be reduced so that the unemployed can be employed.

Question 17.
Surplus budget
Answer:
It refers to the budget in which the total receipts exceed the total expenditure.

Question 18.
Balanced Budget
Answer:
It is the budget in which the total receipts and total expenditure are equal.

Question 21.
Budget.
Answer:
Budget is the annual statement of the estimated receipts and estimated expenditure of the government for the ensuing financial year.