Question 1.
Discuss Wealth definition.
Answer:
Adam Smith was the first person to give a precise definition of Economics and separate this study from other social sciences. Adam Smith is considered as ‘Father of Economics’. He defined it in his famous book Wealth of Nations’, as “An enquiry into the nature and causes of wealth of nations”. Most of the economists in the 19th century held this view.

J.B. Say states that “The aim of political economy is to show the way in which wealth is produced, distributed and consumed”. The other economists who supported this definition are J.B. Say, J.S.Mill, Walker and others.
The main features of Wealth definition :

Criticism : The wealth definition was severely criticised by many writers due to its defects.

Question 2.
Explain Welfare definition.
Answer:
Alfred Marshall tried to remedy the defects of wealth definition in 1890. He shifted emphasis from production of wealth to distribution of wealth.

According to Marshall “Political economy or Economics is a study of mankind in the : ordinary business of life. It examines that part of individual and social action which is most closely connected with the attainment and with the use of material requisites of well-being. Thus Economics is on one side, a study of wealth and on the other and more important side, a part of study of man”.

Edwin Cannan defined it as “The aim of political economy is the explanation of the general causes on which the material welfare of human beings depends”.

In the words of Pigou “The range of enquiry becomes restricted to that part of social welfare that can be brought directly or indirectly into relation with the measuring rod of money”.

The main features of Welfare definition :

Question 3.
Explain how Robbings definition is superior to the welfare definition.
Answer:
Lionel Robbin’s of London School of Economics introduced the ‘Scarcity’ definition of Economics, in his book.

‘An Essay on the nature and significance of Economic Science’.

According to Robbin’s “Economics is the science which studies human behaviour as a relationship between ends and scarce means which have alternative uses”. Scarcity of resources is the central idea in Robbin’s definition.
Main features of Robbin’s definition :

Welfare definition: According to Marshall “Economics is on one side a study of wealth and on the other and more important side a part of study of man.” Marshall in his definition gave more importance to man than wealth.

Marshall defined “Political economy or Economics is a study of mankind in the ordinary business of life, it examines that part of individual and social action which is most closely connected with the attainment and with the use of the material requisites of well-being.

Question 4.
Define Prof. Samuelson’s growth definition.
Answer:
Robbin’s definition does not take into consideration the dynamic problem of economic growth. As the time passes the scarcity of means ends, targets choices undergo a change. The inherent defect of Robbins definition has been rectified by Paul Samuelson in his definition of Economics.

Prof. Paul Samuelson, a Nobel Prize winner of 1970 provided a new definition of economics in which he introduced time element and it is dynamic in nature. Therefore his definition is known as growth oriented definition.

According to Samuelson “Economics is the study of how people and society choosing with or without the use of money, to employ scarce productive resources that could have alternative use to produce various commodities and distribute them for consumption. Now or in the future among various persons and groups in society.
Important features of the definition :

Shapiro says “Micro Economics has got relation with small segments of the society.
Macro Economics : The term Macro Economics is derived from the Greek word ‘MAKROS’ which means large. Thus Macro Economics is the study of economic system as a whole. It was developed by J.M. Keynes. It studies aggregates in the economy like national income, total consumption, total saving and total employment etc. It is also known as Income and Employment theory.

Question 2.
Characteristics of Wants. [March 18, 17, 16]
Answer:
Human wants are starting point of all economic activities. They depend on social and economic conditions of individuals.
Characteristic features of wants :
1) Unlimited wants : Human wants are unlimited. There is no end to human wants. When one want is satisfied another want takes its place. Wants differ from person to person, time to time and place to place.

2) A particular want is satiable : Although a man cannot satisfy all his wants, a particular want can be satisfied completely in a period of time.
Ex: If a person is thirsty he can satisfy it by drinking a glass of water.

3) Competition : Human wants unlimited. But the means to satisfy them are limited of scarce. Therefore they complete with each other in priority of satisfaction.

4) Complementary: To satisfy a particular want we need a group of commodities at the same time.
Ex: Writing need is satisfied only when we have pen, ink and paper together.

5) Substitution : Most of our wants can be satisfied by different ways.
Ex : If we feel hungry, we take some food and satisfy this want.

6) Recurring : Many wants appear again and again thought they are satisfied at one point of time.

7) Habits : Wants change into habits, which cannot be given up easily.
Ex : Smoking cigarettes for joke results into a habit if it is not controlled.

2) Place utility : By changing the place some goods acquire utility.
Ex : Sand on the sea shore has no utility. If it is brought out and transported to market, it gains utility. This is place utility.

3) Time utility : Time utilities are created by storage facility.
Ex : Business men store food grains in the stock points in the off season and releases them to markets to meet high demand and obtained super normal profits.

The law of diminishing marginal utility is one law derived using this deductive method.
Merits of deduction:

Inspite of the above stated advantages, it is not free from limitations. It is based on unrealistic assumptions with little empirical content.

2. Inductive method : This method is also known as Historical, Empirical, Concrete, Ethical or Realistic. This method was strongly advocated and made use of by economists belonging to the historical school. This method proceeds from a part to the whole from particular to general or from the individual to the universal.
The following are the important steps involved in deriving economic generalisations through inductive method.

Inspite of several advantages it has its own defects. This method is expensive and consuming. It can be used by those who possess skill and competance in handling ex data.

Question 6.
What is meant by Micro Economics ? Discuss its importance.
Answer:
The tehn ‘Micro Economics’ is derived from the greek word ‘MIKROS’ which means ‘small’. Thus Micro Economics deals with individual units like individual demand, price, supply etc. It was popularised by Marshall. It is also called as ‘Price Theory’ because it explains pricing in product market as well as factor market.
Importance :

Question 7.
What is meant by Macro Economics ? Discuss its importance.
Answer:
The term Macro Economics is derived from the greek word ‘MAKROS’ which means large. It was developed by j.M.Keynes. Macro Economics deals with economic system as a while like national income, aggregate demand, aggregate supply, general price level etc. It is also known as ‘Income and Employment’ theory.
Importance :

Question 8.
Explain the circular flow of income with suitable diagram.
Answer:
Income is a flow over a period of time. Income flow is of circular in character. Where beginning and end cannot be traced. National output originates in private and public sectors. It moves to the households. The household is the basic consuming unit in economic life. In every economy income flows from households to firms and vice versa. Thus the factor market and the product market are closely related to each other.

The circular flow of income can be explained with the help of the following diagram. 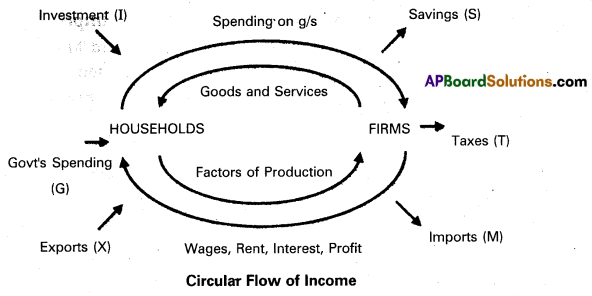 According to the above diagram, it is clear that the factor market and commodity market are closely related to one another.

Question 9.
Explain the differences between Consumer goods and Capital goods.
Answer:
Anything that can satisfy a human want is called a good. Goods can be classified into two types namely,

1) Consumer goods: A consumer good is an economic good or commodity purchased by households for final consumption. Thus these goods satisfy human wants directly.
Ex : Foods, books etc.
Consumer goods further divided into two types.
a) Perishable goods
b) Durable goods
a) Perishable goods : They lose their value in single use.
Ex : Milk, fruits etc.
b) Durable goods: These goods which yields service over period of time. Hence utility from these goods can be derive’d for a long time.
Ex : T.Vs & Computers.

Question 1.
Economic goods
Answer:
Economic goods are man-made, they have cost of production and price. They are limited in supply. They have both value in use and value in exchange.
Ex : Pen, Book etc.

Question 2.
Capital goods
Answer:
Goods which are used in the production of other goods are called producer or capital goods. They satisfy human wants indirectly.
Ex : Machines, tools, buildings etc.

Question 3.
Intermediary goods [March 17]
Answer:
Goods which are under the process of production and semi finished goods are known as intermediary goods.
Ex : Cotton and fibre etc.

Question 5.
Income
Ans. Income is a flow of satisfaction from wealth per unit of time. In every economy income’ flows from households to firms and vice versa. Income can be expressed in two types.

Question 6.
Utility [March 16]
Answer:
Utility is the wants satisfying capacity of goods and services. It is a subjective concept. No one can measure it in mathematical terms.

Question 10.
Deductive Method
Answer:
Deductive method is the process from general to particular or from the universal to the individual.

Question 11.
Inductive method
Answer:
It is the process from particular to general or from the individual to the universal.
Economic statistics : It refers to the functional relationship between the two variables whose values are related to the same point. This concept was introduced by J.S. Mill.

Question 13.
Economic dynamics
Answer:
J.S. Mill introduced this concept in Economics. It refers to the analysis where the functional relationship is established between relevant variables whose values belong to different point of time.

Question 14.
Partial equilibrium
Answer:
It was popularised by Marshall. It exists when an equilibrium relates to a single variable.

Question 16.
Micro Economics
Ans. The word ‘Micro’ derived from Greek word ‘Mikros’ which means ‘small’. It was developed by Marshall. It is the study of the individual units like individual demand, price, supply etc.

Question 17.
Macro Economics
Answer:
The word ‘Macro’ derived from Greek word ‘Makros’ which means large. It was developed by J.M. Keynes. It studies aggregates or economy as a whole like national income, employment, general price level etc. It is also called “Income and Employment” theory.