→ Rutherford’s model resembles the solar system. The positive charge at the centre is called nucleus and electrons move around it in circular paths are called the orbits.

→ Rutherford model does not explain the electronic structure of the atoms.

→ Light is an electromagnetic radiation. The characteristics of wave motion are wavelength, wave number, frequency, velocity and amplitude.

→ Planck’s quantum theory states that radiation is absorbed or emitted by a body in quanta, which propagates in the form of waves. The energy of radiation E = hν.

→ Bohr’s model of atom : Electrons revolve round the nucleus in stationary orbits with constant energy given by the principal quantum number.
Emission or absorption of energy by electron will be in quanta. While doing so, the electron jumps from one orbit to another.
The energy of the radiation emitted or absorbed is equal to the difference in the energies of the two orbits.
∆E = E2 – E1 = hν.

→ The splitting up of spectral lines when an atom is subjected to strong magnetic field is called Zeeman effect.

→ The splitting up of spectral lines when an atom is subjected to strong electric field is called Stark effect.

→ It is impossible to locate the exact position and momentum of a moving electron simultaneously and accurately – this is Heisenberg’s uncertainty principle.

→ In the building up of anatom the electron will occupy an available orbital of lowest energy – this is Auf-bau principle.

→ Ψ is the wave function but Ψ2 denotes the probability of finding an electron in the space around the nucleus.

→ From the value of |Ψ|2 at different points within the atom, it is possible to predict the region around the nucleus where electron will most probably be found.

→ The surface at which the probability of finding an electron is zero is called a radial node.

→ According to quantum mechanical model of the atom, the electron distribution of an atom, containing a number of electrons is divided into shells.

→ Half filled and completely filled shells are more stable. 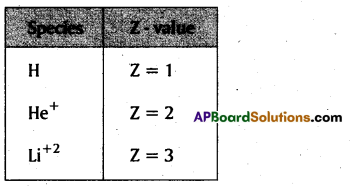 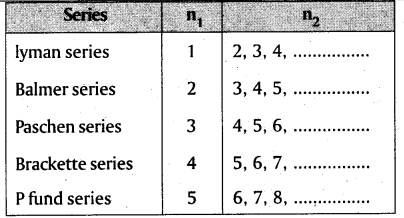 → No. of revolutions made by on electron in second = \(\frac{\text { velocity electron }}{\text { circumference of circular orbit }}\)

→ According to de-broglie for a station any wave
2πr = nλ

→ Shortest wave length is possible for any series if n2 = α