Question 4.
Name the type of land plants that can tolerate the salinities of the sea.
Answer:
Halophytes.
Ex : Rhizophora.

Question 5.
Define Heliophytes and Sciophytes. Name a plant from your locality that i$ either Heliophyte or Sciophyte.
Answer:
Plants grow in direct sunlight are called heliophytes.
Ex : Tridax, grass.

Question 1.
What are hydrophytes? Briefly discuss the different kinds of hydrophytes with example.
Answer:
Hydrophytes are the plants which grow in water or in very wet places. According to their relation to water and air hydrophytes are classified into five categories. They are

1. Free floating Hydrophytes :
They float freely on the surface of the water and have no contact with soil.
E.g. : Pistia, Eichhornia, Wolffia, Salvinia, Azolla.

2. Rooted hydrophytes with floating leaves :
They are attached to the muddy soil by roots. Their leaves have long petioles which keep them floating on the surface of water.
E.g. : Nymphaea, Nelumbo and Victoria regia.

3. Submerged suspended hydrophytes :
They are completely submerged and suspended in water, but not rooted in the mud and have no contact with air.
E.g. : Hydrilla, Ceratophyllum, Utricularia and Najas.

4. Submerged rooted hydrophytes :
These plants are completely submerged in water. They are attached to the muddy soil by roots.
E.g. : Vallisneria, Potamogeton etc.

Some amphibious plants grow around water bodies, with water touching them. They will survive in dry periods also.
E.g. : Typha, Cyperus etc.

Question 3.
List out the anatomical adaptations of hydrophytes.
Answer:

Question 4.
Write a brief account on classification of xerophytes.
Answer:
On the basis of their Drought resisting Capacity, Xerophytes are generally classified into the following three categories. 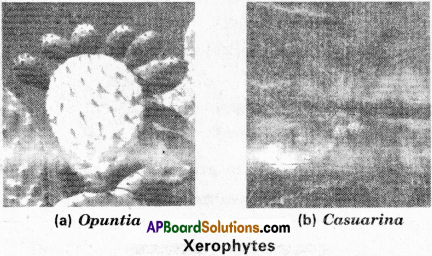 1. Ephemerals :
They are called “drought evaders” or “drought escapers”. They are annuals which complete their life cycle with in a period of 6-8 weeks. They are found in dry zones, e.g. : Tribulus, chenopodium.

2. Succulents :
These are called “drought avoiding plants”. They are fleshy due to storage of water in the form of mucilage. The stored water is sparingly utilised during dry periods.
Examples :
a) Stem succulents : Opuntia, Euphorbia.
b) Leaf succulents : Bryophyllum, Aloe, Agave etc.
c) Root succulents : Asparagus, Ceiba.

Question 6.
Give in detail the anatomical adaptations shown by xerophytes.
Answer:

Question 8.
Define ecosystem/ecological services. Explain in brief with regard to pollination.
Answer:
The processes by which the environment produces resources that we often take for granted such as cleen water, timber and habitat for fisheries and pollination of native and agricultural plants is called Ecosystem /Ecological services.

The transfer of pollengrains to fertilize the ovaries of flowers is called pollination. It is an essential part of a healthy ecosystem. Most flowering plants require pollinators to produce fruits and seeds. So pollinators play a significant role in the production of more food crops in the world. Declines of pollinator activity could have serious economic repercussions throughout the world.

The most important pollinator for Agriculture is Honeybee. Over 1,00,000 invertebrate species such as bees, moths, butterflies, beetles and flies serve as pollinators worldwide. At least 1035 species of vertebrates including birds, mammals and reptiles also pollinate many plant species. Continued declines in pollinator activity could mean rising costs for pollinator dependent fruits and vegetables and the disruption of entire ecological systems.

Question 9.
Write about the measure to be taken to sustain ecological functions.
Answer:

Question 10.
What measure do you suggest to protect the pollinators?
Answer:

Question 1.
Give an account of ecosystem services with reference to carbon fixation and oxygen release.
Answer:
Trees are essential to carbon sequestration keeping excess carbon from entering the atmosphere. The main chemical flow between forest and atmosphere is the exchange of CO2 and O2. Forests provide a vast bank for CO2 and a large amount of CO2 is deposited in its timber. It plays an essential role in maintaining a dynamic balance between CO2 & O2 in atmosphere. According to photosynthesis equation 180 gm of Glucose and 193 gm O2 are produced by using 264 gm of CO2 and 108 gm of water and 677.2 K.cal. of solar energy.

180 gm of Glucose can be transformed to 162 gm of polysaccharide inside the plant. So whenever plant produces, 162 gm of dry organic matter 264 gm of CO2 will be fixed. Then the total amount of the dry organic matter of the reserve forests can be estimated. It provides a foundation for reckoning the total amount of CO2 fixation by the forests in the reserve.

Ecosystem services – oxygen release :
Trees and plankton play a big role in release of oxygen; which depends on the species of tree, its age, its health, and also on the trees surroundings. “A mature leafy tree produces as much oxygen in a season as 10 peole in hale in a year”, or A single mature tree can absorb carbon dioxide at a rate of 48 Ibs/year and release enough oxygen back into the atmosphere to support 2 human beings.

One acre of trees annually consumes the amount of CO2 equivalent to that produced by driving an average can for 26,000 miles. That same acre of trees also produces enough oxygen for 18 people to breathe for a year.

Submerged macrophytes release O2 and enrich dissolved O2 in water. The plants and planktons are described as “the Lungs of the World”, taking billion of tonnes of CO2 and exhaling billions of tones of O2.

Micro organisms also contribute to the oxygen release in direct and indirect ways.

Ex : Cyanobacteria releases O2 in a direct way. The other supporting services include Nutrient cycling through decomposition of fallen Logs in forests, soil formation by bacteria and lichens.

Question 1.
Categorise the following plants into hydrophytes halophytes, mesophytes and xerophytes and give reasons.
a) Salvinia b) Opuntia c) Rhizophora d) Mangifera
Answer:
a) Salvinia is a hydrophyte, It grows on the surface of water.
b) Opuntia is a xerophyte, grows in xeric (dry) areas.
c) Rhizophora is a Halophyte which tolerates the salinities of the sea.
d) Mangifera is a mesophyte, grows in habitats where water is neither scarce nor not abundant.

Question 2.
In a pond, we see plants which are free-floating ; rooted-submerged; rooted emergent; rooted with floating leaves, write the type of plants against each of them.
Answer:

b) Measures to sustain Ecological services are