Question 1.
Medicines are either man made (i.e., synthetic) or obtained from living organisms like plants, bacteria, animals etc. and hence the latter are called natural products. Sometimes natural products are chemically altered by man to reduce toxicity or side effects. Write against each of the followinig whether they were initially obtained as a natural product or as a synthetic chemical.
a) Pencillin_ b) Sulfonamide_ c) Vitamin C_ d) Growth Hormone_
Answer:
a) Pencillin – Natural
b) Sulfonamide – Synthetic
c) Vitamin C – Natural
d) Growth Hormone – Natural.

Question 4.
Explain the Zwitterionic form of an amino acid.
Answer:
At a specific PH the amino acid carries both the +ve and -ve charges in equal number and exists as dipolar ion. It is also called as zwitterionic form. At his point, the net charge on it is zero.

Question 6.
Glycine and Alanine are different with respect to one substituent on the a cabron. What are the other common substituent groups?
Answer:
Hydrogen, Carboxyl group, amino group and a variable group designated as R group.

For example when glucose is degraded to lactic acid in our skeletal muscle, energy is liberated called Glycolysis, Living organisms have learnt to trap this energy and store it in the form of chemical bonds. When ever requires, this energy is utilised for biosynthetic, osmotic and mechanical work that we perform. The most important form of energy currency in living systems is adenorine triphosphate (ATP).

Question 2.
Schematically represent primary, secondary and tertiary structures of a hypothetical polymer using protein as an example.
Answer:
The sequence of amino acids, i.e., the positional information in a protein is called the primary structure of a protein. A protein is imagined as a line, the left end represented by the first amino acid called N- terminal amino acid and the right end represented by the last aminoacid called C-terminal aminoacid In proteins, only, right handed helics are observed. Other regions of the protein thread are folded into other forms in what is called the secondary structure. In addition, the long protein chain is also folded upon itself like a hollow woolen ball giving rise to the tertiary structure.

Question 3.
Nucleic acids exhibits secondary structure. Justify with example.
Answer:
Nucleic acids exhibit a wide variety of seconary structure. For example, one of the secondary structures exhibited by DNA is Watson – Crick model. According to this, DNA exists as a double helix. The two stands of polynucleotides are antiparallel i.e., run in the opposite direction. The back bone is formed by the sugar-phosphate, sugar chain. The nitrogen bases are projected more or less perpendiular to this backbone but face inside. A combines with T by two hydrogen bonds where G combines with C by three hydrogen bonds. One full turn of the helical strand would involve ten base pairs. The length of one coil is 34 A and the distance between base pair is 3.4 A . This type of DNA is called B-DNA. 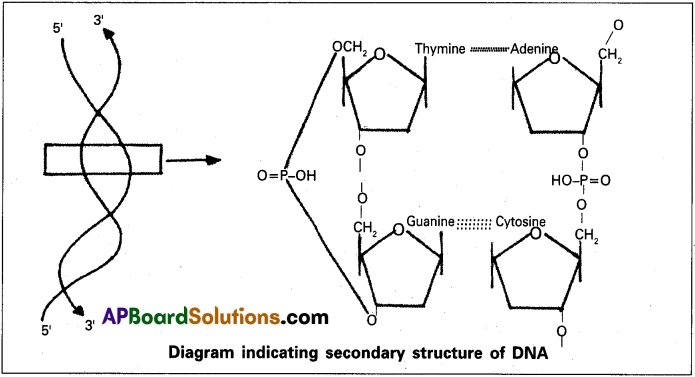 Question 5.
Is rubber a primary metabolite or a secondary metabolite ? Write four sentences about rubber.
Answer:
Rubber is a secondary metabolite. Rubber is an elastic hydro carbon polymer that was orginally derived from latex, d milky colloid produced-by some plants. The purified form of natural rubber is the chemical polyisoprene. It is used extensively in many products, as a synthetic rubber. It is normally very strechy and flexible and extremely waterproof.

Question 6.
Dynamic state of body constituents is a more realistic concept than the fixed concentrations of body constituents at any point of time. Elaborate.
Answer:
All the living organisms contains biomolecules in certain concentrations, which have a turn over. They are constantly being changed into some other biomolecules and also made from some other biomolecules. This breaking and making occurs through chemical reactions called metabolism. Each of the metabolic reactions results in the transformation of biomolecules.

Example :
Removal of CO2 from amino acids making into an amine removal of amino group in a nucleotide base. Majority of metabolic reactions do not occur in isolation but are linked to some other reactions. Metabolites are converted into each other by a series of linked reactions called metabolic pathways. Flow of metabolites through metabolic pathways has a definite rate and direction like auto¬mobile traffic. This metabolic flow is called the dynamic state of body constituents.

Question 1.
What are secondary metabolites? Enlist them indicating their usefulness to man.
Answer:
Metabolic products that do not have identifiable functions in the host organism are called secondary Metabolites. They are Alkaloids, Flavinoids, Rubber, Essential oils. Antibiotics, Coloured pigments, Scents, Gums and Spices.

Flavinoids :
These are a widely distributed group of polyphenolic compounds with health related properties which include anticancer, antiviral, anti inflamatory activities, effects on capillary fregility and can ability to inhibit human platelet aggregation.

Question 2.
What are the processes used to analyse elemental composition, organic constituents and inorganic constituents of living tissue? What are the inferences on the most abundant constituents of living tissue? Support the inferences with appropriate data.
Answer:
Take a living tissue (a vegetable or a piece of liver) and grind it in trichloroacetic acid with the help of Mortar and pestle. The thick slurry obtained was strained through a cheese cloth or cotton, two fractions are formed. The first one is filtrate or acid soluble pool which consists of thousands of organic compounds and the second one is retentate or acid insoluble fraction. All the carbon compounds that we get from living tissues can be called biomolecules.

Weigh a small amount of living tissue and dry it. After the evaporation of water the material is burnt to oxidise all the carbon compounds. The remaining ash contains inorganic elements like sodium, potassium, calcium and magnesium and inorganic compounds like sulphate, phosphate etc., therefore chemical analysis gives elemental composition of living tissues in the form of hydrogen, oxygen, chlorine, carbon etc. From a biological point of view the organic constituents are classified into amino acids, nucleotide bases, fatty acids etc.

Question 3.
Nucleic acids exhibit secondary structure. Describe through Watson – Crick Model.
Answer:
Nucleic acids exhibit a wide variety of secondary structure. For example, one of the secondary structures exhibited by DNA is Watson – Crick model. According to this, DNA exists as a double helix. The two stands of polynucleotides are antiparallel i.e., run in the opposite direction. The back bone is formed by the sugar-phosphate, sugar chain. The nitrogen bases are projected more or less perpendiular to this backbone but face inside. A combines with T by two hydrogen bonds where G combines with C by three hydrogen bonds. One full turn of the helical strand would involve ten base pairs. The length of one coil is 34 A° and the distance between base pair is 3.4 A°. This type of DNA is called B-DNA.

Question 4.
What is the difference between a nucleotide and nucleoside? Give two examples of each with their structure.
Answer:

Fattyacids :
They have a carboxyl group attahed to an R group. The R group could be a methyl or ehtyl or higher number of CH2 groups. For example pulmitic acid has 16 carbons including arboxyl carbon. Fatty acids could be saturated or unsaturated.

Glycolipids :
They are composed mainly of mono-di and trisubstituted Glycerols, the most well-known being the fatty acid esters of Glycerol called Triglycerides. In these compounds, the three hydroxyl groups of Glycerol are each esterified usually by different fatty acids. They function as a food store.

Phospholipids :
Some lipids have phophorous and phsophorylated organic compound in them called phospholipids. They are found in cell membrane.
Ex : Lecithin. 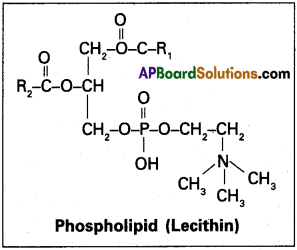 Peptide bond :
Bond between aminoacids in a protein.

Phosphodiester bond :
The bond between the phosphate and hydroxyl group of sugar is called ester bond.

The ester bond an either side of phosphate is called phosphodjester bond.

Question 4.
Find and write down structures of 10 interesting small molecular weight bio-molecules. Find if there is any industry, which manufactures the compounds by isolation. Find out who are the buyers.
Answer:
Aminoacids, Monosacharide and disacharide sugars, fatty acids, Glycerol, Nucleotides, Nucleosides, nitrogen bases are the biomolecules which have low molecular weight.

Question 5.
Proteins have primary sturcture. If you are given a method to known which aminoacid is at either of the two termini (ends) of a protein, can you connect this information to purity or homogeneity of a protein?
Answer:
Proteins are the polymers of a-amino acids. The linear sephence of amino acid is called primary structure. Most of proteins starts with an amino acids called Methionine but they are not homologous. Hence, the detection of N termeni (Or) C-termeni amino acid is not give information of homogeneity of a protein.

Question 6.
Find out and make a list of proteins used as therapeutic agents. Find other applications of proteins (eg. Cosmotics etc.,)
Answer:
Erythroproteins, Monoclenal Antibodies. Interferons thrombin and fibrinogen. Insulin, Renin, Proteins are also commonly used in the manufacture of cosmotics, toxins and as biological buffers.

Question 7.
Explain the composition of triglyceride.
Answer:
Triglycerides consist entirely of just three elements, carbon, Hydrogen and oxygen. The molecules of life all have carbon ‘back bones’ meaning the basic shape of the molecule comes from of connected carbon atoms. There are many hydrogen atoms connected to the carbon backbone of a molecule of life. Each triglyceride contains a small amount of O2.

Triglycerides have four basic parts, one glycerol molecule and three fatty acids. A glycerol is a three carbon molecule the fatty acids are long chains of carbon and hydrogen with two oxygen atoms at one end to produce a Triglyceride.

Question 8.
Can you describe what happens when milk is converted into curd or yoghurt based on your understanding of proteins.
Answer:
Proteins are macromolecules formed by the polymerization of amino acids. Structurally proteins are of 4 types.

Structure :
More than are polyreptide chains assemble to form the quaternary structure. When milk is converted to curd, these complex proteins get denatured, thus converting globuler proteins into fibrous proteins. Therefore by the process of denaturation, the secondary and tertiary structures of proteins are destroyed.

Question 9.
Draw the sturcture of the amino acid, alanine.
Answer:

Question 10.
What are gums made of? Is Fevicol different?
Answer:
Gums are hetero polysacharides. They are made from two or more different types of mono sacharides. On the other hand, Fevicol is polyvinyl alcohol (PVA) glue. It is not a polysacharide.