Question 1.
Explain the composition of the atmosphere.
Answer:

Question 2.
Discuss the structure of the atmosphere along with a diagram.
Answer:
On the basis of the chemical composition the atmosphere is divided into two broad layers. They are -1) Homosphere II) Heterosphere
I) Homosphere : This layer is characterized by uniformity in composition of gases like
Nitrogen, Oxygen, Orgon and Carbondioxide. It consists of the three thermal layers such as Troposphere, Stratosphere and Mesosphere. It extends up to the height of 90 kms.

B) Stratosphere :
i) This layer extends up to a height of 50 kms.
ii) This layer is free from clouds and associated weather phenomenon.
iii) These conditions are most ideal for flying jet aircrafts.
iv) This layer contains Ozone layer.

C) Mesosphere :
i) It extends up to a height of 80 kms.
ii) Meteorites burn up as they enter this layer from the space.
iii) The temperature starts decreasing with the increase in altitude.

II) Heterosphere : Because of its heterogenous composition this layer is called heterosphere. This layer is above 90 kms of the atmosphere. It has two thermal layers called Thermosphere and Exosphere.
A) Thermosphere:
i) It extends up to 400 kms.
ii) Here the temperature rises rapidly with increase in height.
iii) It contains electrically charged particles known as ions. Hence this layer is called Ionosphere.
iv) Radio waves are reflected back to the earth through this layer.
v) It is also known as ‘Ionosphere’.

B) Exosphere :
i) The upper most layer of the atmosphere.
ii) Very little is known about this layer. 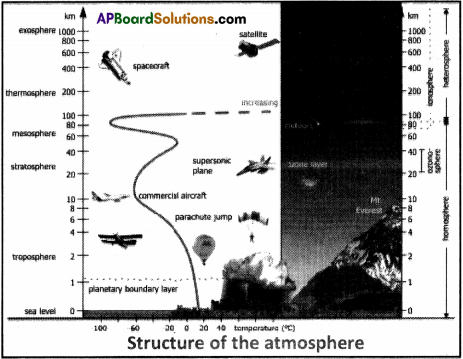 Question 9.
What is Coriolis effect ? And explain its effects.
(OR) 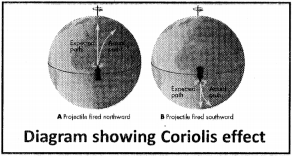 3. At the equator the Coriolis effect is ‘O’ and at the poles it is maximum.

The most important effects of Coriolis force are :
a) The deflection of winds and currents in the ocean.
b) It has significant effect on planes and missiles also.
c) In the northern hemisphere these winds move to the right and in the southern hemisphere to the left. This usually creates the westerly winds moving from the subtropical areas to the poles.
d) The Coriolis effect also affects the movement of ocean currents. 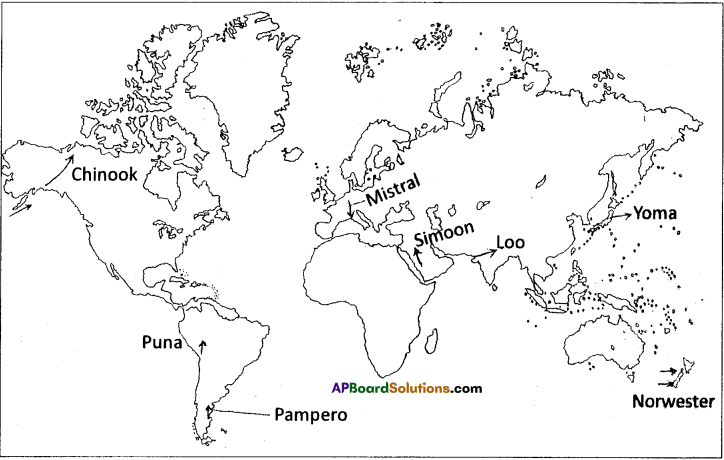 Question 11.
Read the para under the title “Effects of Planetary Winds” on page 43 and comment on it.
Effects of Planetary Winds: You would have noted that the pressure and wind systems are actually a result of the impact of Lithosphere and Hydrosphere on Atmosphere. These winds play a crucial role in transporting heat and moisture across the world. That is why no part of the world gets too cold or too hot for life to survive. Had there been no atmosphere (as on the Moon) it would have got intolerably hot in day time or in the tropics and intolerably cold at night or in the Polar regions. However, these winds do not distribute heat or moisture uniformly – which is why we have some parts of the earth quite hot, some parts cooler and some parts with high rainfall and some which are deserts.
Answer:
Planetary winds are winds that are created in the different Global circulation cells.

These winds transport heat and moisture across the world. But the winds do not distribute heat or moisture uniformly.

Question 13.
Collect the newspapers from July to December and note down the news related to extreme rainfall in different parts of country.
Answer:
Average annual rainfall of the states of India

2. Particulates may come from natural processes such as sand storms over deserts and natural forest fires and from human activity such as burning forests, burning petroleum and industrial emissions.

Question 2.
In which layer is the life present? (Text Book Page No. 39)
Answer:
In troposphere the life is present. The suitable conditions that make life possible in the troposphere are :

Question 3.
About which layer do we have very less knowledge? (Text Book Page No. 39)
Answer:

Question 4.
Which layer of the atmosphere is ideal for flying jet aircrafts? Why? (Text Book Page No. 39)
Answer:

Question 5.
Our skin dries up more during winters. Why?
Answer: 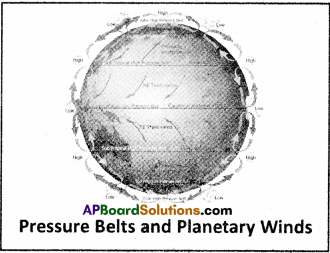 Question 7.
What will happen if water vapour is not present in air?
Answer:
1. The condensation of water vapour to the liquid or ice phase is responsible for clouds, rain, snow and other precipitations.

If water vapour is not present in the atmosphere, clouds, rains, snow will not occur. If there is no rain, life will not be possible on earth.

The green house effect keeps the Earth’s surface about 33°C warmer thair-it would otherwise be.

Question 8.
Why is atmosphere important for us?
Answer:

Question 9.
Can you imagine why life is not possible on the Moon? (Text Book Page No. 37)
Answer: