Question 1.
Why does the government need a budget? Why does the budget talk of taxes?
Answer:

Question 2.
What is the difference between income tax and excise duty?
Answer:

Question 4.
You are expected to pay taxes on steel, matches, clocks, cloth, iron ; a tax increase on which of these would affect the prices of other commodities the most and why?
Answer:
The taxes on iron and steel increase or affect the cost of other goods because they are intermediate goods.

Question 5.
Ordinary food items, such as grain, pulses, oil are used by all. Then why is it said that imposing tax on them will have a greater effect on the poor?
Answer:

Question 6.
A group of four friends decided to stay together by contributing money towards the rent of a house. The rent was rupees 2000 per month.
• How could this be shared among them?
• We also know that two of them earned Rs. 3000 rupees per month and the other two Rs. 7000 per month. Is there some other way of sharing the cost so that each one of them feels the same pinch?
• Which way of sharing would you prefer and why?
Answer:
1. One method of sharing the rent is the distribution of the rent equally among all the four members. Then each one has to pay Rs. 500/- (i.e. 2000/4 = 500).

Question 7.
Tax on income or tax on commodities. Which of the two affects the rich more and which affects the poor more? Explain with reasons.
Answer:

Question 8.
How would VAT reduce the evasion of taxes on goods?
Answer:

Question 9.
What is the difference between Excise duty and Customs duty?
Answer:

Question 10.
Is there any hike in the bus fares recently? If so, try to know the reasons for it.
Answer:
1) It was directly related to the fact that there was a hike in the price of petroleum (product both petrol) and diesel. As price for petrol and diesel has increased nearly 45 times past 2 – 3 months it has come around with a difference of approximately 4 Rs. per liter.
2) So, as to balance this gap and the loss incurred by this the bus fare had been hiked by 40 paisa per kilometer.

Question 11.
Read the paragraph under the heading ‘Direct Taxes’ (Income Tax is charged only for…) and answer the following :

Question 12.
What is the effect of black money on our economy?
Answer:

Question 13.
Bring a few wrappers of soaps, toothpastes, tablet strips or any other things of daily use which contain MRP Discuss the rate mentioned and the rate at which they are so!d. Talk about the profit that the retailer gets.

Answer:
Please scan the some of the wrappers of Biscuits, toothpaste, soaps, etc. with MF The MRP that are printed on the wrappers are fixed by the manufactures. The Manufactures incude the cost of production, tax, VAT, commissions, transportation cost and profits etc. From them retailer bought the goods on wholesale and he mix up again transportation cost, tax, vat and his profit. In that retailer get more profits because he bought the good with low cost he sold more cost. Again he mix up the VAT & Tax also profit to him.

Question 1.
Can you guess from where does the government get money for pubficfacilitiesand other activities? (Text Book Page No. 132)
Answer:
Government raises the revenue required to meet expenditure. The following are the types of revenue of government.

Question 4.
You might think it would be fair for everyone to pay the same amount of tax. Consider the following three prople : (Text Book Page No. 139)

Would it really be fair if each of the three people has to pay the same amount? If Jyoti cannot even afford to feed her children properly, is it fair for her to pay 50 rupees as tax?
Answer:

Question 5.
You might think it would be more fair to ask each person to pay a certain pecentage of what they earn as tax. Supposing everyone paid 10% in taxes, calculate how much each person would pay? (Text Book Page No. 139)

Question 6.
To make taxes more fair you might then say only the people earning more than a certain amount say Rs. 7000 per month have to pay taxes. You might also say that the richest people should pay greater proportion of their earnings as taxes. For example

Calculate how much each person will pay. (Text Book Page No. 139)

Would this be fair?
Answer:

The above taxation satisfies the principle that the richest people should pay greater portion of their earnings as taxes.

Hence this method is the fair way of taxation.

Question 7.
With the help of this pie chart, answer the following questions.
Expenditure of the Government (Center and States), in 2011-12 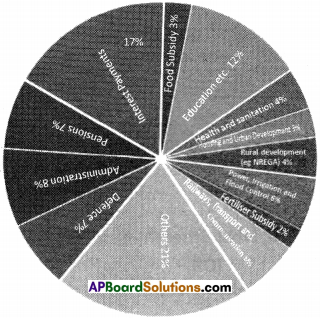 2. Discuss on what all was this money spent and the purpose for this?
Answer:

Question 8.
Relate some of the expenditure in the pie-chart to the roles played by the government. (Text Book Page No. 134)
Answer:
Roles of government and expenditure spent

Question 9.
Collect and list out some details of government expenditure from reading the newspapers of your region. (Text Book Page No. 132)
Answer:

Question 10.
If the tax on iron is increased, what other things will this affect? Give some examples. (Text Book Page No. 136)
(OR)
Explain the example given in below picture. Write the relationship between indirect taxes and consumers. 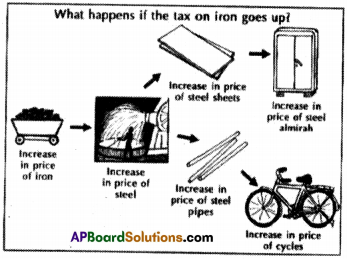 Answer:
Taxes Collected by the Government

1) Which kind of taxes generate more revenues for the government?
Answer:

Question 12.
In your city/town/village, what are the roles that you have seen the government playing? Discuss. (Text Book Page No. 132)
Answer:

Question 13.
In the year 1947-48, the budget for independent India was only Rs. 197 crores. What could be the reasons for such an increase in the budget since then? (Text Book Page No. 134)
Answer:

Question 13.
Why do you think has the Parliament been given power over the government’s budget? (Text Book Page No. 134)
Answer:

Question 14.
Petrol, diesel, etc., are used to run vehicles, motor pumps, generator sets etc. What will happen if the tax on diesel and petrol goes up? (Text Book Page No. 135)
Answer:

Question 14.
What is your opinion about value added taxes? Discuss. (Text Book Page No. 138)
Answer:

Question 15.
If there are two people manufacturing the same goods and one of them evades paying taxes, what advantages could he/she get over the other? (Text Book Page No. 136)
Answer:
The margin of his/her profit may go up.

Question 16.
There have been continuous attempts by the government to reduce fertiliser subsidy. This means that the government would no longer control the price of fertiliser. Farmers would have to buy fertilisers at higher market prices. At present, the government has to pay (compensate) the fertiliser producing companies for the losses that they make. Once fertiliser subsidy is removed, it is said this would make space for other important expenditures in the government budget. Some also argue that subsidised fertiliser does not benefit the small farmer but only encourages the large farmers to overuse it.
Imagine you are a farmer using fertilisers in farming, and you genuinely believe that the farmers need subsidized fertiliser. How would you argue your case? Write a
letter to the Finance Minister. (Text Book Page No. 134)
Answer: