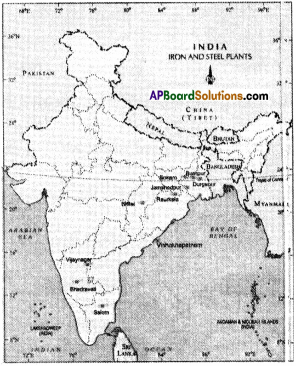 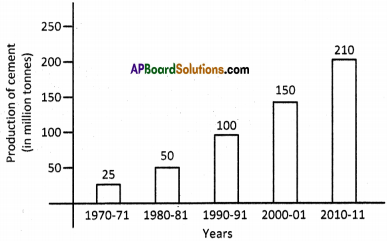 Question 2.
The pie charts below show the percentage of people employed in Agriculture. Industry and service sectors. Read the pie charts carefully to answer the question.

Answer the following Questions.
1. What does the above given graph denotes?
2. What is the percentage of change in employment by industry when compare between 1972-73 and 2009-10?
3. Which sector generated highest employment in 2009-10?
4. Write any two occupations regarding service sector?
Answer:

At the same time industrial activities are increasing environmental pollution by the following ways.

Question 3.
Mixing of some poisonous substances in air, water and soil causes to ‘ecological crisis’ – give your suggestions to prevent this problems as a student. (SA-II : 2017-18)
Answer:
Pollution prevention is a major global concern because of the harmful effects of pollution on a person’s health and on the environment.
Suggestions:

Conclusion :
Breathing is life. We know that we will survive without food for several weeks and without water for few days, but without oxygen, we will die in a matter of minutes.

The oxygen, the air we breathe sustains us. So, let us make today and every day a good day for everyone.

Read the above pie chart and answer the following questions. (SA-II : 2017-18)
1. What does the pie chart tell us?
2. Which sector provide the highest percentage of employment?
3. In which sector employment increased twice?
4. By 2009-10 which sector was the second piace in empioyment?
Answer:

Question 1.
Why are the infrastructure facilities important in establishing industries?
Answer:

Question 2.
Why are industries important?
Answer:
In industrial sector, the raw materials are worked upon by people and changed using tools and machines to produce a good that can be useful.
The importance of industries :
i) Industries provide a wide range of products :
There are plenty of goods made in factories. Ranging from paper and other stationery, fridges to cars, batteries, bulbs and other electrical appliances.

ii) Industries are expected to employ a large section of people looking for jobs :

Question 3.
What were the restrictions introduced by the government during the early years of industrialization?
Answer:

All these restrictions were introduced keeping in view the welfare of the people.

Question 4.
Industrial policies of the early years became hindrance to the growth of industry. Explain.
Answer:

ii) Employment has increased but less than expected:
Both small and large scale employ nearly about one-fifth of India’s 460 million workers.

v) Increase in environmental problems, land conflicts and pollution:
These industries release a lot of waste materials into the atmosphere and into the tanks and wells causing lots of air pollution and damaging water resources. The air pollution is causing skin diseases and respiratory diseases.

Question 6.
At the time of independence what were the objectives that were desired to be achieved through industrialization?
Answer:

Question 10.
Where are the silk textile industries located in Jammu and Kashmir?
Answer:
In Baramula, Srinagar and Anantanag.

Question 11.
What are the basic requirements of industrialization?
Answser:

Question 12.
What factors influence the selection of an industrial location?
Answer:

Question 14.
Why do you think cotton textile industry is concentrated in Maharashtra and Gujarat?
Answer:

Question 15.
Read the following passage and answer the questions given below.

1) What is the industry mentioned in the above passage?
Answer:
Jute industry.

5) To stimulate demand, the products need to be
Answer:
diversified.

Question 16.
Discuss what is meant by the word “basic”? What are the basic necessities for industries?
Answer:

Question 17.
Today West Bengal is the dominant state in Jute Industry. How is it able to become like that?
Answer:

Question 18.
Name the problems that are faced in the Iron and Steel industry?
Answer:

Question 19.
Locate the following industrial cities on the outline map of India. City 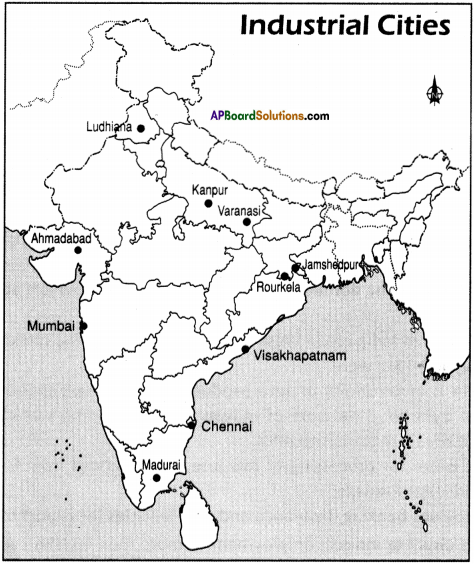 Question 20.
Observe the following map and answer the questions given below. 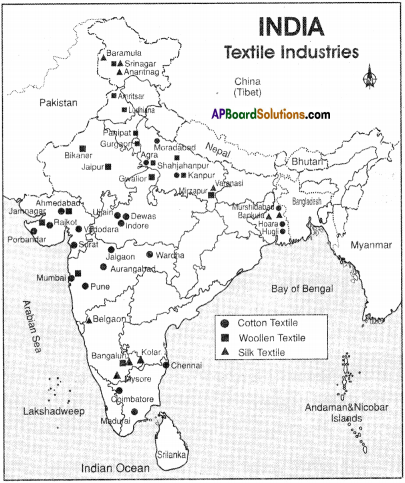 1) Where do you find both cotton and woollen textiles?
Answer:
In Ahmedabad and Kanpur.

2) What is the South India state famous for silk textiles?
Answer:
Karnataka.

5) Where are the silk textile industries located in Jammu and Kashmir?
AIn Baramula, Srinagar and Anantanag. 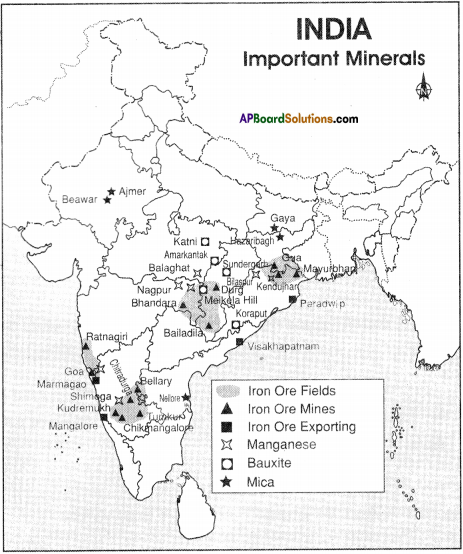 Now answer the questions given below.
1) What are the minerals mentioned in the map?
Answer:
Iron ore, manganese, bauxite and mica.

2) In which states do you find iron ore mines?
Answrr:
Maharashtra, Karnataka, Odisha and Chattisgarh.

4) Where can we find mica in Andhra Pradesh?
Answer:
In Nellore.

5) What is the mineral found in Rajasthan?
A. Mica. 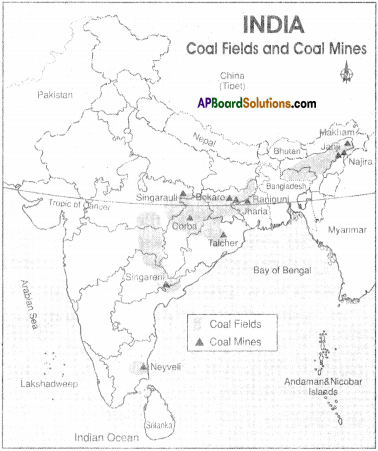 Now answer the questions given below.
1) Which state is Raniganj coal mine located in?
Answer:
West Bengal

2) Where is the coal field located in Tamilnadu?
Answer:
Neyveli

3) Name the important coal mine of Telangana.
Answer:
Singareni

4) What is the coa! field that belongs to Chattisgarh?
Answer:
Korba

Question 23.
What steps are to be taken to reduce the problems of pollution?
Answer:

Question 24.
What measures would you suggest to overcome the problems of Textile Industry?
Answer:

Question 25.
What suggestions would you make to improve jute industry?
Answer: