Question 1.
Prepare two slogans to support the protection of the environment. (SA-III : 2015-16)
(0R)
Write two slogans on the prevention of environmental pollution.
Answer:

Question 2.
Write any two programs on the prevention of environmental pollution to aware people. (SA-II : 2017-18)
Answer:

Question 2.
When human beings began to practise agriculture and animal husbandry, they began to change the environment even more. The building of cities and the use of metals like bronze and iron further change human interaction with the environment.
Q: Is development causes to environment pollution? “comment on it. (SA-II : 2016-17)
Answer:
1. Establishment of Industries :
Industries are the important to economic development of any country but they release green house gases causes to environment pollution.
Ex : Transportation of petrol through pipe lines, if there is a leak in the pipe line, soil will automatically be polluted.

2. Transportation :
Each and every person has a own vehicle which is run by petrel, diesel or gas. This is the significance of development of our country. At the same time pollution will arise with these vehicles.

3. Agricultural Activities :
To increase production in foodgrains we are following green revolution methods. But these methods are responsible for the contamination of water and soil.

4. Trading Activities :
Trading activities including the production and exchange of goods and services. Concerning goods, pollution can be caused by packaging (which often involves the use of plastic which is made from fossil fuels) or transport, mainly.

Example 1 :
Vultures feed upon dead animals like cattle. However, people started noticing that Vultures have virtually disappeared and are sighted very rarely. Finally, they found that farmers use a particular chemical called Diclofenac to treat cattle. When the cattle die their flesh retains. This Chemical when their flesh is consumed by vultures, diclofenac leads to kidney failure in them and they die within a week or so. In this way vultures have come very close to extinction.

Example 2 :
The disturbance caused by mixing of some poisonous substances in air or water or soil the metals.like mercury are consumed by micro-organisms in water and in turn become the food of a large number of fishes when human beings consume these fishes they too absorb quantities of mercury that are detrimental to their health.

Question 2.
What is Greenhouse effect?
Answer:

Question 3.
Write the names of major Greenhouse gases and their sources.
Answer:

Question 4.
How do you think acid rains will affect natural vegetation and crops?
Answer:

Question 5.
How does the release of mercury into the streams and rivers affect us?
Answer:

Question 6.
What is meant by ‘Biosphere’?
Answer:
According to many geographers, life itself constitutes a separate sphere called ‘biosphere’.

Question 9.
Write the reason of acid rains.
Answer:
Acid rains are caused by the mingling of acidic particles of the atmosphere with the rain by increasing the acid content of rain water.

Question 10.
How is mediterranean climate and vegetation are different?
Answer:

Question 12.
What are Savannahs?
Answer:

Question 13.
What is tundra type of vegetation?
Answer:

Question 14.
How does the chemical “diclofenac” affect vultures?
(Or)
Why is the population of vultures decreasing?
Answer:

Question 15.
How are industries polluting our environment?
Answer:

Question 16.
How does new agriculture affect our environment?
Answer:

Question 18.
What are the impacts of Global warming?
Answer:
Concentration of green house gases raise the temperature of the earth. This is known as Global warming.

Question 19.
“Various forms of life are not only related to the three spheres around them but also to each other”- Interpret the statement.
Answer:

Question 20.
“Any disturbance in the life cycle can create an ecological crises” – Explain the statement.
Answer:

Question 21.
“Since all living and non-living things on earth are in one way or other connected to each other, changes affecting one affects all others too” – Interpret the above statement.
Answer:

Question 22.
“Such intense human industrial activity has had profound impact on the air, water and the land around us” – Interpret the above statement.
Answer:
A) Impact of industries on atmosphere :

B) Impact of industries on water:

C) Impact of industries on soil:

Thus intense human industrial activity has had profound impact on the air, water and the land around us.

Question 23.
Read the paragraph under the title “In addition to and soil” on page 57 and comment on it.
In addition to burning of fossil fuels, modern industries release enormous amounts of waste materials in the form of solid, liquid and gaseous waste contaminating air, water (both surface water like rivers and underground water of wells) and soil.
Answer:

Question 24.
“Scientists believe that the earth’s climate is being altered due to changes in atmosphere known as the greenhouse effect. The greenhouse effect is particularly significant in the polar regions of the Arctic and Antarctic. On the Antarctic peninsula temperatures have been recorded as increasing two to three times more quickly than the rest of the Earth”- Form a question after reading the above passage.
Answer:
How does the greenhouse effect in the polar region affect the atmosphere and hydrosphere? How can it be a cause of concern for the low lying areas and islands?

Question 25.
“All small islands and low lying areas will be jeopardized. If global warming is allowed to progress, some of the northern Hawaiian atolls already been submerged by ocean water. Waikiki, Manhattan and New Orleans are good examples of major cities within the United States that may be at the risk of flooding” –
After reading the above passage, form a suitable question on the above discussed issue.
Answer:
Why is Hawaii in danger?

Question 26.
“Characterized as containing harmful levels of sulphur dioxide or nitrogen oxide, acid rain is damaging and potentially deadly to the earth’s fragile ecosystems; a pH – of 2.4 has been measured in rainfall in England” –
Read the above passage and form a question on the above discussed issue.
Answer:

Question 27.
If your acquaintant is now on a tree cutting spree, how would you stop him?
Answer: 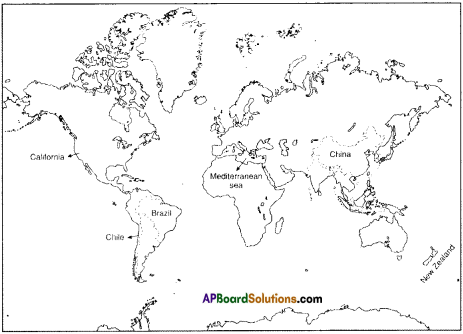 Question 29.
Can you name the great desert of India? Name some of the common animals of the desert which you have learnt earlier.
Answer:

Question 30.
Establish the dependence of Biosphere on the remaining realms?
Answer:

Question 31.
How do you preserve your Mother Earth?
Answer: