(SA-I: 2019-20)
a) Water distribution on earth
b)Fresh water consumption by humans
a) What percentage of the total water on the Earth is available for consumption?
Answer:
0.75% or 2.5%

b) Which activity of humans need maximum water?
Answer:
Agriculture. 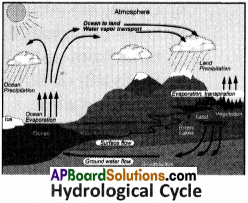 Answer:
There are six stages of water cycle. They are –
a) Evaporation :

f) Groundwater :
Under special circumstances, groundwater can even flow upward in artesian wells.

Read the above table and answer the following questions. (SA-II: 2017-18)
1. Which ocean is also known as Southern Ocean?
2. Which ocean separate the America from Europe and Africa?
3. Which continents are separated by the Indian Ocean?
4. What are the land masses in Oceania?
Answer:

Question 1.
What is an Ocean? Write a brief essay on the ocean.
Answer:
The huge water bodies are called Oceans. There are five oceans on the earth. They are the Pacific ocean, the Atlantic ocean, the Indian ocean, the Southern (Atlantic) ocean and the Arctic ocean.

The ocean basins are in many ways similar to the land surface. There are submarine ridges, plateaus, canyons and terraces. Ocean floor is simply divided into four layers. They are continental shelf, continental slope, deep sea plain and oceanic deep.

Ocean water is salty. Most of the salt in the oceans comes from land. Over millions of years rain, rivers and streams have washed over rocks containing the compound Sodium Chloride and carried into the sea. The total content of dissolved salts in sea water is called salinity. It is usually expressed as parts per thousand (PPT). Average salinity of the oceans is 35%0. The salinity of ocean water depends mainly on evaporation and precipitation.

The little variations in ocean temperature show great effect on land temperatures. South west monsoon in India is affected by ‘El Nino’ and ‘La Nino’. These are the effects caused by the changes in temperature in the Pacific ocean. Normally, the temperature in oceans varies from – 2°C to 29°C.

Thus without oceans Ijfe of man is impossible.

Question 2.
Describe the salinity of the oceanic water.
Answer:

Question 4.
What are the ocean currents? How are they formed?
Answer:
1. The general movement of a mass of water in a fairly defined direction over great distance is called ocean current.

2.Causes that lead to the formation of ocean currents are :
a) Centrifuge! Force :
The centrifugal force at the equator is greater than that at the poles. The variation of these forces makes the equatorial water to move towards the poles.

b) Effect of Winds :
The stresses due to wind and the wind movement modifies the the theoretical direction of currents. Due to the frictional gliding of winds water is dragged along the wind direction. Thus a 50 miles per hour wind will produce a current whose velocity is 0.75 miles per hour.

c) Effect of Precipitation :
Since the level of sea is higher water moves north and south from the equator.

d) Effect of Solar Energy :
Heating by solar energy causes the water to expand near the equator. Hence near the equator the ocean water is about 8 cm higher in level than in the middle latitudes. This causes a very slight gradient and water tends to flow down the slope.

Question 5.
How are the oceans useful to mankind?
Answer:

Question 6.
Why is the earth called the blue planet?
Answer:

Question 7.
What is the importance of continental shelf?
Answer:

Question 8.
What are Oceans?
Answer:
The huge water bodies are called Oceans.

Question 9.
What is ocean current?
Answer:
The general movement of a mass of water in a fairly defined direction over great distance is called ocean current. –

Question 10.
What is meant by evaporation?
Answer:
Evaporation: The process by which water changes from liquid to gas by using sun’s energy is called evaporation.

Question 11.
What is meant by transportation?
Answer:
Transportation:
The movement of water through the atmosphere specifically from over the ocean to land in the form of clouds is called transportation.

Question 12.
Where do we find trenches? What is their significance?
Answer:

Question 13.
Which part of ocean floor is suitable for building seaport? Why?
Answer:

Question 14.
Do you think the rain we get is in any way related to hydrological cycle?
Answer:

Question 17.
Write about the classification of Ocean currents.
Answer:
1. Ocean currents may be classified on the basis of temperature as –
(a) Cold Currents
(b) Warm Currents

2. Ocean currents may be classified on the basis of speed as –
(a) a stream
(b) a drift

Question 18.
“From ail the sources of water reaching the earth, less than 1% of water is useful to man” – Interpret the statement.
Answer:
Of the total volume of water on earth only 2.75% is fresh water. Most fresh occurs in the form of permanent ice, snow locked up in the Antarctica and Arctic and in the mountain regions. The principal sources of water for human use are lakes, rivers, soil moisture and relatively shallow ground water basin. The usable portion of these sources is only about less than 1% of all fresh water.

Question 20.
in which ways oceans are being exploited by us, today?
Answer:

Question 21.
Usually oceans have salinity of 35%. But being part of Atlantic ocean, how come Baltic sea has salinity of 3-15%?
Answer:

Question 22.
Lake Van of Turkey experiences harsh winters with -300C. Why do you think its water never gets freezed?
Answer:

Question 23.
The table below shows the descending order of the oceans in terms of size.

1) What is the largest ocean on the earth?
Answer:
The Pacific ocean.

2) Which ocean is considered as the extension of three important oceans?
Answer:
The Antarctic ocean.

3) What is the smallest ocean on the earth?
Answer:
The Arctic ocean.

4) Which ocean separates America from Europe and Africa?
Answer:
The Atlantic ocean.

5) Where is the Indian Ocean?
Answer:
To the South of Asia.

Question 24.
“The activeness of South west monsoon in India is affected by El Nino and La Nino”. Prove the statement.
Answer:

Question 25.
Can you say what the temperature at the foot of the Pacific ocean is?
Answer:

Question 26.
“The government of Maldives held its first underwater cabinet meeting at a depth of 20 feet off the coast just north of the capital Male. Maldives wanted to attract the attention of the world to the dangers of global warming and sea-level rise. This is a matter of great concern not only for the Maldives but also for all the countries in the World”.
Basing on the information given above – frame a thought provoking question on the issue.
Answer:
What are the causes that lead to the sea level rise ? What should we do to prevent it?

Question 27.
Why do we call the earth as blue planet?
Answer:

Question 28.
Without oceans life of the man is impossible. Discuss it.
Answer:

Hence life of the man is impossible without oceans. 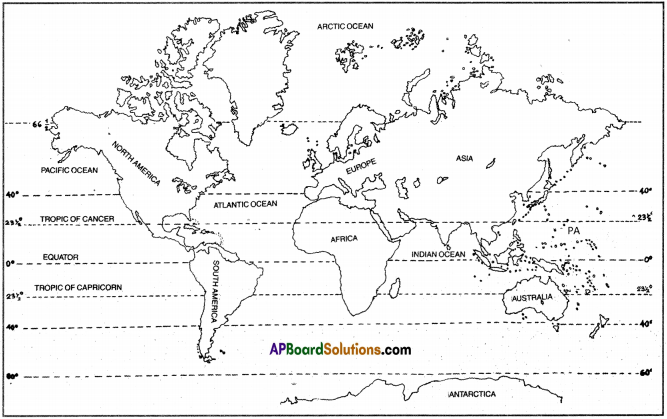 3) Which is the ocean that encircles Australia?
Answer:
Pacific ocean.

4) Which ocean is there to the south of India?
Answer:
Indian ocean.

Question 30.
Locate the following oceans in the world map given below.
1) The Pacific ocean
2) The Atlantic ocean
3) The Indian ocean
4) The Arctic ocean
5) The Antarctic Ocean
6) The Baltic sea
7) The Red sea 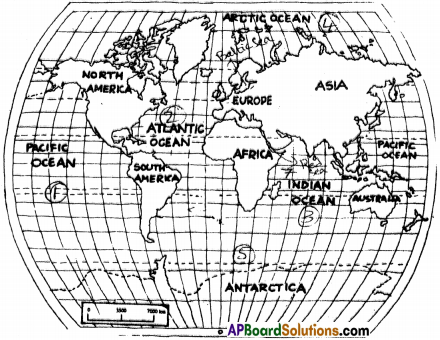 India receives rainfall due to these currents.

Question 32.
Without oceans life of man is impossible. Discuss it.
Answer:
Throughout the history man is directly or indirectly influenced by the oceans. Oceans have many uses for man.

There are many more uses for man from oceans. Hence we can say without oceans life of man is impossible.