These AP 9th Class Physical Science Important Questions 5th Lesson What is inside the Atom? will help students prepare well for the exams.

9th Class Physical Science 5th Lesson What is inside the Atom? 1 Mark Important Questions and Answers

Question 3.
Write an application of isotopes in the field of medicine.
Answer:

9th Class Physical Science 5th Lesson What is inside the Atom? 2 Marks Important Questions and Answers

Question 1.
What is valency? Write valency of hydrogen.
Answer:

Question 2.
Observe the table given below.

9th Class Physical Science 5th Lesson What is inside the Atom? 4 Marks Important Questions and Answers

Question 1.
Fill the blanks in the table using the given information. (Isotopes are not included).

Question 2.
Fill in the missing information in the table given below.

Question 4.
a) Draw neat diagrams indicating the nucleus and arragement of electrons in different shell for the following elements?
i) Helium
ii) Carbon
iii) Argon
Answer:

b) Which of the above element is unstable? Why?
Answer:
Carbon is unstable. The nudes of carbon-14 atoms are unstable because they have too many neutrons relative to protons, so they gradually decay.

9th Class Physical Science 5th Lesson What is inside the Atom? Important Questions and Answers

9th Class Physical Science 5th Lesson What is inside the Atom? 1 Mark Important Questions and Answers

Question 6.
Who proposed rules for electron distribution in an atom?
Answer:
Bohr and Bury.

Question 7.
What is the first rule of Bohr and Bury for electron distribution in an atom?
Answer:
The maximum number of electrons present in a shell is given by the formula 2n², where ‘n’ is the shell number, which takes values 1, 2, 3, 4,

Question 8.
Write the second principle of Bohr – Bury.
Answer:
Each energy level or electron shell is further divided into sub-shells. The maximum number of electrons that can be accommodated in each shell is 8.

Question 9.
Write the third law of Bohr – Bury.
Answer:
Electrons cannot be filled in a given shell unless the inner shells are completely filled i.e., shells are filled in step-wise manner.

Question 10.
What is an octet?
Answer:
An outermost shell which has 8 electrons is said to possess an octet.

Question 13.
On the basis of Thomson’s model of an atom, explain how the atom is neutral as a whole.
Answer:
The negative and positive charges are equal in magnitude are present in atom. So, the atom as a whole is electrically neutral as whole according to Thomson model.

Question 14.
On the basis of Rutherford model of an atom, which sub-atomic particle is present in the nuclear of an atom?
Answer:
α – particles are repelled by the nucleus. So it contains positive charged particle that is proton.

9th Class Physical Science 5th Lesson What is inside the Atom? 2 Marks Important Questions and Answers

Question 1.
What are the postulates of Thomson’s model of the atom?
Answer:
J.J. Thomson proposed a model of atom in 1898. The main postulates are

This model is commonly known as plum pudding model or watermelon model.

Question 2.
What are the features of Rutherford’s model of atom?
Answer:
In 1909, Rutherford proposed a model of atom based on the alpha particle scattering experiment. The main features are

This model failed to explain the stability of atom.

Rule – 2 : Each energy level or electron shell is further divided into subshell. The maximum number of electrons that can be accommodated in each subshell is 8.

Rule – 3: Electron cannot be filled in a given shell unless the inner shells are completely filled.

Step -1 :
The K-shell can accommodate maximum 2 electrons, so the first 2 electrons fill the shell of n = 1.

Question 5.
Fluorine atom contains 7 electrons in the outermost shell. But its valency is ‘1’. Explain.
Answer:

Question 6.
What is the importance of valency?
Answer:
1) An atom with 8 electrons or an octet in their outer most shell is chemically stable or does not combine other atoms.
Ex : Ne, Ar, etc.

2) An atom with duplet or 2 electrons in its outer most shell is also more stable when there is only one shell present in it.
Ex : He

3) Atoms of an element thus react with other atoms. So as to achieve an octet in their shell.

4) When elements reacts to form compounds, their atoms must be combining in such a way that they can attain the stable electron distribution of noble gases or inert gases.

Question 7.
How can an atom achieve octet?
Answer:
An atom can achieve an octet by two ways.

Question 9.
Define isotope and give two examples.
Answer:
Isotope :
The atoms of the same element which have the same number of protons but have different number of neutrons are called isotopes.

Question 14.
What do you think would be the observation if the a – particle scattering experiment is carried out using a foil of metal other than gold?
Answer:
Gold has highest malleability and ductility. Extremely very thin foil can be prepared by using Gold, which is not possible with other metals. So, we will not get same type of results using other metals.

Question 15.
Helium atom has an atomic mass of 4u and two protons in its nucleus. How many neutrons does it have?
Answer:
Atomic mass due to protons = 2 × 1 = 2 u
Neutrons have almost same mass as protons.
Mass of neutrons = 4 – 2 = 2u
∴ Number of neutrons = 2

Question 19.
Chlorine occurs in two isotopic forms that is \({ }_{17}^{35} \mathrm{Cl}\) and \({ }_{17}^{37} \mathrm{Cl}\). The percentage of these forms are 75% and 25% respectively. Find atomic weight of chlorine atom?
Answer:
The atomic mass of an element is taken as an average mass of all the naturally occurring atoms of the sample element.
The average atomic mass of chlorine atom on the bases of above data

Question 20.
For the symbol H, D and T tabulate three sub atomic particles found in each of them.
Answer:

Question 25.
Composition of nuclei of two atomic species X and Y are given as under.

9th Class Physical Science 5th Lesson What is inside the Atom? 4 Marks Important Questions and Answers

Question 1.
How did the idea of sub-atomic particles evolve?
Answer:

Question 2.
How do we determine the atomic mass of an element with its isotopes?
Answer:

Question 3.
Describe the Rutherford’s alpha particle scattering experiment. What are the conclu¬sions of this experiment.
Answer: 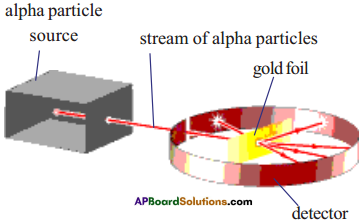 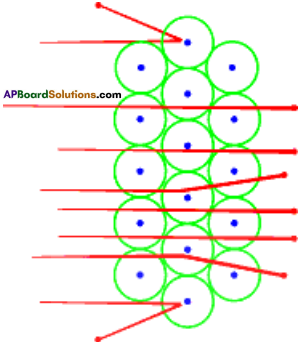 h) Valency is ‘l’.
i) It gains one electron to become octet.