Question 1.
What is the importance of different biogeochemical cycles in the nature? (AS 1)
Answer:

Question 2.
What do you understand by Ozone layer? Write an essay to participate in elocution competition on importance of ozone layer. (AS 6)
Answer:
Ozone is concentrated in a layer in the stratosphere, about 15-30 kilometres above the earth’s surface. Ozone is a molecule containing three oxygen atoms. It is blue in colour and has a strong odour.

Significance of ozone layer :
Even the small amount of ozone plays a key role in the atmosphere. The ozone layer absorbs a portion of the radiation from the sun, preventing it from reaching the planets.
Most important of all it absorbs the portion of ultra violet light which causes many harmful effects including various types of skin cancer and harm to some crops, certain materials and some forms of marine life.

Ozone depletion :
Certain industrial processes and consumer products results in the emission of ozone depleting substances to the atmosphere. Chlorofluoro carbons used in almost all refrigeration and air conditioning systems destroy ozone layer. The ozone hole is not really a hole, but it was observed that there is less ozone in Antarctica than in arctic region.

Conservation of ozone layer :
The discovery of an ozone hole over Antarctica prompted action to control the use of gases which have a destructive effect on the ozone layer. From this concern emerged the Montreal protocol on substances that deplete the ozone layer signed by 24 countries in 1987.

Measures to control these gases :

Question 4.
Why could we say that biogeochemical cycles are in “balance”? (AS 1)
Answer:

Question 5.
What role does carbon dioxide play in plant life processes? (AS 7)
Answer:

Question 6.
If all the vegetation in the pond died, what effects would it have on the animals? Why? (AS 2)
Answer:

Question 7.
Burning of fossil fuels a concern for scientists and environmentalists. Why? (AS 6)
Answer:

Question 8.
How human activities caused an imbalance in biogeochemical cycles? (AS 7)
Answer:

Question 9.
List three ways we, as humans, have affected the water cycle. (AS 7)
Answer: 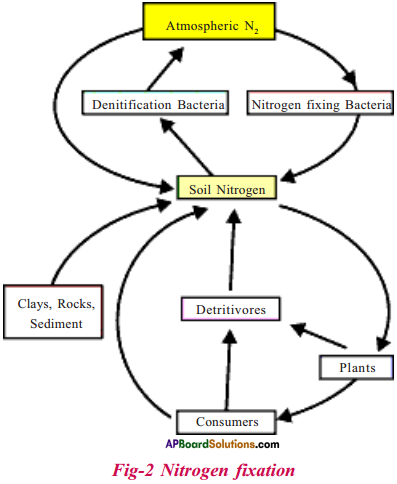 Question 11.
Go to a nearby pond observe organisms living in the pond and biodegradable substances mixing in water. How they effect on those organisms? Write your observation. (AS 4)
Answer:

Question 12.
Prepare an article for newspaper on the item “How human activities effects the environment”. (AS 7)
Answer:
When the human population was smaller, people lived in small communities, so the effects of their activities were small and localised. A rapid increase in the human population and increase in the standard of living have lead to wide spread damage of the environment.

Question 1.
Aim :
Test the effect of a green house on temperature.

Answer the following questions :
1) Do both thermometers record the same temperature?
Answer:
No.

2) If not, which one is higher?
Answer:
The thermometer kept in the plastic bottle shows higher temperature.