c) Popular games amongst the people in Tundra are closely related to their daily lives.
Answer:
True

d) Contact with people from outside impacted their health.
Answer:
True

Question 2.
Based on what you studied about equator regions in Class VII, how is polar region different?
Answer:

Question 3.
What are the ways in which life of people in Tundra are dependent on climate of the region? Describe in the context of following aspects:

Answer:
Climate influences the people of the Tundra.

Question 4.
In this chapter there are many aspects that are very different from the place where you live. Look at the subheadings in this chapter and make a list of them. Now create a wall paper with illustrations and descriptions comparing life in your location with that in the Tundra.
Answer:
The comparison between the life of the people of N. polar region and that of the people of the equatorial region 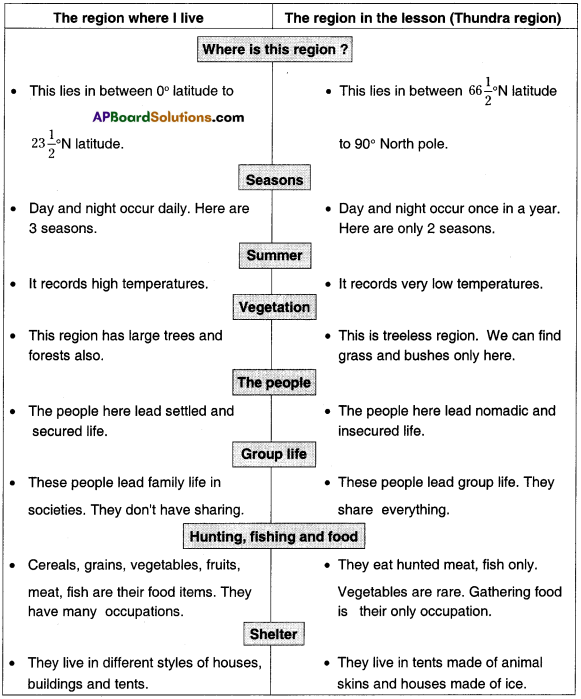 Question 5.
Imagine one entire day (24 hours) when the Sun does not set and another day when there is no Sun. What changes will you make in your daily lives ? Write a short note on them.
Answer:
When the Sun does not set: We should shut all the doors and windows of our house and make it dark to sleep. Rest of the day will be okay.
When there is no Sun: We should arrange lights probably flood lights to get light everywhere. Then we should perform our daily works.
This is possible for only one day.

Question 6.
Find out the five living places of Eskimos in the world map
Answer:
Greenland, Alaska, Canada, Siberia, Lapland are the five places shown in the below map. 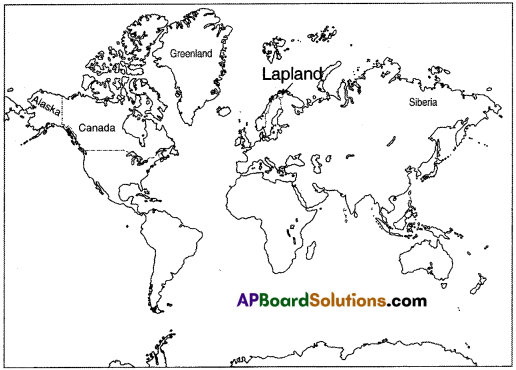 Question 3.
Mention five points about the summer in Tundra. (Textbook Page No. 42)
Answer:

Question 4.
Fill in the blanks : (Textbook Page No. 42)
1. The Sun does not appear during the month of November, December and January.
2. At this time, the water freezes and the plants cover with the snow.

Question 5.
How do the people of Tundra get light in winter ? (Textbook Page No. 42)
Answer:
There will be no sunlight during the winter in the polar region. At this time, the light of stars
falls on the ice, reflects, and fills the region with bright colourful lights. These are known as ‘Aurora Borialisis’. During winter they get light with these Aurora borialisis, oil and fat lamps.
In what ways are the resources available in their surroundings used for making houses? (Textbook Page No. 45)

Thus they use available resources in the surroundings.

Question 7.
Look at the pictures in this chapter (The Polar Region). How has that dress and hunting changed? (Textbook Page No. 48)
Answer:
The people of the earlier times wore raw skins of animals. They are too heavy. They use the horns of animals, harpoons, sharp edged instruments to hunt.
In the modern times they wore designed caps, dresses which are light in weight. Guns occupied the place of traditional weapons.

Question 8.
Why do you think people probably always did not live in the Tundra region? (Textbook Page No. 43)
Answer:
There are no seasons or seasonal differences in tundras. They have likely temperatures and seasons. They face nominal summers. So they cannot cultivate crops here. They have no tasty foods and different kinds of foods. During winters the whole region becomes dark, deserted and desolate. So they did not live here throughout the year.

Question 9.
How is the house impacted by the climate? (Textbook Page No. 45)
Answer:
Their houses are called igloos. In summer, most Eskimos live in tents made of animal skins. In some areas, they made tents of wood and animal skins. They use logs and whale ribs also for this. They use stone slabs in some areas. Snow houses are made from blocks of packed snow, built into a dome. They build snow platforms for their sleep. As the area is covered with snow they cannot lay foundations and they cannot lead a settled life. Thus the house is impacted by the climate.

The pattern of relations between the Eskimos and outsiders has been described as “boom and bust”. Waves of outsiders have brought brief periods of wealth, education, and employment. This was followed by periods of poverty and disorganisation. Peak periods have been those of whaling (1859 to 1910), the modern fur trade (1925 to about 1950), the building of military and defence bases (the mid-1950s), the building of urban centres (mid- 1960s), and oil exploration and development (the 1970s).

Each wave of activity has drawn the Eskimos into contact with different social and economic forces. The once isolated northlands have been opened up by air travel, highways, powerful modern ships, and satellite communications. These changes have produced great strains on the Eskimo way of life.