Question 2.
Give brief explanations for the following by reading the lesson:
a) The Parsis were the first Indian community to set up a cricket club in India.
b) The significance of the shift of the ICC head quarters from London to Dubai.
Answer:
a) The origins of Indian cricket, that is, cricket played by Indians are to be found in Bombay and the first Indian community to start playing the game was the small community of Parsis. Brought into close contact with the British because of their interest in trade and the first Indian community to westernise, the Parsis founded the first Indian cricket club, the Oriental Cricket Club in Bombay in 1848. Parsi clubs were funded and sponsored by Parsi businessmen like the Tatas and the Wadias. The white cricket elite in India offered no help to the enthusiastic Parsis. In fact, there was a quarrel between the Bombay Gymkhana, a whites-only club, and Parsi cricketers over the use of a public park.

When it became clear that the colonial authorities were prejudiced in favour of English¬men, the Parsis built their own gymkhana to play cricket in. The rivalry between the Parsis and the racist Bombay Gymkhana had a happy ending for these pioneers of Indian cricket. A Parsi team beat the Bombay Gymkhana at cricket in 1889, just four years after the foundation
of the Indian National Congress in 1885.

b) Matches in Sydney could now be watched live in Surat. This simple fact shifted the balance of power in cricket: a process that had begun by the break-up of the British Empire was taken to its logical conclusion by globalisation. Since India had the largest viewership for the game amongst the cricket-playing nations and the largest market in the cricketing world, the game’s centre of gravity shifted to South Asia. This shift was symbolised by the shifting of the ICC headquarters from London to tax-free Dubai.

Question 3.
Find out the history of any one local sport. Ask your parents or grandparents about how this game was played in their childhood. See whether it is played in the same way now. Try and think of the historical forces that might account for the changes.
Answer:
‘Kabaddi’ is our game. This was played by the Kouravas and Pandavas also. Kabaddi means ‘Continous sounding’. This is called ‘Chik-Chik’ in some areas, ‘Chedugudu’ in some areas. In our region we call it ‘Kabaddi’. This is a game between two groups. Each group has 12 members – 7 out of them will be in the court.
Some rules of the game:

The rules will be framed and changed by the ‘Kabaddi Federation of India’. We have also such federation in our state.
This game had many changes. A change is introduced recently i.e., ‘Bonus Line Point’. When the 6 to 7 members are in the court, the opposite group person touches the bonus line, they get one additional point.
The player should not stop the ‘Sounding’.

Question 4.
How have advances in technology, especially television technology, influenced the development of contemporary cricket?
Answer:
Coloured dress, protective helmets, field restrictions, cricket under lights, became a standard part of the post-Packer game. Crucially, Packer drove home the lesson that cricket was a marketable game, which could generate huge revenues. Cricket boards became rich by selling television rights to television companies. Television channels made money by selling television spots to companies who were happy to pay large sums of money to advertise their products to cricket’s captive television audience. Continuous television coverage made cricketers celebrities who, besides being paid better by their cricket boards, now made even larger sums of money by making commercials for a wide range of products, from tyres to colas. Television coverage changed cricket. It expanded the spectators for the game by beaming cricket into small towns and villages. It also broadened cricket’s social base. Children who had never previously had the chance to watch international cricket because they lived outside the big cities, could now watch and learn by imitating their heroes. The technology of satellite television and the world wide reach of multi-national television companies created a global market for cricket.
Thus the advances in TV technology influenced the development of contemporary cricket.

Question 5.
Prepare a pamphlet on the consequences of commercialisation of cricket.
Answer:

The commercialisation of Cricket – Its Consequences

Matches in Sydney could now be watched live in Surat. This simple fact shifted the balance of power in cricket: a process that had begun by the break-up of the British Empire was taken to its logical conclusion by globalisation. Since India had the largest viewership for the game amongst the cricket-playing nations and the largest market in the cricketing world, the game’s centre of gravity shifted to South Asia. This shift was symbolised by the shifting of the ICC headquarters from London to tax-free Dubai.

A more important sign that the centre of gravity in cricket had shifted away from the old, Anglo – Australian axis is that innovations in cricket technique in recent years have mainly come from the practice of subcontinental teams in countries like India, Pakistan and Sri Lanka. Pakistan has pioneered two great advances in bowling: the ‘doosra’ and the ‘reverse swing’. Both skills were developed in response to subcontinental conditions: the doosra to counter aggressive batsmen with heavy modern bats who were threatening to make finger-spin obsolete and ‘reverse swing’ to move the ball in on dusty, unresponsive wickets under clear skies. Initially, both innovations were greeted with great suspicion by countries like Britain and Australia which saw them as an underhanded, illegal bending of the laws of cricket. In time, it came to be accepted that the laws of cricket could not continue to be framed for British or Australian conditions of play, and they became part of the technique of all bowlers, everywhere in the world.

One hundred and fifty years ago, the first Indian cricketers, the Parsis, had to struggle to find an open space to play in. Today, the global marketplace has made Indian players the best-paid, most famous and for whom the world is a stage. The history that brought about this transformation was made up of many smaller changes: the replacement of the gentlemanly amateur by the paid professional, the triumph of the one-day game and twenty twenty as it overshadowed Test cricket in terms of popularity, and the remarkable changes in global commerce and technology. The business of history is to make sense of change overtime. 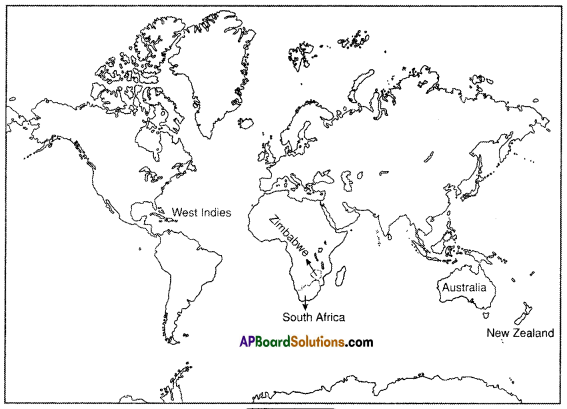 Project
Collect information about any one game. Write the history of the game in the form of a report.
Answer:

Kabaddi is the state game of Indian states of Tamilnadu, Maharashtra, Bihar, Andhra Pradesh, Telangana and Punjab.
Kabaddi received international exposure during 1936 Berlin Olympics, demonstrated by India.
The game was introduced in the Indian National Games at Calcutta in 1938.

Kabaddi was popularised by Indians in Japan also. Nowadays Women Kabaddi National Tournment were also conducting in India. It was included in Asian games also.

Question 1.
What has been the relationship between the cricket and the idea of developing western culture? (Textbook Page No. 249)
Answer:
Cricket was invented in western country England. It was made popular in its colonial countries. Most of the changes were made by them only. So encouraging the cricket means the idea of developing western culture. This has been the relation.

Question 2.
List the changes that occurred with end of dominance of Test cricket. (Textbook Page No. 250)
Answer:

Question 3.
Answer the following questions. (Textbook Page No. 246)
1. Do you like to play games?
Answer:
Yes.

2. What games do you play?
Answer:
Khokho – Volleyball, Badminton.

4. Think of some sports which only girls or only boys participate.
Answer:

5. Are some games played only in the villages?
Answer:
Yes, Chedugudu.

6. Are some games played only by very rich people?
Answer:
Yes, Golf.

Question 4.
Why do you play? (Textbook Page No. 246)
Put a (✓) if you agree with the reason given. Put (✕) if you disagree. If you find other reasons add them to the list.
Collect the views of all the students in the class and find out which reason is considered most important.
Answer:

The following reason is considered most important.
“Games keep the body healthy”.

Question 5.
Did you notice that there is no single country called West Indies? Identify one of these islands that has the best athletes in running. (Textbook Page No. 247)
Answer:
West Indies are the Carribean Islands. They were present from 1958 to 1962 only on that name. At present some of them were sovereign islands, some are parts of St. Kitts and Nevis, some are dependable on UK and some on Dutch and one on U.S. So there is no single country called West Indies.
“USIAN BOLT’ is the best Athlete in running. He is from Jamaica Islands.

Question 6.
There are different sports equipments to play games as you can see here. You may notice that they are of very different quality than the one’s available in your local market. Do you think such equipments will be affordable for children to play for fun as against professional adults playing game for making money? (Textbook Page No. 249)
Answer:
These all are very costly equipments. No common man or player can buy these. 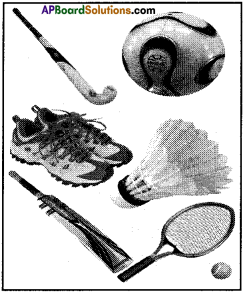 Professional adults earn money by playing with these equipments. In addition to this many big companies sponsor them. So they can buy.

Question 7.
After thinking about cricket for sometime Vinayak listed a few words that are only in English language – ‘boundary’, ‘over’, ‘wicket’. Can you explain to him why there are no Telugu words for it? (Textbook Page No. 251)
Answer:
Yes, I think I can explain. Cricket was invented in England. So the related words are all in English. It is not so easy to translate the words into Telugu. So they are not in Telugu.
For example, we have ‘Kabaddi’ –
We cannot translate this into English. We pronounce it as same in any language. (Textbook Page No. 247)

Question 8.
Locate the cricket playing nations in your atlas.
Answer:
Self exercise.