These indicate freedom of religious practice.

Question 3.
Find out some examples of different views within the same religion.
Answer:
Yes, there are 3 main schools of thoughts in Buddism.

Question 4.
The Indian State both keeps away from religion as well as intervenes in religion. This idea can be quite confusing. Discuss this once again in class using examples from the chapter as well as those that you might have come up with.
Answer:
The Indian Constitution mandates that the Indian State be secular. This is according to the ideals of our Constitution, e.g.:

Question 5.
Read the paragraph under the heading ‘What is Secularism?’ and comment on it.
Answer:

Question 2.
Re-read the introduction to this chapter. Why do you think retaliation is not the proper response to this problem? What would happen if different groups followed this path?
(Textbook Page No. 223)
Answer:
I think retaliation in not the proper response to this problem because, it is not the solution. We are living in a secular country. We follow the principles of great personalities like Gandhiji, Buddha, Ambedkar etc. If this path of retaliation is followed – non-voilence would prevail everywhere and we can see unrest in the society. 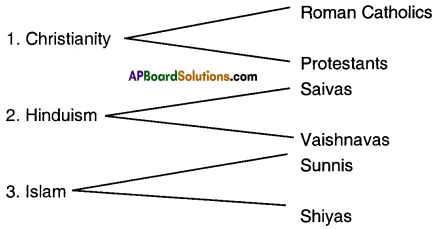 By observing all these we can say that all the famous religions have different views.

Question 4.
Can you think of a recent incident, from any part of India, in which the secular ideals of the Constitution were violated and persons were persecuted and killed because of their religious backgrounds? (Textbook Page No. 226)
Answer:
Not in recent past, but in 2002 Gujarat violence was a series of incidents starting with the Godra train burnings and the subsequent communal violence between Hindus and Muslims in the Indian state of Gujarat.
On 27.4.2002 the Sabarmathi Express train was attacked at Godra by a Muslim mob.
58 Hindu pilgrims returning from Ayodhya were killed in the attack. Out of them 25 were women, 15 were children. This in turn prompted retaliatory attacks against Muslims and general communal riots on a large scale across the state.
Later it was known that it was a preplanned attack.